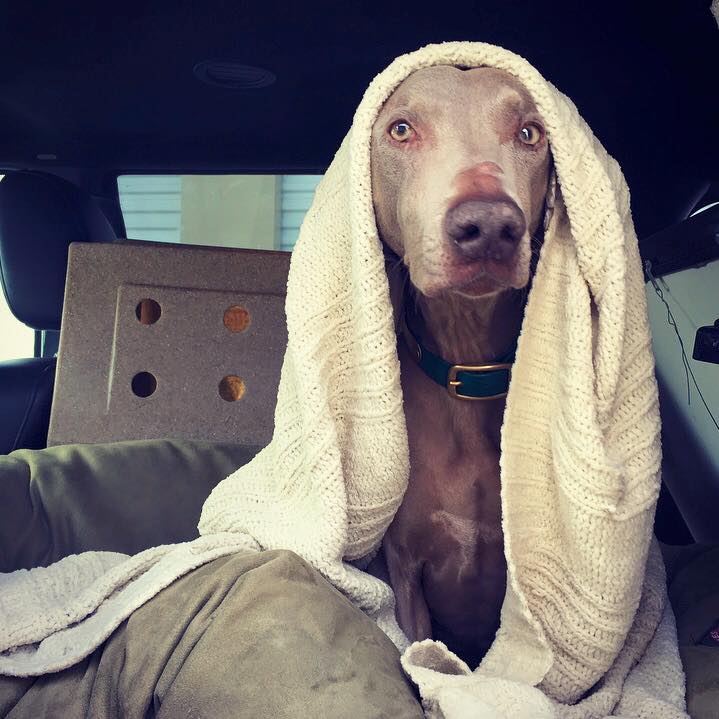 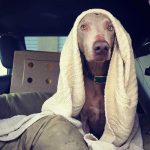 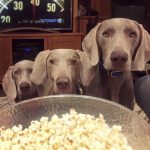 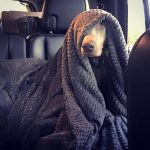 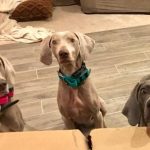 Britta (Unidentified Sperm Donor x Nobody Knows) is nine. Britta is a Weimaraner. Maybe. No one really knows. The truth is, she was purchased from a newspaper ad and the “breeder” promised to send the AKC registration in the mail. This was long before we knew how to properly buy a dog. Of course, the papers never came. (A few months later, the phone was disconnected.) But she looks, walks, and talks like a Weimaraner, so we’re sticking to it! Britta is spayed. She has no offspring. Her tail’s too long. Her coat’s too short. She has a good dose of anxiety and broke a tooth once eating her crate. We’re also on kitchen door # 2 because once upon a time, she ran through kitchen door # 1 at full speed. But she is our resident queen and has no problem taking the Auntie Britta role when it comes to raising Friday’s babies. She’ll also play with them, because, you know, Friday is too snotty to entertain her own children. #truestory Seriously though, this is the lady that hooked us into the breed, and the first-born will always hold a special place in our hearts. These days, Britta spends a lot of time sleeping. And being cold. And NOT peeing when it’s wet outside. If anyone here isn’t excited about our move to Utah, it’s this one. She’s a sunshine girl, and gray weather makes her chilly. When not angling for popcorn, she takes her role of FUN POLICE very, very seriously, and patrols the house like the boss she is. Under her watch, puppies are not allowed to come up from behind, steal food out of the bowl, jump up on the sofa, or play with whatever toy she happens to have. In other words, she’s the mean aunt that no one wants to be sent to for babysitting, but you bet that when they are, they magically have a greater level of respect for elders.