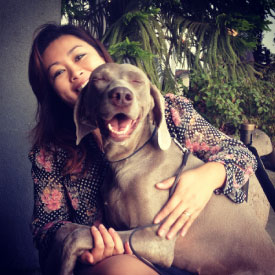 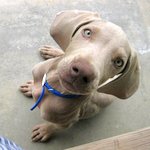 Barrett Weimaraners was established in May 2009 when Barry and I (Kim) answered an ad in the Pennysaver for AKC Weimaraner puppies and brought Britta home as an 11 week old puppy. Her breeder was a really nice lady who wrote up the puppy contract on the spot on a blank piece of paper, and promised to send us AKC papers later, once she got them. Eleven years later, we’re still waiting for them to arrive. LOL. It was Britta’s severe separation anxiety and other “special needs” that made us realize that we shouldn’t have purchased the first puppy we could get our hands on, and raising her sparked our desire to own and produce better-bred Weimaraners. 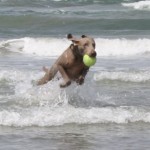 In 2009, it was just me, Barry, and Britta. We were just regular people whose lives revolved our spoiled brat of a puppy, and we spent every single Saturday at Huntington Dog Beach in Southern CA. This was a time before Facebook Pages and Groups existed, so we networked with other Weimaraner Owners through an online forum called Weimaraner Addict. (A decade later, we’re still really good friends with many of the folks we met during that time.) My avatar for the forum was “BrittaBarrett.” Barry and I weren’t married at the time so it seemed fitting to give Britta a last name that was relevant to both of us: Our house was on Barrett Lane, so “Barrett” it was! 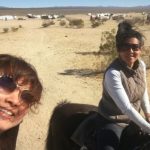 In 2010, we starting spending some time with Anne of Touchstone Weimaraners, mostly in the Mojave Desert at the Field Trials (a sporting event to showcase serious hunting dogs). The more we learned about Anne, how involved she was with the Weimaraner breed, the more we wanted to be involved, too. We spent many weekends that year catering food for local field trial events, and met with some incredible people who we are still friends with today. Anne also babysat Britta for us the weekend Barry and I decided to elope to San Francisco. 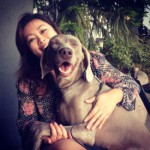 In 2011, Friday came along and changed our lives forever. We went from being normal people to weekend dog show warriors with the purpose of showing our new girl. (Because our friend and mentor Anne told us we had to, LOL.) It was a long year and a half, but with the help and friendship of the Weimaraner community, Friday earned her Show Championship title. And then the “b” word was whispered… breeding. 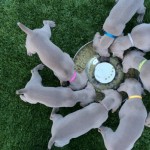 Friday’s first litter arrived in June 2013. It was a wild and crazy entry into the world of breeding Weimaraners, but we were hooked. The next few years found us with more success and accolades than we ever thought we’d ever achieve, and we enjoyed every second of it. (Friday’s kids went on to earn placements in their Field and Show Futurities, and her son Boulder also won the Western Maturity in 2016. We bred dogs that easily finished their Show Championships, earned placements at the Field Trials, and aced their NAVHDA Natural Ability Tests.) More importantly, we developed friendships with Weimaraner owners and breeders all over the country, including Canada. And we mentored those in our own Barrett network to spread their wings and become breeders in their own rights. [See also: Paying it forward.] 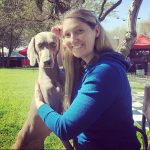 In 2018, Erin Smith had her first litter under “BaseCamp Weimaraners” with her 2014 Torque x Friday kid, “LadyBug,” and in 2019, Brent Saxton had his first litter under “L&L Weimaraners” with his 2016 Boulder x Seren kid, “Elleven.” Stacy and Gene Yochum also joined the Barrett family with their 2018 Judd x LadyBug kid, “Josie,” and will be breeding under the Barrett name in 2021. It’s a great feeling to be able to share the wisdom and knowledged I’ve learned with the second generation of The Barrett Collective.

The year is now 2020. We no longer live on Barrett Lane in Orange County, but can you believe we actually sold our house to a friend we met through Weimaraners?! Paula and Sophie live there now, and continue the tradition of warm nights on the patio with a small fire, glass of wine, and a gray dog. 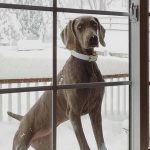 Friday is 12 years old. She’s sitting on my left as I write this. Her son Boulder is now 7 years old and is sitting on my right. Boulder’s daughter Mango is 3 and she’s upstairs in her crate (with the crate door open, because Mango puts herself to bed every night when she’s tired). By this time next year, we will probably have a Mango son or daughter sitting on our sofa, too. Oh, and Britta’s still here. She’s 11, our resident Queen, and still a nut, but we love her anyway. And then there’s Jynni, the newest addition to the gang. She’s a Friday granddaughter and Mango’s first cousin. Jynni is sunshine.

We currently own property in Southern Utah and have a house in Tehachapi, California. We’ve expanded our brood to include two horses and a gaggle of chickens. We’ve traded city life for country life, stilettos for spurs, the ocean for the mountains, and love every second of this journey we’re on. [See also: Weimaraners changed our lives.]

National and Regional level competition takes us to interesting places we wouldn’t see otherwise, and the friendships we’ve made in the last decade have been incredibly meaningful and fulfilling. Here’s to the next ten years of joy and gratitude. Cheers!!! 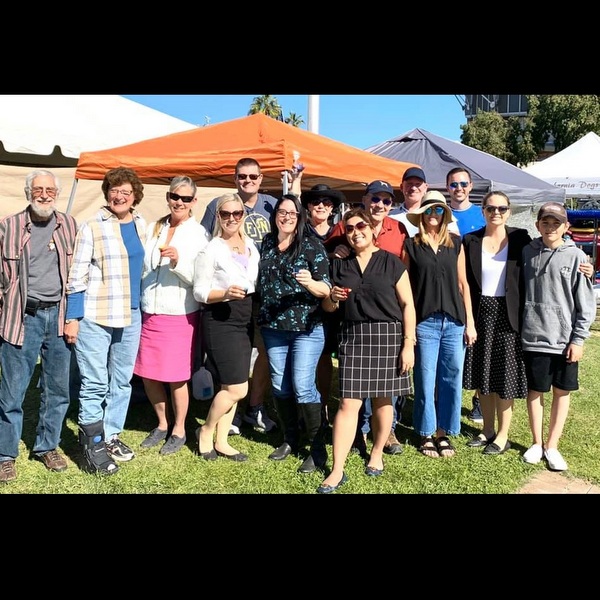 The Barrett Collective – February 2020 at the Valley of the Sun Weimaraner Club Specialty Show in Phoenix, Arizona