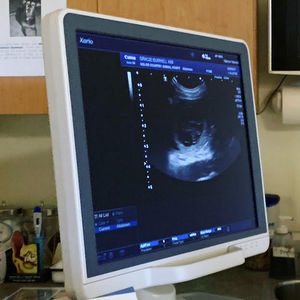 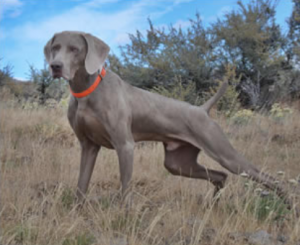 Bowie has definite star-power. He applies himself with intelligence, enthusiasm, sweetness and style to every task, with hunting and heeling at the top of that list. He has been a natural for obedience competition where he scored 198.5 the first time he set foot in the ring and completing his CDX title with a top score of 197. Bowie is flat crazed for birds and will do anything, and I do mean anything, to get to them. No surprise then, that he earned both his Derby points while still in the Puppy age division. Bowie has been steadied to wing and shot and in addition to a Master Hunter title he has an all breed Open Gun Dog major stake win to his credit.

Gracie lives to run and has loads of style. In April 2015, Gracie became the first-ever Barrett dog to be field pointed by winning an Open Puppy stake at a Northern New Mexico Brittany Trial. Later that month, Gracie picked up another Puppy Point with her First Place ribbon at the WCA Western Classic in Madras, Oregon. By June 2015, Gracie had also picked up a few show points, once even going Best of Opposite Sex over Specials for her first Major (at the Del Monte Kennel Club shows in Carmel, CA). In July 2015, Gracie earned the Second Place Junior Futurity Bitch ribbon at the Western Futurity and Maturity in Portland, Oregon. In December 2015, she picked up a nice Second Place ribbon in the Open Derby stake at the WCA National Field Trial in Ardmore, OK. In June 2016, Gracie picked up her Third Major and finished her show career. At home, Gracie is easy-going, sweet, loyal, and protective. We will be getting her back out to the field trials after she raises her upcoming litter.

The purpose of this outcross breeding (the COI over 10 generations is 2.945%) is to produce a healthy litter of Weimaraners who have excellent cooperation and desire to please, while excelling at hunting game birds with independence and style.

The best puppies out of this litter are expected to do very well in AKC field trials. Those with not as much independence, range, and ground speed will do well as personal hunting dogs or companion dogs.

Puppies will be raised in Southern Utah (two hours north of Las Vegas), but can be delivered to their new homes in Southern CA, Arizona, Southern Nevada, and New Mexico.

Please submit an online Prospective Owner Questionnaire if you might be interested in a field trial prospect or personal companion. We’ll reach out once we’ve had an opportunity to review your submittal.

Thank you! – Kim and Erin 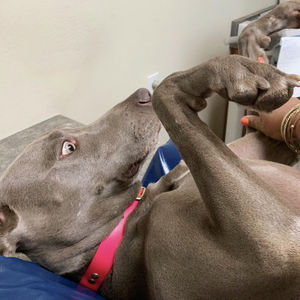 Photo of Gracie in the exam room upon learning she was indeed pregnant. LOL!