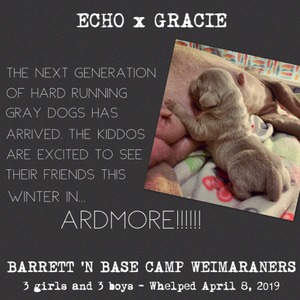 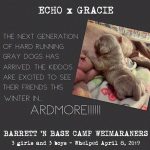 Day 0 (Monday, April 8th). The 2019 Echo x Gracie litter was co-bred by Barrett Weimaraners and Base Camp Weimaraners, and is so incredibly special to both Erin and me. Gracie is the product of a first generation Barrett breeding back in 2014 with the goal of producing beautiful working dogs; pretty enough to finish on the bench and talented enough to finish in the field.

In the last five years, we’ve learned a lot about what it takes to produce such a dog. The show stuff was easy; Gracie finished easily in a handful of shows, and also earned a placement in her Show Futurity. The field side, however, has been more of a learning process than anything else. 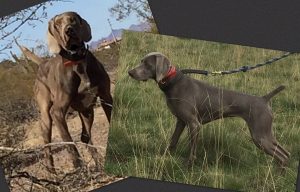 Gracie had enough natural talent to get her through the field trial juvenile stakes, but she lacks the grit to make it to the big leagues (gun dog stakes). Erin and I believe she brings much to the table, and if bred to the right dog, could produce a litter of Weimaraners who might have more success.

Enter ECHO, the son of a dog who has consistently produced outstanding field trial Weimaraners. Echo himself is a true medium-sized dog, and boasts a nice, balanced structure. Friendly, fearless, fast, and tough, we hope he’s just the ticket to our future success.

As mentioned in the litter announcement, we’re not placing any of these these puppies. At least, not yet. Not at eight weeks old. Not until we know what we have.

The below will simply be a photo journal to chronicle the litter as they grow. Thank you for sharing in our joy! 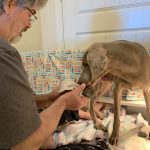 Day 0 (Monday, April 8th). It was mid-morning. I was battling a nasty cold and hadn’t gotten out of bed for the day. Dozing in and out of sleep, I vaguely remember Barry nudging my shoulder, whispering to me, “hey, hey, Gracie’s having her puppies.”

Well, THAT got my attention. Gracie wasn’t “due” for another couple of days but I bolted out of bed. By the time I made it down the hall and into the whelping box where Barry had placed Gracie, she had given us two puppies.

Over the next couple of hours, we delivered another four. A perfect split of three boys and three girls. 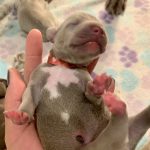 They say that the calling card of a good field trial dog is the “mark of excellence.” We know it as the white blaze on the chest. I wouldn’t be surprised if Erin heard me screaming for joy, all the way from Boston, when PINK GIRL arrived. Boy, does she have white!!! For no scientific or logical reason, she’s my favorite girl. 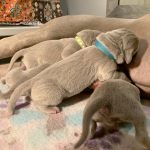 Day 2 (Wednesday, April 10th). It’s important to note that Gracie’s puppies are the most vigorous I’ve ever seen at birth. BLUE BOY, in particular, came out with a pair of thunder thighs, which he put to good use the moment he hit the ground. I swear, that kid was WALKING himself across the whelping box at just a minute or two of age. Two days later, he continues to be robust, strong, quick, and hungry. My spidy senses tell me he’s going to be a good one. 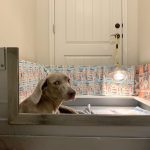 Day 3 (Thursday, April 11th). I shouldn’t be surprised, but I am; Gracie is one of the BEST nursing mothers I’ve ever had in the house. She’s in the whelping box 24 hours a day. I only see her getting out to eat, drink, or potty… and then she’s right back at it again. Her puppies are also the cleanest I’ve ever seen; Gracie is incessant about licking them. I’m surprised they’re not bald! I feel bad for making her wait almost five years to become a mother. I’m sorry, Gracie!!! Tails and dewclaws were also done today. It was uneventful; hardly any bleeders and everyone went right back to sleep. 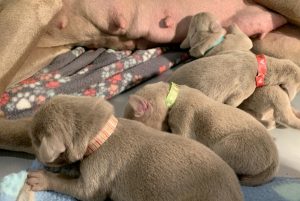 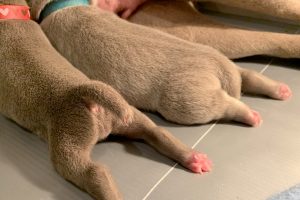 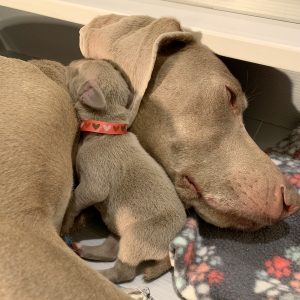 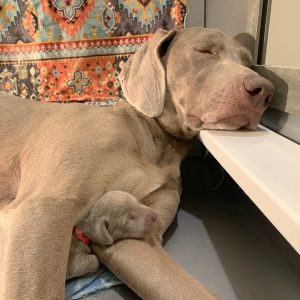 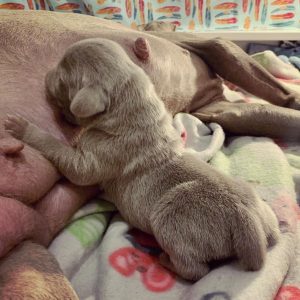 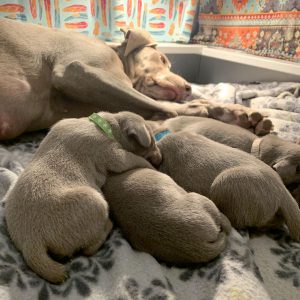