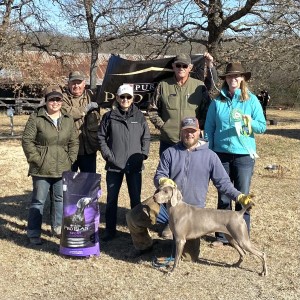 SIERRA (2019 Bowie x Gracie) was awarded Third Place in the National Field Futurity yesterday. As one of her owners, I can say that I am very appreciative of the placement. I also want to say a few words:

To me, the Field Futurity is a stake where a dog’s village (breeders, owners, trainers, and handlers) presents to the world, HERE’S OUR INTERPRETATION OF THE NEXT BEST THING OUR BREED HAS TO OFFER. It’s “the future” of field trial dogs. Hence, FUTURITY.

As the stake manager for the National Field Futurity, I was compelled to share my opinion with our two judges, which was, “Please don’t feel obligated to award a ‘First’ placement if you don’t feel any dogs you see this morning has enough merit to earn it.” Fortunately, they were already on the same page.

As a handler in the stake this year, I had two bullets in the chamber. One didn’t have birds, but even if she did, she lacked application. The other lacked a lot of things, but she was also the only dog of the day that checked the “point a bird” box. Good enough to win? Certainly not. And if I thought she might, I would have hooked her at 29 to demonstrate my own judgement.

There are two things everyone needs to know about this sport, game, whatever you want to call it.

The game is not supposed to be “easy.” This isn’t a place where you get a ribbon for showing up. (And if it is, I don’t want to be here.) But back to the game, what I love about it is that it requires among other things, Preparation. Dedication. Perseverance. Success only comes after a mastery of such elements.

Just like people, dogs come from different pedigrees, and in all shapes and sizes. And level of aptitude. Competing with a dog who literally carries the blood of field dogs who came before him is not a magic bullet, but it does stack the cards in your favor. Even then, you still have to come prepared. Be dedicated to honing your craft. And if you lose, come back next year even more prepared. Or don’t. 🤷🏻‍♀️

So I did I really expect to come in and win the whole stake?

We’re here on a hope and a prayer, and the odds weren’t in our favor. Fortunately, I know what I have and I know what we need to work on. And if we’re successful, we’ll be back in a few years. In the meantime, I agree with the judges’ decision to withhold First and Second, and I know that if I want to win next year, I better be more prepared.

Someday, when we do win the National Field Futurity, I want it to be worth every blood, sweat, and tear it took to get there. I want to beat other very worthy participants. I want to jab my friends in the shoulder and say “I whooped your ass this year.” 😉

Times are tough. Entries are down. Regardless, I’m in support of nixing regional events until such time that entries are back up again. In the interim, I’m in support of having one National Field Futurity, in a program that is separate and apart from the Show Futurity Program, and if the dogs don’t perform, I’m in full support of withheld placements.

Finally – Congratulations to Carey and Rhyme on their placement!!!! 🎉
And thanks for coming to my TED-TALK. 😇

Holly McKnight – Nelssen
Agree on so many levels!!
Congratulations to you girls on the placements you did receive!
MaryBeth Brown
Thank you. That answered a lot of my questions

Spot on Miss Kim! Not my game but I’m very happy to see judges placing quality not handing out ribbons! Congratulations to the two that earned placements! Well done!

Bryan Reynolds
Thank you Kim Burnell ya pretty much nailed it.
Lisa DeLeonardo
Well said Kim. Spot on. And I’m super excited to run in the Field Futurity next year!!
Nicolette Goetzman
Congratulations

Cindy James Moore
Well said Kim!!! Thank you for writing this. This was the second Field Futurity this year that 1st & 2nd were withheld. I am sure there are a bunch of people that are not happy about it but I commend the judges for not awarding the placements if the dogs did not deserve it.
Congrats to you and Carey for your placements.
Stephanie Tsantes
A very humble and compelling post.
Rmac Alexander
Well written Kim !
Gretchen Zechzer
As someone new to Learning this game ..this is great knowledge to have. Thank you for taking the time to post this
Cindy Long
A huge YES! Thank you for posting this!
Mia Jules Richmond
Appreciate and admire your integrity
John Nelssen
Well said Kim, the futurity system is in dire need of overhaul. There was a time it was the premiere breeders event and deserves to be again. It’s our benchmark, it’s that important, save it.

Good words, and you are honest. Congras.

Carey Killion
Kim Burnell spot on, and I couldn’t agree more. I spent the better part of a year preparing my girl for this stake. Did I come here to win? Yes. Did she run well? Yes. But she didn’t have a bird of her own. Sometimes that’s the way it goes, and that’s all part of the game.
Congrats to you and Sierra on your placement!

Vickie Margolis
Nicely said.
Rick Petersen
I agree with your comments about performance, but I’m not sure why the placements started at 3rd.
Rodney Moon
Rick Petersen, because the judges didn’t feel that any of the dogs performed well enough today to deserve a higher placement. That’s just how it goes sometimes and it shows the integrity of the judges.
Rick Petersen
Rodney Moon I understand withholding, so championship points aren’t awarded. But I’ve never understood withholding beyond that. In this case, I think there were 7 dogs, so only first would have been awarded points. So withhold 1st and award 2nd on down. I get that the dogs didn’t perform, but there is nothing in the rules that call out a standard for second place, third place, etc. so not sure how to decide that a dog didn’t meet second place standards, but did meet third place?
Rodney Moon
Very well said.
Congrats on the placement with the dog I bought for a song in the Calcutta!
Esteri Randlett Hinman
My feelings exactly. Thank you for expressing it so beautifully and clearly
Krystal Crighton
Congratulations, well said!
Kelly Bagley
WURD

Nicely said my friend!!
Jodi Dedels
Congratulations and I enjoyed the read.
Coto Paxi
Kim, so well said, thank you!
Melissa J Hampton
Huge respect to you Kim and all involved in this!
Susanne Wilson Purchase
Well said
Marilyn Black
Well said Kim! Thank you!
Barbara Cook
Congratulations on your accomplishments!
Stacie Roberts
Well said. Great job to everyone who went out and did their best. Lots of hard work goes in to being there.
Dessie Butterworth
Back in the day the judges placed the dogs by their performance and withheld the placement if they didn’t deserve it then as time went by I watched placements given they didn’t deserve but alas my days were over but I still watched read and saw the entries so low and I would remember the days we had so many. Today I read this message and it made me feel so good to realize there’s people still around who want to keep our breed alive and honest as we used to say there’s always next year Congratulations to all. Thank you Kim
Marilyn-Paul James
Well done!