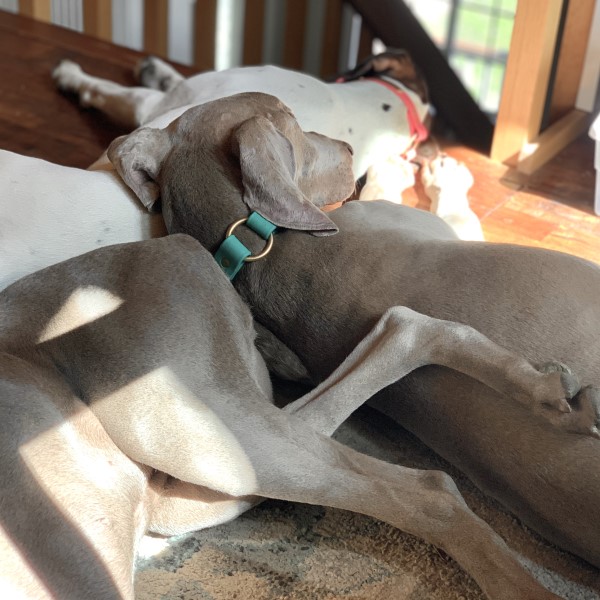 AN OPEN LETTER TO PEOPLE WHO ARE LOOKING FOR A PUPPY RIGHT NOW:

Once upon a million years ago, my new boyfriend invited me out for a “weekend getaway.” First vacation together! Wow! Destination: Provence. France. Iles Sur La Sorge, to be exact.

Over a five course dinner, complete with l’aperitif and le digestif, my beau and I talked about our hopes and dreams, did that googley-eye thing across the table, and… admired a French couple sitting next to us who had a beautiful gray Weimaraner resting at their feet.

So we cracked open the newspaper and started calling around.

The first home we visited was in Whittier. There were two puppies available. They were both huddled under the motor home that was parked on the driveway. One barely came out. The other one did not. We were never invited inside and we never came back.

The second home we visited was in Phelan. A mom and her two kids greeted us. We wanted a girl, so they sat us down in the living room and brought in two little pups.

They let us pick, so Barry picked the smaller of the two. She was also the one that climbed into his lap.

We felt pretty good about “avoiding the disaster” if we had picked one of the Whittier pups. These pups were way better. They were raised in a home! The kids loved them! They came vaccinated!

Lordy, were we in for it. To make a long story short, because many of you know this already, BRITTA (who turned 11 this year) was HELL IN A HANDBASKET.

As it turns out, she didn’t come from a reputable breeder. Our first clue was that the phone number was disconnected shortly after we got her, and the AKC papers that were supposed to come in the mail, never did. The second clue should have been the purchase agreement, which was drawn on the spot, on a piece of scratch paper.

But she was AVAILABLE NOW.

And 12 years later, we’re still managing her quirks and idiosynchrocies, but that’s all we can do. She is who she is, and no amounting of training or socialization will ever, ever change her. It’s in her DNA. Simple as that.

As now breeders (and because of Britta), one of our primary goals is to educate the public about responsible breeding.

In general, responsible breeders don’t always have a puppy available. And because of that, when they have a litter, the interest list is full with people who got on their radar 9-18 months ago.

Availability is different for every breed. In Weimaraners, if you just started looking for a puppy last night, and by this afternoon you’ve found an available puppy NOW from a reputable breeder, I have one piece of advice for you:

GO BUY A LOTTERY TICKET. Because you’ve just managed to secure something very few people have.

If you want a puppy NOW, I’m not here to change your mind. I just want you to know what you might be getting yourself into. 😉

As for Britta, we committed to her, 200%, from the day we brought her home. She has run us about $25,000 in veterinary bills, destroyed our furniture, and has to come with us everywhere we go… because she is THAT DOG that has flown through windows and broken ROUGH TUFF kennels if she’s left behind. But Barry and I will love her until the day she goes, and I’d be homeless before I gave her up. Ironically, she hasn’t slowed down a single bit so we probably have 5 more years with this beast. 😂

People whose first Weims are a dog like Britta usually end up turning them over to rescue. I know; I’ve fostered plenty of them and they’re overwhelmingly neurotic and anxious. 0% of those dogs are from responsible breeders, because responsible breeders don’t let their dogs end up in rescue.

Barrett Weimaraners (in Southern California) has reviewed OVER 100 PUPPY APPLICATIONS IN THE LAST 30 DAYS. WOW, doesn’t even begin to describe it. Unfortunately, no one is getting a puppy from us “right now” because we just. don’t. have. them. available.

When you buy a puppy, you are supporting where your dog came from. Please be patient and choose your breeder, first. This is because your breeder will BE THERE FOR YOU, FOR ANYTHING, FOR LIFE. We can’t guarantee your puppy will be 100% perfect (umm, no one can). But we’ll be in your corner, no matter what, if anything goes sideways. Once you’ve found this person, the right puppy will follow.

Buying the first thing you see reinforces to the probable backyard breeder that their business model works. They just made a bunch of money off of you. And they’ll use it to make more. (Oh, and if they drive a Range Rover and they DON’T have a day job? That’s a flamin’ hot, steak-searin’ red flag.) And when these dogs need help, they’re nowhere to be found. It’s rescue and the general public that will jump in to help them. Please don’t perpetuate that cycle.

Back to Britta. Britta is an asshole. She’s usually the one in the corner giving herself a time out because she doesn’t like the other dogs in the house. To all of them, she’s “crazy Aunt B.”

So today, when I saw Britta resting her head on SQUIRT, and JYNNI resting a leg on HER, I just about had a meltdown. This is the closest to being a “normal Weim” I will ever see in Britta. ❤️

I had planned on just posting a cute photo and making y’all go “awwwww…” but it’s Friday and I had a few minutes to spare.

So thanks for reading today’s commentary. 🥰