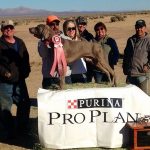 Baja was “Orange Boy/Arnold” out of the 2016 Rossi x Mika litter. From Day ONE, Baja’s parents were committed to training him and handling him. In just a couple of weekends in February 2017, Baja earned his Junior Hunter title in four straight passes. He also has his Novice Shooting Dog title from a WCA ratings test. In Spring 2017, Baja also earned a perfect FOUR score in every single NAVHDA NA test category… except the pointing one, in which he didn’t earn a score. (Bummer!!!) But that’s okay, he eventually earned a Prize II a few months later. In February 2018, with hardly any training at all, Baja and his dad came out to the WCA Western Classic and Field Futurity, and WON!!! Next up is formal training to see if we can unlock some of that hidden talent. As time permits, Baja will also be making a few laps around the local show rings. Baja’s pedigree can be viewed here.