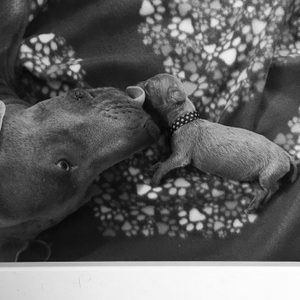 The last seven days had been trying. Anne and I had been hand-feeding the litter of premature puppies, every two hours for 24 hours a day. 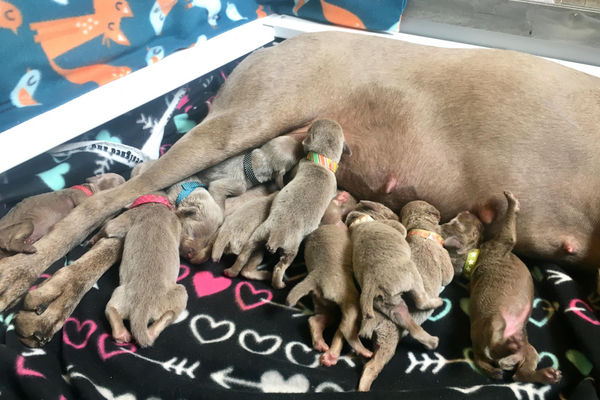 But this morning, we made it to the “one week!” milestone and woke up to ten thriving puppies. The weight chart had flat-lined somewhat, but we expected that because tails and dewclaws had just been done (by my fabulous new local vet!), and we were actually thrilled the kids didn’t lose too much weight. Bonus: Itty Bitty Red Collar Girl was UP, and we finally hit a point where puppies were learning to zip across the whelping box.

And then the day went horribly wrong.

The first punch to the gut happened around 1:45 PM when I reached into the whelping box and pulled up a cold puppy. It was Navy Girl. My immediate reaction was, FUCK. What happened to her? Anne and I had just fed her two hours earlier and she took her meal like a champ. But now wasn’t the moment to guess; it was time to tube feed the puppies again.

As per our usual routine, Anne pulled out the puppies to potty them while I warmed up their milk and got their syringe and tube set-up. We fed Pink, Blue, Chestnut, and Orange. Finally, it was Itty Bitty Red’s turn. I inserted the tube and slowly pointed it down to the end of her rib-cage. There was zero resistance. When the mark on the tube reached her lips, I knew I was in the right place. (The textbooks will tell you that if you inadvertently go down the trachea, the tube wouldn’t go in as far.) I then slowly pumped the syringe of formula (exactly 8 ccs because she was only 8 oz. in weight) into her belly. Once that was done I slowly pulled out the tube and Anne headed back to the whelping box to set her down.

And then I screamed. THERE’S BLOOD ON THE COUNTER.

At that very moment, Itty Bitty started gasping. It took me a nanosecond to figure out that something was very, very wrong. I don’t know for sure what happened, but she was either fed straight into her lungs, or I punctured her tiny little tummy with the end of the tube. Regardless, Itty Bitty was ghastly injured… and it was ME who did it to her.

I held my mouth up to her face and I sucked as hard as I could. Then I tried “the accordion method” to get some fluid out of her lungs. Then I rubbed her hard and fast. And then I resorted to swinging her.

I lost track of time, but finally gave up when she was cold cold cold. (The timestamp on the phone later confirmed it was about a 30 minute effort.)

It’s one thing to lose a puppy because it was underdeveloped, or otherwise sick. Or maybe mom accidentally rolled over it in the middle of the night and there was nothing that could be done. It’s another thing to have something vigorous and strong, overcoming so many obstacles such as temperature and calorie intake… and to know that you were directly responsible for her death.

The guilt is tremendous.

Just before it rained, Anne helped me get the girls outside. We found a little spot for them, and when the weather cools, I’ll plant a flower garden around them. 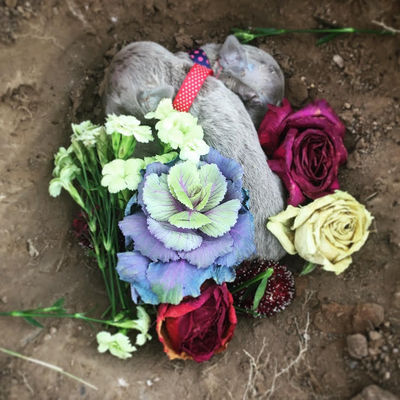 Breeding isn’t all sunshine and unicorns. While I’ve always known that, to be tested in so many ways in the last seven days has been a real eye opener. The good news is that Anne and I have learned a LOT with this litter, and we’ve picked up a few skills that will absolutely make us better breeders.

I don’t regret for one second breeding Luna, and I’m hopeful that the remaining puppies continue to thrive. We’re still not out of the woods; but we forge on. 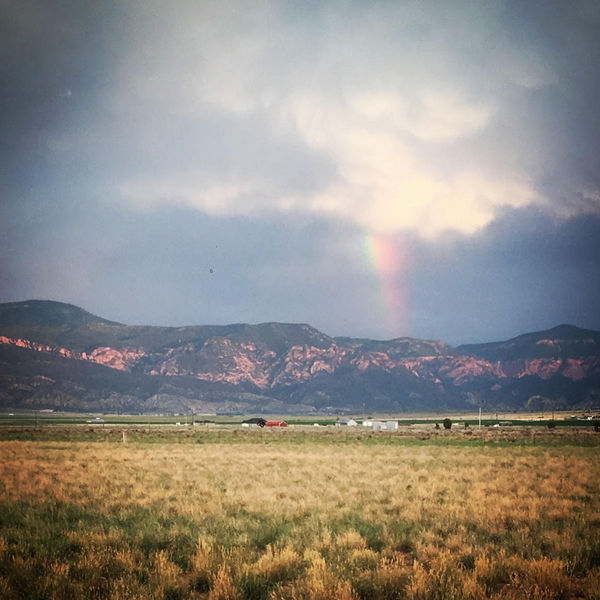 At 8:22 PM, I looked out the back slider and discovered a rainbow coming down from the clouds. In my heart, I know it’s the girls letting me know that they made it to the Bridge okay, and that they’ve found their Barrett friends, Ashley, Sparkle, and Geti.

Tomorrow is a new day. Anne and I have eight puppies to look after. As exhausted as we are, we’re also stoked that we started bottle feeding tonight, and that appears to be going well.