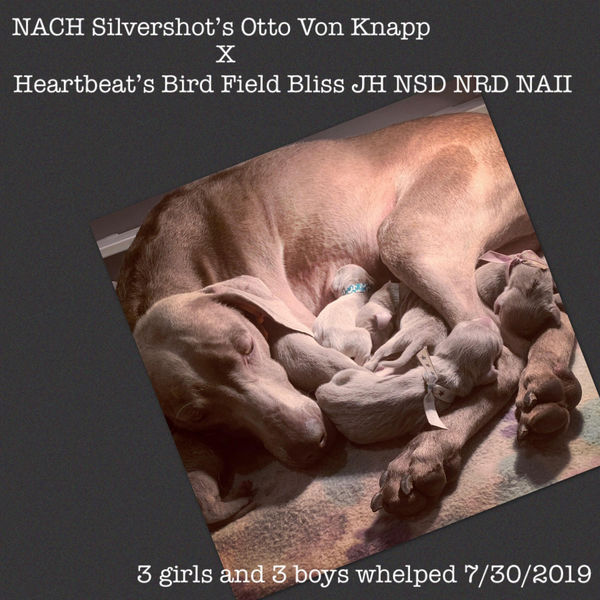 We’re please to announce that the Otto x Bliss puppies have arrived! And… they’re currently about 3.5 weeks old.

First, I have to apologize for the slow update. We had house guests over the week the puppies arrived, and then I got really, really sick. So sick, in fact, that instead of driving out to California for a dog show in the second weekend of August, I hitched a ride to urgent care. And then spent the next week in bed on heavy duty meds. (I’ve never been this ill before.) And then I spent a week in Washington State at a Weimaraner Specialty Show.

When I got home a couple of days ago, I was pleased to discover that everyone’s eyes were open!!! (And a big thank you to my husband for taking care of everyone while I was away.) Puppies are also toddling around like little drunken sailors.

Let’s go back to the night the puppies arrived, and get caught up on how they’re doing today: 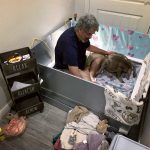 Tuesday, July 30. On Monday night, Bliss ate her dinner as usual. Her temperature was 100.4, so I figured we were in the clear. (The temperature drops to about 98.0 when the bitch is within 24 of whelping.) Around 10:00 PM, we put all the dogs to bed and settled ourselves on the sofa for couple episodes of Orange is the New Black. A few minutes into the first episode, I heard some “digging.” It was Bliss, and she was digging through the blankets in her bed. When I went to check on her, she was panting heavily and wouldn’t settle. We know what this means, IT’S GO TIME!!!!! Fortunately, the whelping box was already set-up at the end of the hallway, right up against our front door, and husband Barry led Bliss in. While they were getting settled, I grabbed a bunch of old rags, a heat lamp, the box of ribbons, some towels, scissors, clamps, suction ball, and calcium paste. 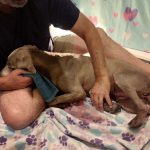 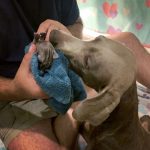 Side note: The dogs have always been “my thing,” and Barry has always been very supportive of my hobbies. This year, he’s stepped it up a bit, helping me with whelping and raising the kiddos. I think he secretly enjoys it, so I encouraged him to do the actual whelping while I passed rags from outside the box. And at 12:08 AM on early Tuesday morning, out came the first puppy. She was breached and took her time coming out; Barry’s instincts were to yank on her little feet and tug her out, but I screamed a hard “NO!!,” insisting that Bliss would get the puppy out herself and everything would be alright. 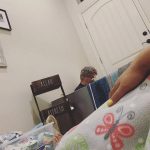 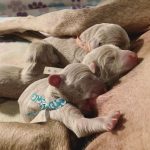 And that she did. For the next couple of hours, Barry whelped a boy, another girl, and another boy. While he did that, I pulled out one of those big round dog beds and cheered them on. By around 3:00 AM, Barry was exhausted and called it a night, so I stepped in to whelp the last boy and the last girl. In every litter, there is a first. For us, it was that all six puppies were whelped in a breach position (feet first). It’s a normal position, but we usually get some that are head first. Regardless, everyone arrived screaming, plump, and ready for their first feeding. 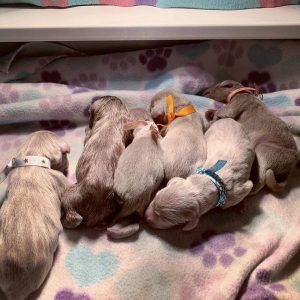 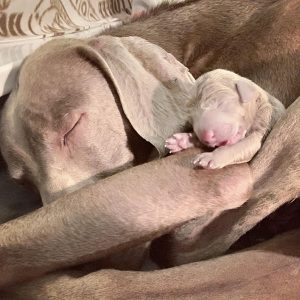 Tuesday, August 6. On Day Three, we started Early Neurological Stimulation with the puppies. (We’ve done this for all of our litters.) We do this until about Day 17, with the hopes that this will help prepare them for their futures. Puppies are also getting manicures every few days; they’ll be exposed to the Dremel (power griding) before it’s time to send them home.

Thursday, August 22. I returned from being in Washington State for a week and found the puppies had DOUBLED in size. Eyes and ears are now open and everyone’s up on their feet. In another week or so, we’ll move them into the living room so they get to see everything that goes on in the house.

Looking ahead: I will be leaving for Greer, Arizona, next week, and be away for almost two weeks. We’ll be attending two weekends of AKC Field Trials with Boulder, Luna, Steven, and Tearin. We’ll plan to train dogs during the week. By the time I get home again, the Otto x Bliss puppies will be about six weeks old. We’ll temperament test them at seven weeks, and make final selections on which homes they’ll be going to.