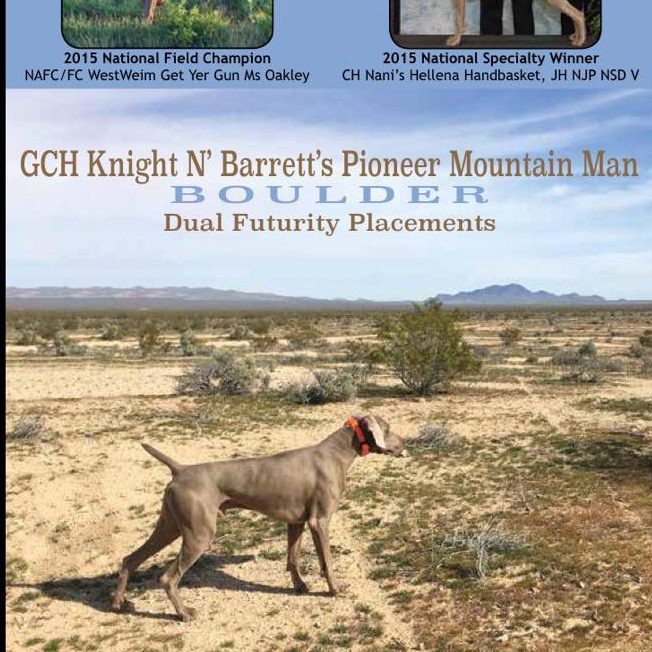 BOULDER was also my Pick Dog out of the 2013 Max x Friday litter. From the time he was four weeks old, I knew this kid was special. In 2014, he earned his show Championship with three Majors in just six weekends out. A day shy of his first birthday, Boulder went off to Summer Camp with Terry Chandler, Sr. In May 2015, Boulder came home for awhile to make an appearance at his show Futurity. One week before his second birthday, he picked up his first BEST OF BREED ribbon at the Mission Circuit under Judge Clay Coady. In July 2015 Boulder earned his bench Grand Championship as well the First Place Senior Futurity Dog ribbon at the Western Futurity and Maturity in Portland, Oregon. In August 2015, with six breed wins under his belt in 2.5 months, Canine Chronicle had him listed as the #18 show Weimaraner. In September 2015 Boulder was ranked # 5 on the WCA Continuous Derby list, and then in December 2015, Boulder picked up a nice Third Place ribbon at the WCA National Field Futurity in Ardmore, OK. In July 2016, Boulder WON the 2016 WCA Western Best Dog in Maturity ribbon.  In September 2017, Boulder earned a very nice Second Place ribbon in the Open Gun Dog class (with 23 starters) at the Sahuaro Brittany Club Field Trial. This was only his second weekend out as a broke dog! Boulder is owned and loved by me when he is at home. At the shows, he is exclusively handled by Robert Scott. When on the road running the field trial circuit, he’s on the Rugerheim string.

Boulder has his own Barrett page here, and his pedigree can be viewed here. 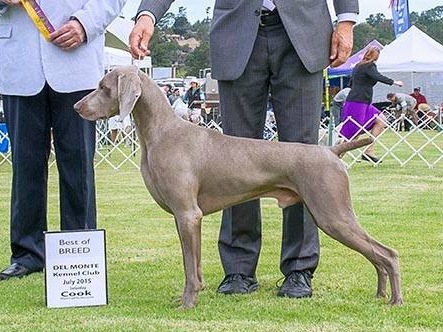 Best of Breed under Judge Walter J. Sommerfelt. Thank you! 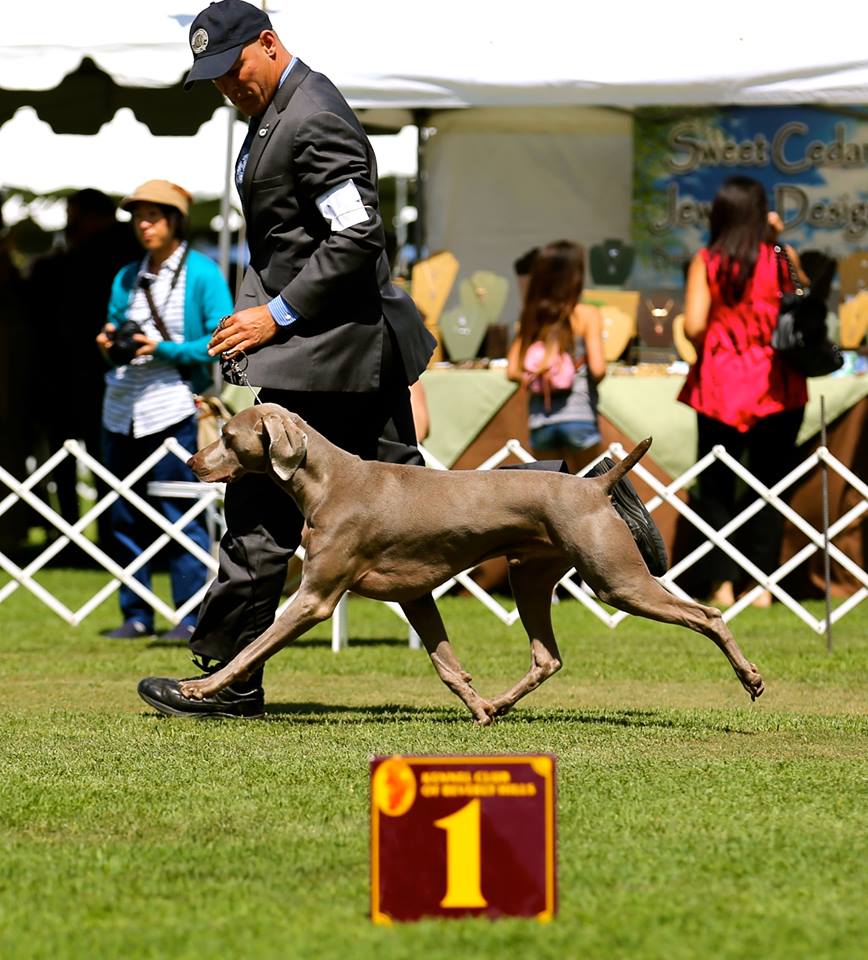 Boulder in the Sporting Group on June 24, 2016 at the Kennel Club of Beverly Hills Show in Long Beach, CA 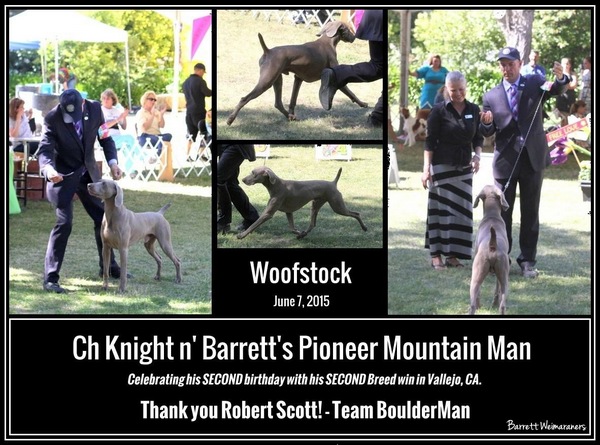 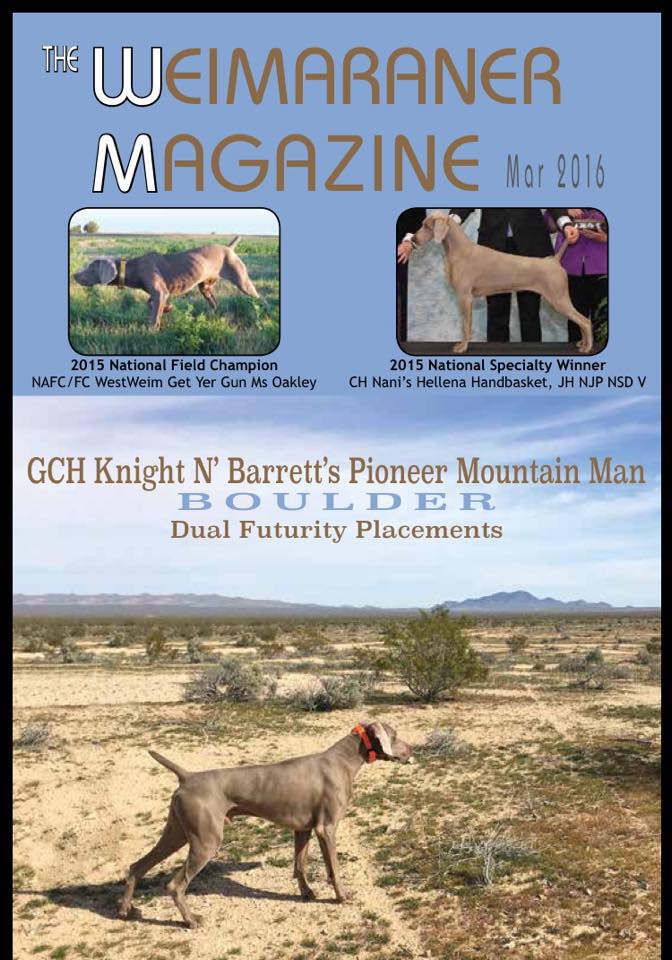 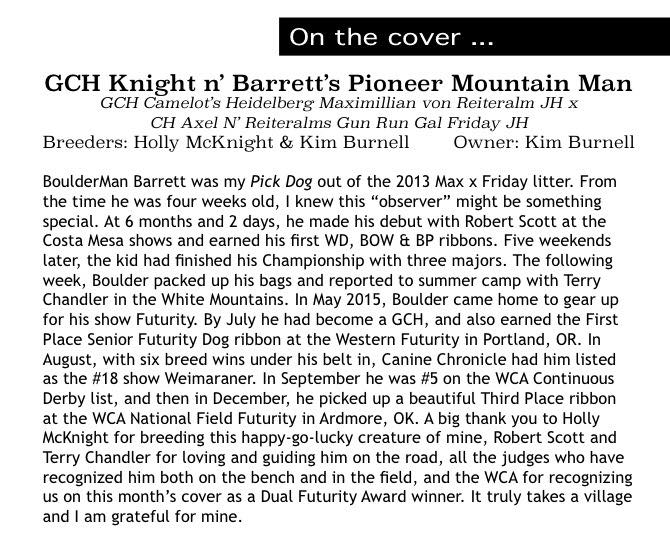 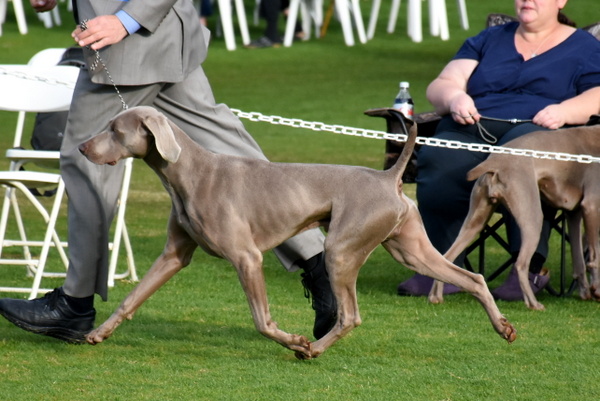 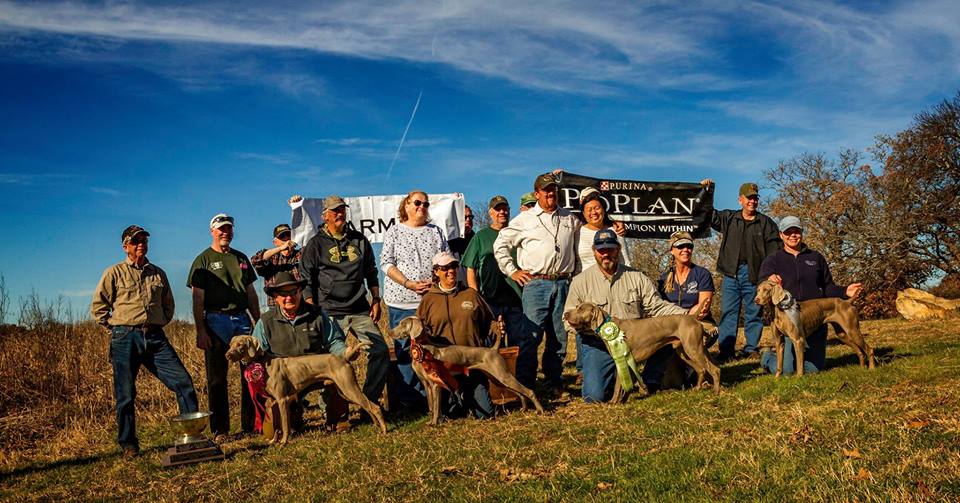 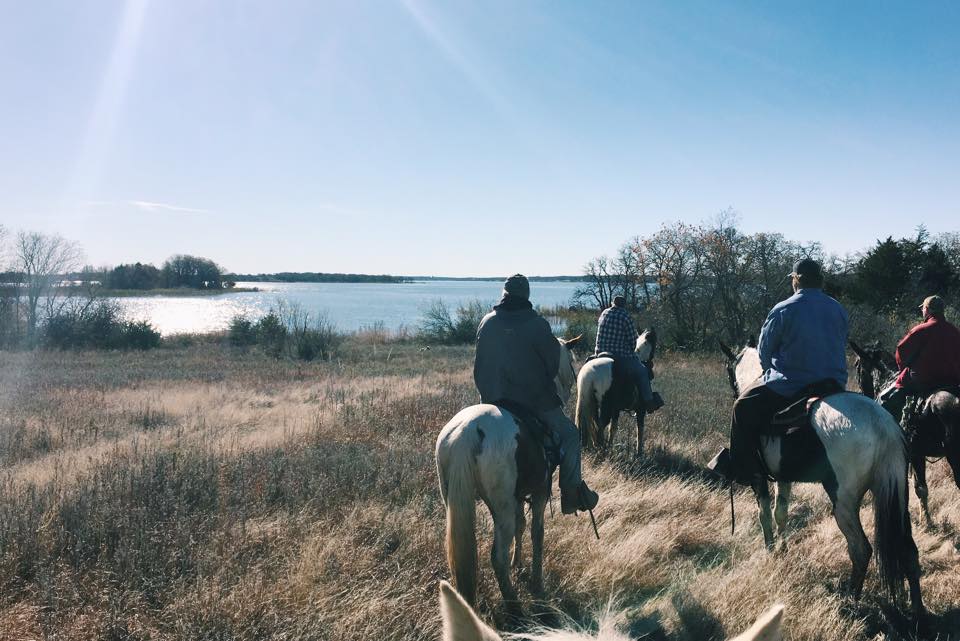 December 2015 – Boulder in his 2015 WCA National Futurity run. He’s the very, very small speck in the middle of the photograph. 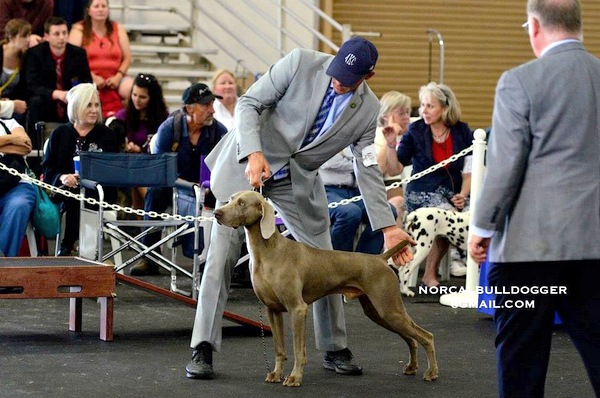 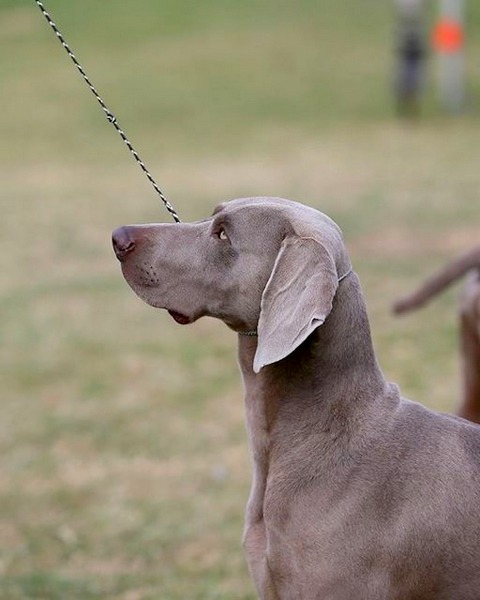 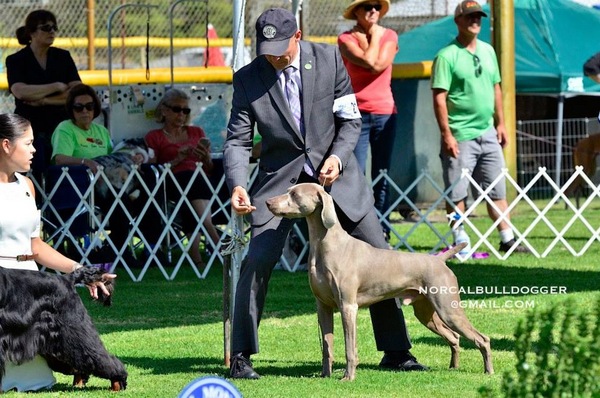 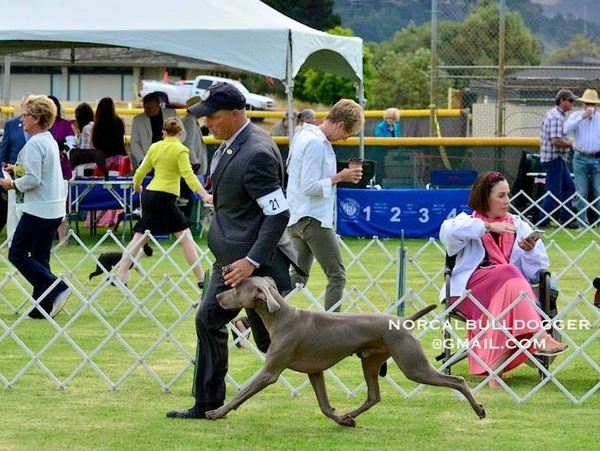 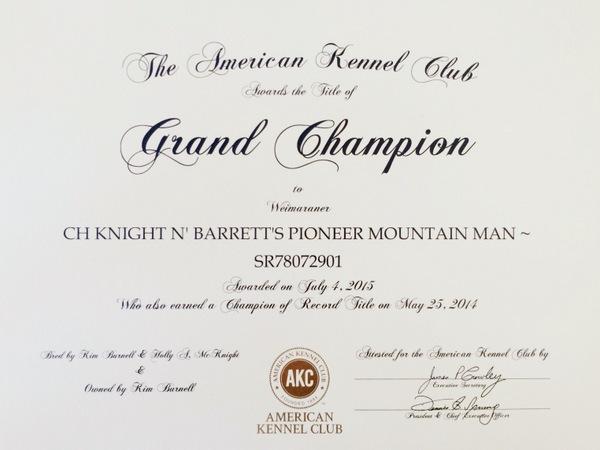 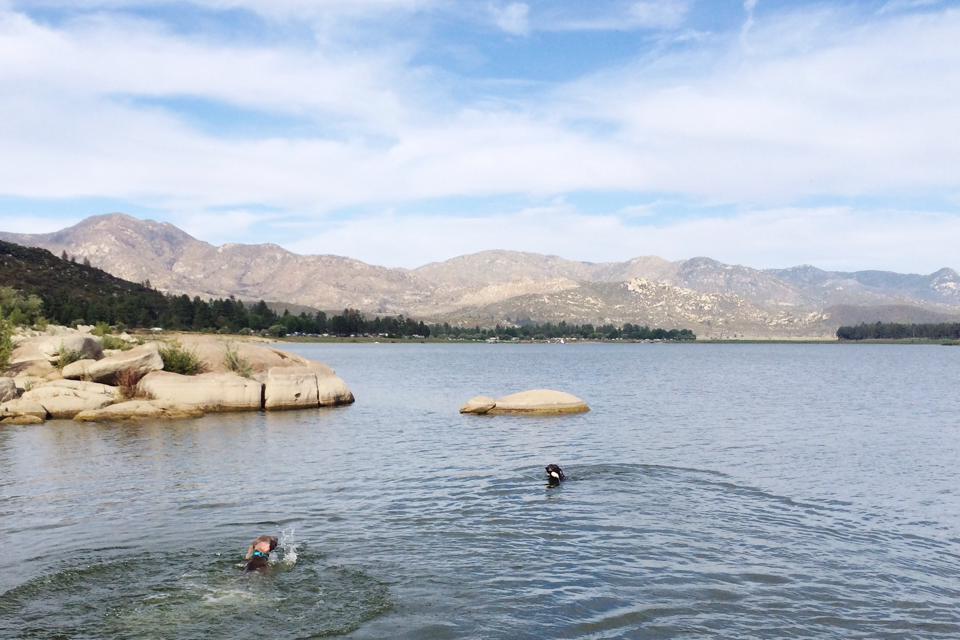 Swimming in Lake Hemet in August 2015. 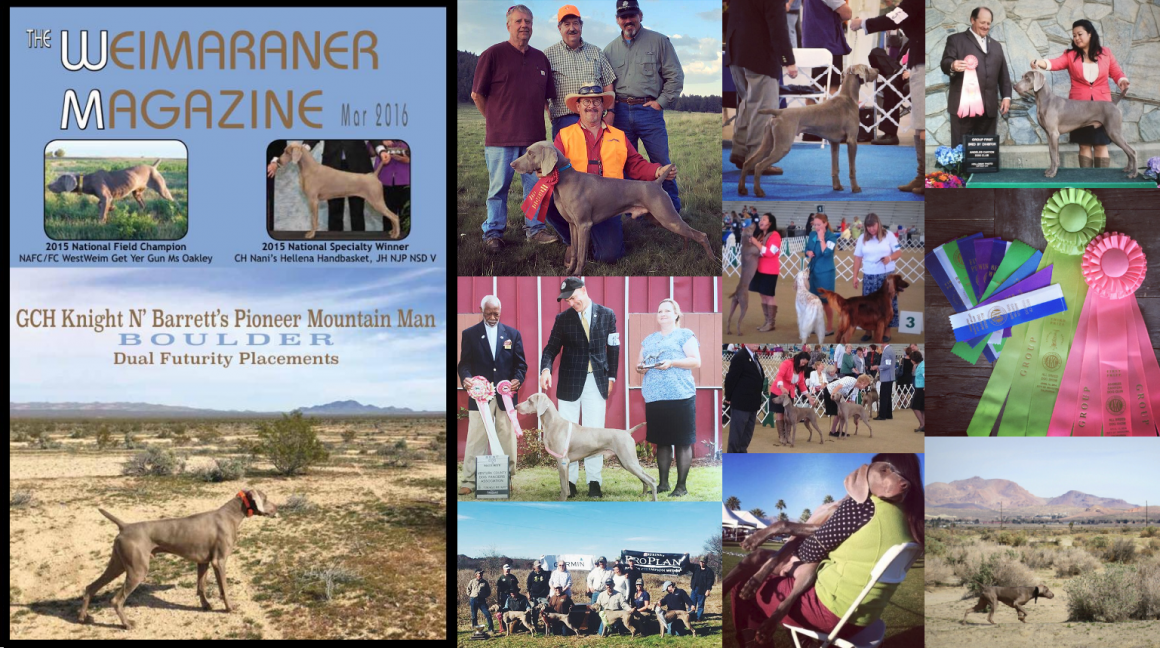