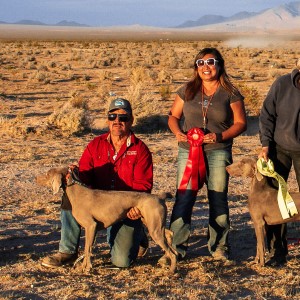 For the past SIX weeks, we’ve been holed up in the Mojave desert participating in what’s called a “field trial.” In short, it’s a performance event where pointing dogs, including Weimaraners, are provided with a competitive opportunity to hunt and find game.

Congratulations to the Sire and Dam Owners, Breeders, Owners, and Handlers of the dogs who placed in the combined SWC and WCA Western Classic field trials!

The Barrett Collective participants in this 2020 Autumn season included:

To the owners of these great dogs, THANK YOU for giving them a chance to do what they were bred to do. And congratulations to everyone who had success with their dog(s).

To anyone who wishes to check out what this field trial thing is all about, join us in January!!! The next season starts on the 9th.

Now, back to our regular programming…