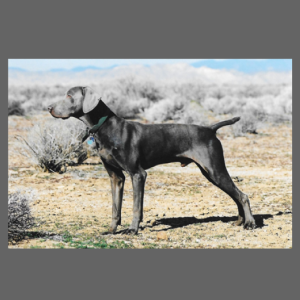 Scooby was one of the few true all age Weimaraners, bursting on to the field trial scene in 2000. His journey began in the early spring and finished with a bang at the Nationals in Ardmore.  At 15 months of age he won the Futurity and the Derby at the WCA Western Classic in Washington State.  A few weeks later in New Jersey, he won his second Field Futurity.  Over the summer he worked on steadying.  He started the fall season with a 4 point All Age win.  A week or so later, he won his third Futurity at the WCA Mid-America Field Classic in Ohio. No Weimaraner had won all four Futurities. Owner Chuck Cooper set his sights on that goal.

Scooby’s All Age win qualified him for the 2000 National Championship.  He was entered in the Championship as a warm up for the Futurity.  The idea was to get him on the grounds.  If he started looking tired during the open, the plan was to pick him up to save him for the Futurity. He didn’t look tired.  He ran a powerful race with one find and a big finish.  At the tender age of 25 1/2 months Scooby became a National Field Champion!!!  The next day he also won the National Futurity.

Scooby’s career did not end in 2000.  His field trial wins over the span of his career also included the National Amateur Field Championship in 2003 with his friend Jack Potter at the helm. He won the WCA Western All Age and Open Gun Dog, the WCA MAC Open All Age (multiple times), the WCA Eastern Open All Age, and the Western Chukar Shooting Dog Classic, an American Field event. In all Scooby had 8 one-hour championship and regional wins. In all breed stakes he had many wins and placements leading the way for Weimaraners to be taken seriously in all-breed competition across the Country.

Scooby was bred only five times.  He was a national caliber dog that has produced national caliber dogs. Breedings with the Erbenhof line especially clicked.  Two such breedings resulted in three WCA NFC’s in 2009, 2010 and 2014 and one NWA, American Field, National Champion. At the 2008 Nationals all four futurity placements were sired by Scooby. His get were regularly in the winner’s circle at the Classics.  One of his sons won the OAA, OGD and AGD at the same Eastern Classic.  He has four FC’s and two AFC’s.

Now his grandkids carry the torch. They are winning on all levels. Three, so far, are National Champions. One granddaughter is changing the way that people look at field trial Weimaraners. She is a NFC/NAFC/GFC, the first in our breed and a 2X NWA NC, the highest placing Weimaraner in the history of the AKC National Gun Dog Championship (which she placed in twice) and a regular winner in all breed all age stakes.   His legacy lives on…