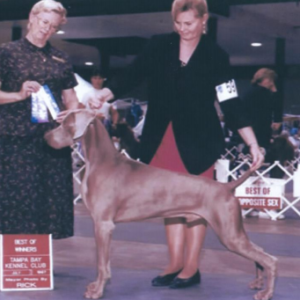 Logan’s parents, Monroe and Allie, are two dogs easily recognized by their call names. With a powerhouse pedigree behind him, Logan hit the floor running and did not stop! He was the only male puppy in his litter and Tom and Kelly knew that they had something special from the start. Logan finished quickly and had a short career as a special but it was soon realized that his most important contribution would be made as a stud dog.

Logan passed along the attributes of his formidable pedigree and has produced 64 champions landing him the #8 position of Top Producing Sires in our breed. He has produced 12 Futurity/Maturity winners including Ch.
SmokyCity True Grit, Ch. SmokyCity Mob Boss, JH (sire of Ch. Camelot’s Go For The Gold) and Multiple All Breed and WCA National Specialty winning Best in Show Ch. SmokyCity Hail Mary. He has also made his contribution in the field producing Top Ten Derby Field Trial dogs and many dogs with versatility titles.

Logan’s greatest fans are his owners, Kelly and Steve Photopoulos and their children, Nick and Katie. Logan came along at a difficult time in Kelly’s life and brought many laughs and joy to their family. With a toy in his mouth (to stop the barking for your undivided attention) he was a loyal friend and protector. He knew when to be gentle with Nick and Katie, standing patiently while they pulled themselves up to stand by his collar and
would walk slowly at their sides while they learned to walk. His fabulous temperament and sound mind have been passed on to his get producing not only beautiful Weimaraners but wonderful dogs to live with.

LOGAN appears in the Barrett pedigree as a grand-sire to the 2021 Jonah x Josie puppies.