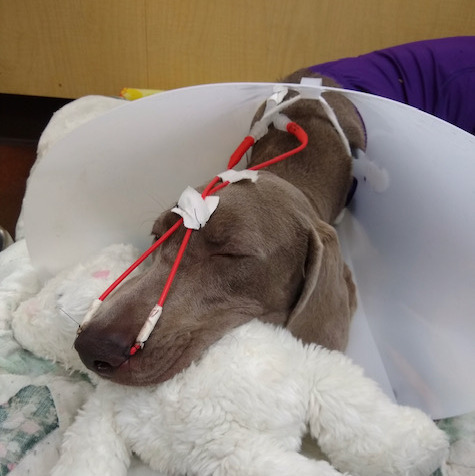 The below article was written by Stacy Yochum, owner of Barrett ‘n Base Camp’s Lady Josephine, “Josie” out of the 2018 Judd x LadyBug litter. Stacy makes a great case for WHY it might be beneficial to have health insurance. 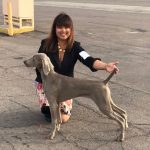 Tip from Kim: Even if you choose to cancel it later, having health insurance on your puppy for the first two years will give you GREAT peace of mind, as puppies get into a lot of things, and you’ll find yourself at the vet more often than you think you will. #askmehowiknow

Pet insurance. What is it? Do I need it? If so, why? As you plan to bring home your new puppy, you of course, will buy many things to make his or her homecoming a smooth transitional experience for all. What many people don’t consider purchasing is pet insurance. Many people won’t ever need or use pet insurance but when you do need it, you may REALLY need it! I’ll explain. 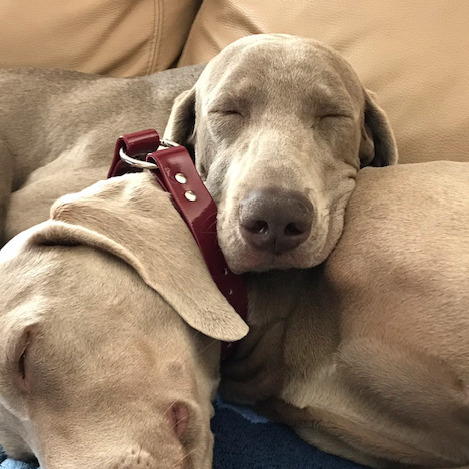 About two and a half years ago, my husband and I brought home our first Weimaraner. Harper was just “perfect” or so we thought, at the time. She was seven weeks old and we loved her more than anything! I am somewhat of a detail oriented person so I had actually researched all the major Pet Insurance brands very thoroughly before even bringing her home and knew I wanted that for Harper. I decided, at that time, on Nationwide’s Whole Pet With Wellness plan. It was a plan that had a yearly $250 deductible and with everything after that amount at a 90% reimbursement rate INCLUDING wellness. This meant that even the vaccinations, teeth cleanings, supplements, and spaying were covered in addition to any illness. I loved this plan, at that time. Fast forward to when Harper was about four months old. One evening, she wouldn’t eat, wouldn’t play, and seemed to be warm to the touch. We, of course, were worried. The next day, we saw our regular vet who in turn sent us to the emergency veterinary hospital where Harper would remain for 5 days. Her fever had risen to 106 and we were told “she probably wouldn’t make it.” We were DEVASTATED! Our perfect puppy had Hypertrophic Osteodystrophy or HOD. She eventually pulled through but experienced setbacks until she quit growing, until her growth plates closed. Our hospital bill was over $7,000. We were reimbursed about $6,400. Nationwide usually paid us within 10 days of claim submission. We were thrilled. They covered all other illnesses and all well checks, spaying, and vaccines at 90%. The first year for a puppy can be very expensive even if they don’t get sick. Because of this, when we were ready to bring our second Weimaraner puppy home in November of 2018, the first people I called were Nationwide. I was shocked to hear that the Whole Pet With Wellness plan was no longer available for puppies under one year of age.

Harper was “grandfathered in” to her plan but our new puppy wasn’t eligible. Also, Nationwide had added caps to all illnesses in their Major Medical plan. I looked up HOD, specifically, and if our new puppy, Josie, were to have the same issues as Harper, HOD, we would only be reimbursed about $450 because of the maximum payouts or caps Nationwide now had. That was unacceptable so I began to do research.

I was determined to find something better. I, once again, compared all of the major brands of pet insurance. This time, I determined Healthy Paws to be our best option. They do not cover wellness but there were NO CAPS on any illness or accident. One important thing to note is that all companies DO require puppies to be at least 8 weeks of age before they can be enrolled in any plan. There is also a 15 day waiting period after initial enrollment before the policy is actually in effect. As soon as Josie was eight weeks old, I called Healthy Paws and enrolled her “knowing” I’d never actually use it because we couldn’t have bad luck twice, right? 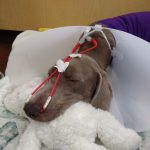 Now fast forward to Josie at six moths of age. One evening, she threw up but seemed fine. We were not concerned at all. We knew puppies put things in their mouths all the time and sometimes even ate them, just like toddlers. Thirty-six hours later, Josie was in the emergency ICU, struggling to breathe. We thought at first she’d been poisoned somehow. The vets soon informed us that Josie was suffering from Aspiration Pneumonia. She was put into an oxygen tank and tubes were inserted into her chest to drain the fluid. She was on 4 different intravenous antibiotics. She was stabilized but was not showing improvement per se. 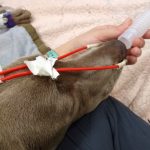 Long story, short, Josie was hospitalized for 12 days and ended up having to have half of her lung completely removed. This was a major surgery as they actually sawed through her sternum so that they could remove the cranial lobe of her left lung. We NEVER imagined that this could happen to our perfectly healthy and happy Weim puppy. We were, once again, devastated thinking that this was some nightmare from which we would soon awake. We didn’t. It was real. Josie is okay today. It’s been almost three weeks since her surgery and she is healing well. We brought Josie home from the hospital on April 14th. Our total bill was a whopping $18,859. 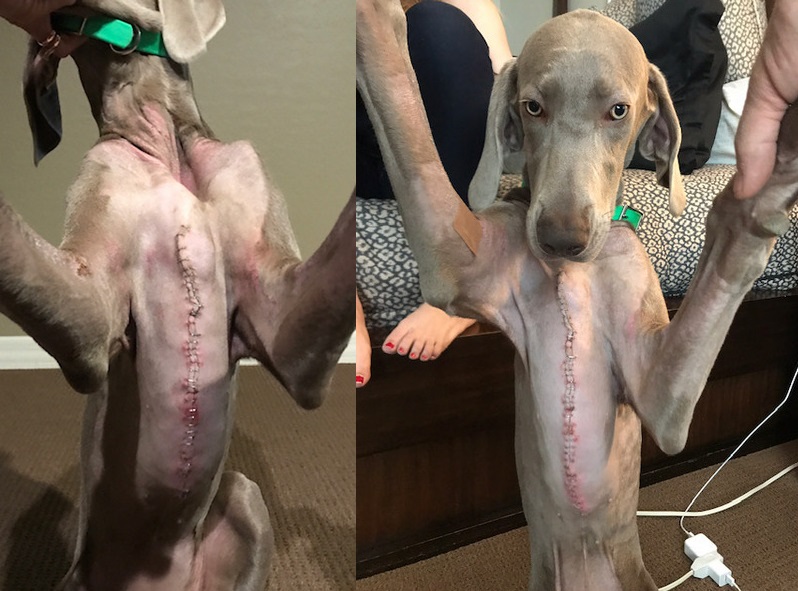 There are still more x-rays and ultrasounds needed in future appointments to check lung function so we know that number will grow. I submitted our claim to Healthy Paws the very same day that we brought Josie home from the hospital. Another thing to note is that by utilizing their Healthy Paws app, the claim submission process is seamless and EXTREMELY easy. I instantly received an email confirming receipt of my claim with a promise of payment within 7 to 10 business days. We received payment on April 23rd. It was direct deposited right into our account. Our reimbursement amount was $16,748.10. 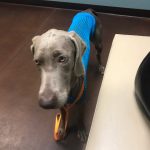 We had chosen a $250 deductible, similar, to Harper’s plan, with a 90% rate of reimbursement. This is another thing I LOVE about Healthy Paws: you choose your deductible, $100, $250, or $500 and you choose your reimbursement percentage, 70%, 80%, or 90%. There are many combinations customizable to your budget. My cost for Josie in our zip code (yes, it matters where you live) with a $250 deductible and the 90% reimbursement was $55 per month…chump change when you think about it! If you wanted to significantly lower the monthly rate, you could choose a $500 deductible with only 70% reimbursement and the cost for Josie would have been around $31 per month. I’m very glad we chose the one we did. I couldn’t be happier with Healthy Paws. They continue to check on Josie and genuinely seem to care. The last important thing to note is that things do constantly change so make sure you are always checking on new rules and additions (or subtractions) to your current plan. This will ensure you are always covered to the best extent possible. You wouldn’t want any surprises.

Two for two, in our case, so YES, you NEED pet insurance!

Unfortunately, Healthy Paws did away with the 90% reimbursement for Weims in AZ. You’d have to get a quote with your zip code to see if it’s still offered in your area. It still is in some. They also customize your plan with 3 deductible choices$100, $250, or $500 and 70%, 80%, or 90% reimbursement levels. You can change your plan to go down but not up. That means for example if I’m at 80% reimbursement, I can change to 70% but can never go up to 90%.

I also like Trupanion because you can get some coverage for breeding if needed. They are the most expensive though, I’ve found. Again, zip code matters. Each company will ask you for it in order to give you a quote.

Those three, Nationwide, Healthy Paws, and Trupanion are the pet insurance companies I would call if it were me. Hope that helps. 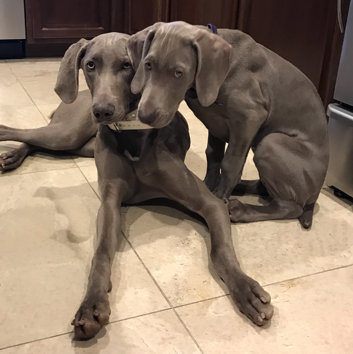 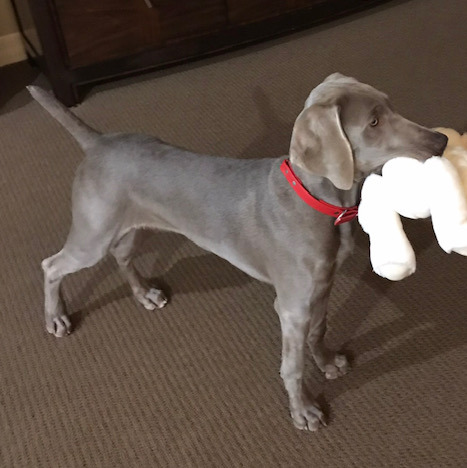 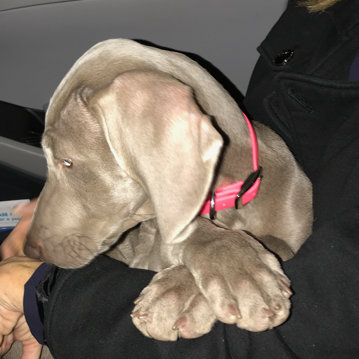