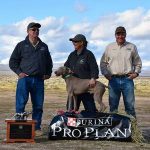 Turbo was Yellow Boy out of the 2015 Project Mika Autobot litter. It was clear from the get-go that this boy was special. In October, he left the nest to stay with Erin and Bug up in the mountains. In December, he traveled over 2,500 miles (with littermate sister Luna) to see his biological dad (2xNFC/FC ERBENHOF SnS BOOGIE WOOGIE BO) compete in Ardmore, OK at the 2015 WCA NAtional Field Trial. In April 2016, he earned a Prize III in the NAVHDA Natural Ability test with Garret. Turbo is a two-time NWA Open Derby winner, and is also Winner of the 2016 WCA Western Field Futurity. Turbo is being exclusively trained and handled by Diane Vater of Alpha Dog Kennels in PA.  Turbo’s pedigree can be viewed here.