If you own a puppy from a breeder who is a member of the Weimaraner Club of America (WCA), and that breeder also does a fair amount of competing with Weimaraners, chances are pretty good that you’ve heard the term “Futurity” being passed around.

So what the heck is a “Futurity?”

The Futurity and Maturity Program is something the WCA came up with over 60 years ago. It’s kind of like a “Breeders Cup” because it’s primary purpose is to reward good breeding. Owners also get recognition because it’s understood that Weimaraners who win the Futurity and Maturity only do so because their owners are part of their dog’s success, too.

It’s a big deal for breeders to have dogs that win the Futurity and Maturity because it’s a stamp of approval from the WCA that our breeding programs conform with the AKC-approved breed standard and it’s intent.

The Futurity recognizes dogs that appear to have great potential for our breed’s future. The age window for a dog to participate in his/her Futurity is around 8 months to 16 months. The Maturity recognizes those same dogs one year later to acknowledge how nicely they’ve matured as adult dogs.

What’s in it for the breeder?!

If nothing else, breeders have in common the fact that we’re COMPETITIVE. We’re always looking for the next win, the next brag, the next accolade. It’s affirmation that we’re doing the right thing by our dogs, and our breed.

When we’re planning a litter, we ask ourselves, “are puppies out of this litter going to be competitive in their Futurity and/or Maturity?” If the answer is yes, we have within thirty days of when the litter is whelped to fork over some cold hard cash to the WCA Futurity Administrator. (This is also called the “forfeit,” because the breeder is “forfeitting” money to the cause.) Then we wait for the puppies to be old enough to compete in their Futurities and Maturities, and we beg the owners to enter them. 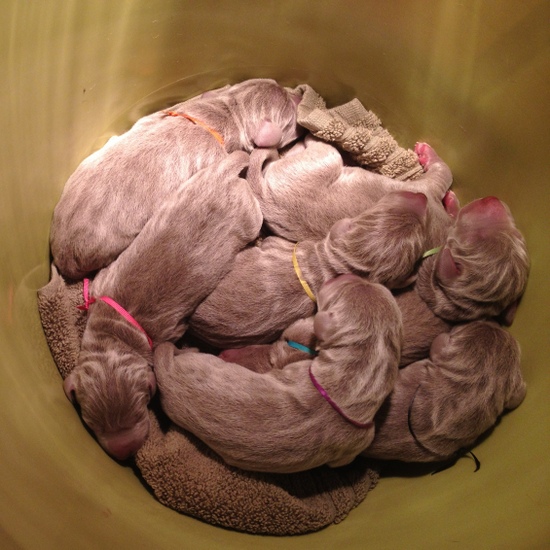 This was Friday’s first litter in 2013; Boulder is the Black Collar Boy. By the time this photo was taken, the Futurity Forfeits had already been paid.

In a win, two Pewter Weimaraner trophies are awarded. One goes to the owner of the dam of the winner (which is also the breeder), and the other goes to the owner of the sire of the winner. They are beautiful, hard to come by, and when we earn them, we tuck them under our pillows at night for the first thirty days and polish them weekly!!! Mine are displayed in my office at home. Oh, and there’s also a $100 check from the WCA Futurity Administrator that appears in the mailbox a few months after the win.

Bug with her Futurity ribbon in 2016. The big box is the traveling trophy. Next to it, you can see the Pewter Weimaraner that I earned for owning Bug’s mom, Friday. Bug herself earned the plaque, which is kept by her mamma, Erin. Note: Erin missed being in this photo because she still in-flight on her way to the trial grounds. We need to photo-shop her in. 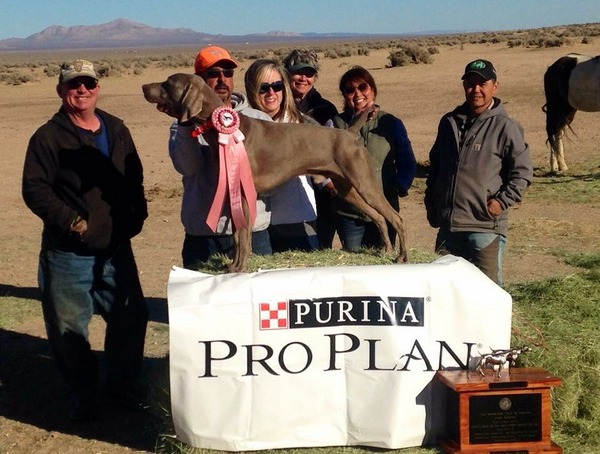 And here’s Charles and Kristi Salse with their boy, Baja.

This is Boulder’s Show Maturity win photo from June 2016 with his handler, Robert Scott. 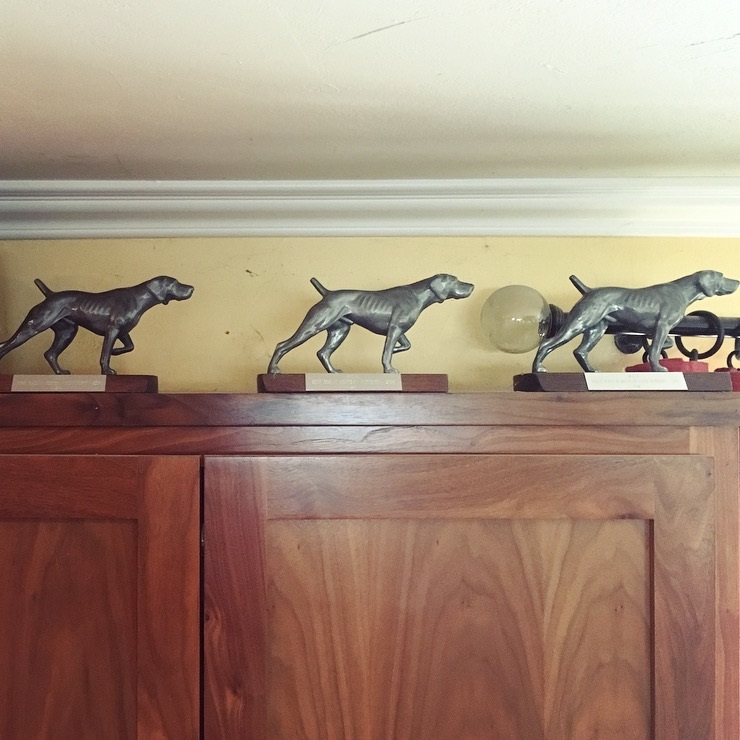 What’s in it for the owner?!

Congratulations on owning a dog your breeder thinks has the goods to be competitive in his/her Futurity and Maturity! In addition to bragging rights, the owner gets to keep the plaque that’s awarded to the dog. 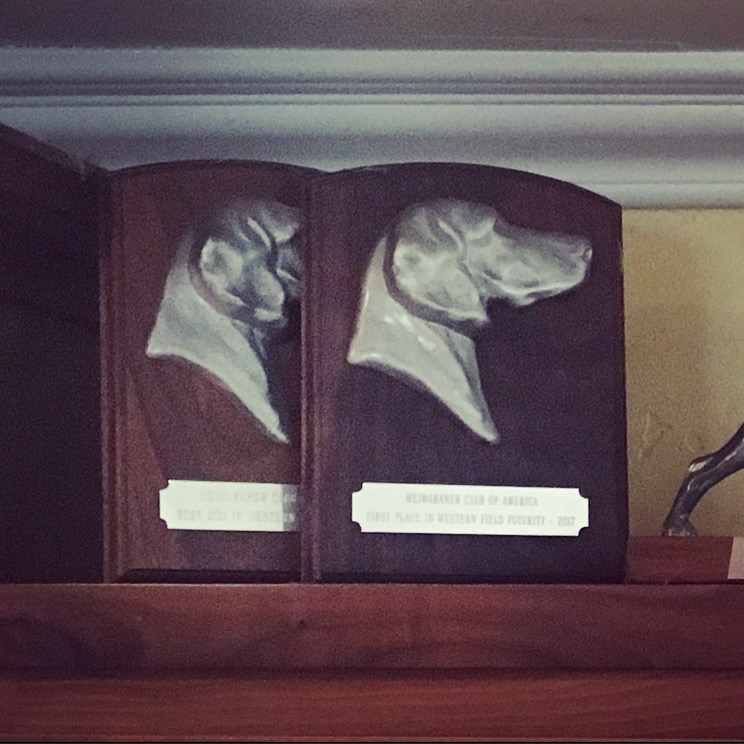 I treasure my two: one is for Turbo winning his Field Futurity, and the other is for Boulder winning his Show Maturity. 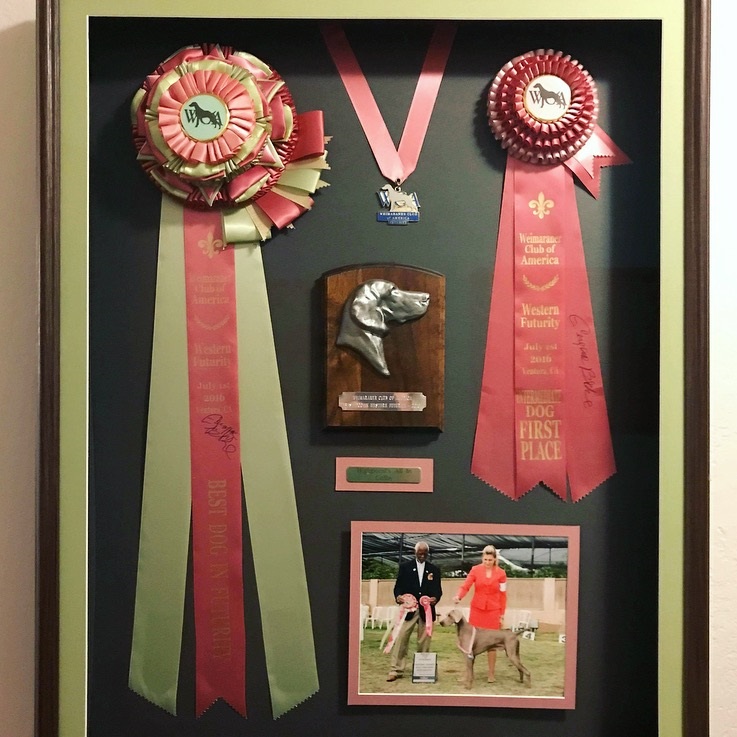 THANK YOU EMILY (friend of the Barrett family) for letting me use your photo of Colby’s Futurity loot for purposes of illustrating what the owner gets! To clarify, in addition to the plaque, there’s also a beautiful rosette, medallion, and (optional) win photo. One day, when I finally have enough time to get organized, I’ll do something like this to showcase all of my Futurity and Maturity dogs.

Now that you’ve got the primer on what this is all about, feel free to read the official WCA Futurity and Maturity Handbook, which explains the whole thing in 16 pages of additional reading.

To date, 20 Barrett Collective dogs have placed or won their Futurity or Maturity. You can see a current list of them here.

The following Barrett dogs and their descendants are eligible to compete:

WOW. That’s a lot of Barrett Collective dogs!!! Should you choose to have your dog participate in his/her Futurity, BEST WISHES AND GOOD LUCK!!!

P.S. When I have some more time, I’ll add a paragraph about the DUAL FUTURITY DOG. 🙂