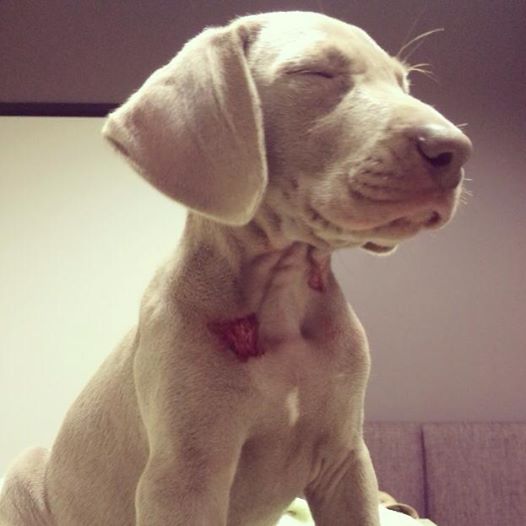 Let’s start this safety message by saying: EVERYONE IS OKAY.

I was just about to fall asleep when I heard the puppies whimpering in their crates. Sounded liked they wanted to get out to potty one more time, so I rolled out bed and obliged.

As usual, I opened up the patio doors and let the puppies out of their crates to potty. Mamma dog, Friday, was already in bed and didn’t get up to accompany them.

I had just walked back into the house and sat down to scroll through my iPhone (to pass the time while waiting for them to potty and come back into their crates) when I heard a puppy in EXTREME DISTRESS (howling at the top of it’s lungs). Immediately after this, a gaggle of puppies scampered into their crates and huddled together… not making a peep.

I followed the noise out to see what was going on with the screaming puppy.

I found him sitting out by the side gate, in a puddle of blood, screaming at me with everything he’s got. Eyes completely dilated. Ready to lunge at me if I came any closer. It was dark and he probably thought I was his attacker.

I ran into the bedroom and asked my husband to help me check out this puppy. Despite the flu he’d been fighting, he could tell it was urgent and hopped right out of bed.

Once we got the puppy into the house and on top of the kitchen counter, we investigated him and discovered a few puncture wounds. Two under the chin, about two and a half inches apart, and two more behind the head, also a couple inches apart. I started a bath in the sink, thinking that all I needed to do was give him a bath, dry him off, and put him back to sleep with the others.

After going through a couple of towels, we realized he was still bleeding; the wounds were pretty deep.

This wasn’t just some scratch in a bush, or a scrape against the fence.

By now I’m thinking he was bit by a raccoon or a ‘possum. Both critters are regular visitors in this part of town.

I got my shoes on, wrapped him in a blanket, and we drove to the emergency vet.

The first sentence that came out of his mouth:

THIS IS ABSOLUETLY THE WORK OF A COYOTE.

So of course, now I’m thinking, what if the coyote has rabies? The puppy is seven weeks old… he hasn’t had his first vaccines. (Not that that matters… in the State of California, he can’t be vaccinated for rabies until he’s four months old, anyway.) And I haven’t bred enough to know when maternal antibodies wear off in my bloodline…

The consequence of rabies is 100% mortality.

So for the next ten days, he won’t be able to go home. No socializing with mom or litter mates. Complete isolation from animals who have not been vaccinated for rabies. If he’s infected, he’s not going to make it. But if he’s quarantined, he at least he won’t infect the others.

Thankfully, the puppy cleared the x-ray with flying colors. No damage to his rib cage, and no fluids where there shouldn’t be.

Regardless, I elected to keep him there overnight for observation, because his breathing sounded funny, and we wanted to make sure he wouldn’t swell up too much.

The following morning, I invested the area of incident.

A pool of blood started right outside the patio door. (Within three feet of the doorknob.) I assume this is where the puppy was initially attacked. Then nothing for about fifteen feet (assuming this is where the puppy was carried). Blood drops continued alongside the house and made a right towards the side yard, stopping at the wrought iron gate. There, a second pool of blood (location of where I found the puppy).

It appears the coyote hopped into the yard from the next door neighbor’s driveway. Once in, he collected the puppy, and carried it off.

Instead of turning LEFT to scale the solid stucco wall to get back out, he turned RIGHT, and was consequently landlocked by the alley that dead-ended at the gate.

Somehow, the coyote managed to drop the puppy,and he was able to dash behind the trash bin where the coyote couldn’t reach him. His ferocious bark, howl, and scream likely sent the coyote packing.

It’s amazing how powerful the instinct for survival is. Even at seven weeks old.

Here are some lessons I learned. I’m sharing them as a reminder to be diligent about protecting your dogs:

While hanging out at the emergency vet’s office, I trolled through my iPhone to learn what I could about coyote attacks. Here’s a graphic video that shows just how quickly a small dog can be attacked by a coyote and carried off. This happened in Fountain Valley, a community about 20 minutes away from me.

Also, I don’t think the puppies needed to potty that night. I think they heard scuffling outside their window and were alarmed. Mea culpa for not realizing the difference.

And we hope you never have to learn this lesson first-hand.