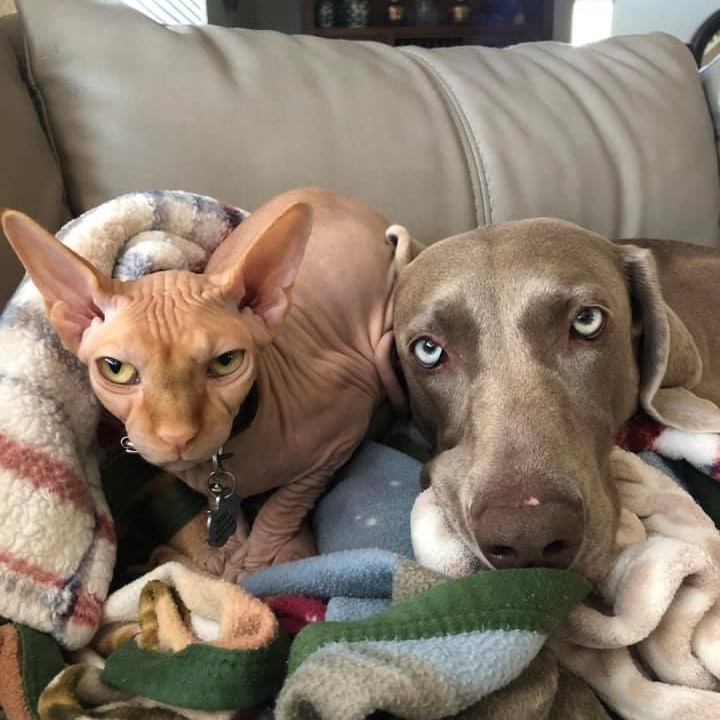 Thinking about getting a Weimaraner and wondering if they get along with cats? Hoping they co-exist in peace?

Weimaraners have been bred for generations and generations over many decades to be hunting dogs. While possible, it’s difficult for them to disregard their natural instinct to hunt “feather or fur.” In a fight or flight scenario, most cats will choose flight when encountered by a Weimaraner they don’t know and trust. In the same scenario, many Weimaraners will act before thinking, especially when they know they can outrun the cat.

In short, it’s possible. But there do’s and dont’s to follow:

Don’t ask for advice on Facebook. The average Joe will tell you that “cats and dogs get along great!” with no additional background information. Sad Sally will then chime in with a sad story about how her Weimaraner killed her (now) ex-boyfriend’s cat. So who do you believe? (The answer should be no one because you should take advice from people you don’t know.) Plus, we all know that Facebook is grease-trap for horrible advice. 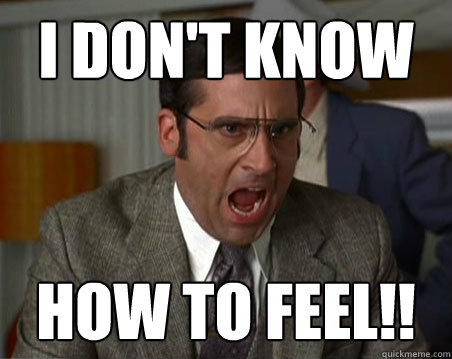 Don’t put too much stock into general internet articles. Most of them are too generic and broad; giving the prospective puppy owner no real advice or meaningful feedback.

Do query your prospective breeder. Just like people, Weimaraners vary in level of prey drive, tenacity, and willpower to hunt furry animals. Since these traits are genetic, an experienced breeder will be able to guide you towards the right puppy from the right litter to help you successfully integrate your new puppy into a home with cats.

Do decide what tolerance your cat(s) may have towards obnoxious, curious, and overly playful puppies. Cats also have difference tolerance and dog-savvy levels. Decide whether or not bringing home a Weimaraner puppy is fair to your already existing feline companion.

Do follow training and socialization protocol. Once you get your puppy home, your breeder should provide you with a detailed guide of how to properly introduce and socialize your puppy with the cat(s). This person should also be available anytime, for the life of your puppy, to answer questions about how to fix a situation that might not be going right.

Below are some experiences with current Barrett puppy owners and their cat(s). We’re sharing them here in hope you’ll find them useful! 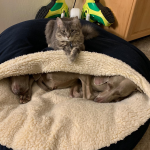 I have had cats and Weims since 1993. I have added adult dogs and puppies to the household without issue. We have a year old kitten and here’s how we did introductions. When the 10-week old kitten came home, he was in my son’s room with the door shut and an x-pen outside the door for the first week. The dogs could smell the kitten on us and knew he was there. Dogs would go in their crates and door shut when the kitten was out. Week 2 was door could be open, x-pen on the outside of the door when someone was in the bedroom with the kitten. Dogs could see the kitten and were overly interested. At this point the kitten was too small to climb the x-pen, but not for long. Week 3 we would hold the kitten and let the dogs sniff him. The girls were pushy and overexcited and I was a bit worried at this stage. Still rotating who was out – no contact. Week four, we’d let the kitten in the kitchen with one dog at a time on leash. Dogs were calming down a bit, but still twitchy. At this point, something clicked with the dogs and they figured out that the kitten was theirs and not a squirrel. The erratic kitten skittering really drove them crazy until he reached a certain size. We took our first road trip to the cabin and the dogs just accepted him. We NEVER left them together alone for the first 4 months. Either the kitten went in the bedroom or the dogs were crated. I think the most important thing for people to remember is that if something triggers the dogs, the cat will be the loser. But by then, the kitten was sleeping cuddled next to the dogs on the couch, attacking them and forcing them from their food bowls, so I knew they’d accepted him. He’s a year old now and bullies them and sleeps on them. Slow, secure and patient introductions are key. I do believe there are plenty of Weims who cannot live safely with a cat. – Mara W. 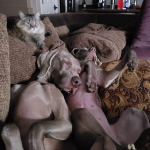 We had our cat for 5 years longer than the dogs but had a yellow lab previously and they got along great. Both dogs were puppies but the 2nd was about 7 months when we got her.  She tried to chase the cat a few times but never to do any harm, just to play. The cat needs a safe, high space to go to, he loves his cat tree. The cat will also swat at the dogs sometimes, but playfully. They co-exist very well. – Kelly F. 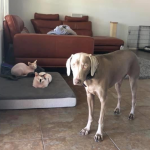 My cats have always had a pup around since they came to us as kittens. Stormi loves them and we’ve never ever had any issues! Only issue is sometimes storms is kicked off her bed or out of her kennel because she is a little push over 😂😂 – Bernedette Y. 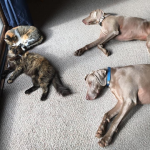 This is Anze (Barrett) and Kira (Trax) who have been around cats since we brought them home. It seems to work best it one of the species is either a puppy or kitten when brought into the family. – Debbie S. 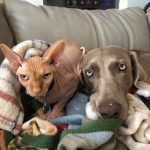 Kelibek has a strong prey drive but since she came to us as a pup, I truly believe the cats trainer her. Plus a couple swipes from those sharp claws helped. But I never let her play chase with the cats. – Jeanette A.