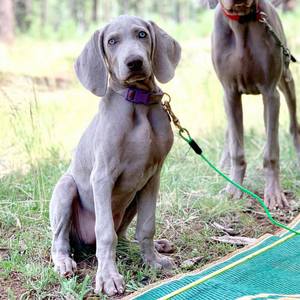 Also, drum roll please…. We’re delighted to formally announce the newest kid on the block: BASECAMP VON BARRETT REBEL DAUGHTER. Ms. Jyn Erso (2019 Swede x LadyBug Red Girl) is the product of a breeding that has been YEARS in the making.

Thank you Julie Aune of Luxe Weimaraners and Susan Thomas of Camelot Weimaraners for helping us make this happen. ❤️

JynniGirl, you’ve got some BIG shoes to fill.

Edited to add: Some of you know how much Elliephant meant to me in 2014. I’ve been waiting since then for someone to finish what she started. Jyn is her niece. 😊 HERE WE GO!!!!!!!