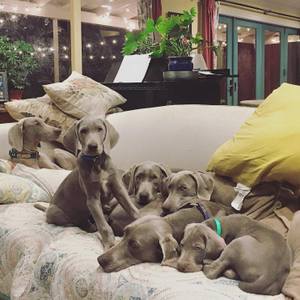 An update on Trailing Friday/Barrett Weims. And, sincerest GRATITUDE to all the owners, handlers, trainers, babysitters, dog walkers, emotional supporters, and the community who support us. And them. Cheers to more greatness in 2017!!! ❤️
————————
Dogs we’re on the hook for (10).

BRITTA (2009 Undocumented x Unverified). Seven years old. Queen of the house. Lives to boss around the others. She’ll always be the #1 bitch of this house.

FRIDAY (2008 Axel x Veba). Turning nine this year. (OMG!) Retired from everything but the sofa. Weasels her way onto my pillow every night. Doesn’t care for her grandkids.

BOULDER (2013 Max x Friday). Lives in Las Cruces, New Mexico with his BFF Terry. Having the time of his life. Postcards say “love you mom, but ain’t coming home.”

LUNA (2015 Bo x Mika). Currently with Uncle Warren getting ready for the Mesquite trial next weekend. Running in Derby. Also preparing for Field Futurity(ies) this year.

TENNESSEE (2016 Logan x Story – import from WA). Still hanging out with Garret and Blue in Laguna Beach. Can’t return until the head count at Barrett HQ comes down a bit. Or until we all move to Boulder, Utah, together. Whichever comes first.

SHILOH (2016 Rossi x Mika). Currently in Las Cruces, NM with Pappa Terry and litter-mate sister Sookie. Learning how to be a field dog.

PEBBLES (2016 Boulder x Seren). Spunky monkey. Has decided she doesn’t need us anymore. Currently interviewing for new mommies and daddies. Will be packing her bags and leaving us in a couple of weeks.

MACY/RORY/THEORY (2016 Boulder x Seren). Also known as Pebbles’ pretty sister. Quiet and demure. Can’t tell if she’s “a good one” or if the devil is still hiding. Ages into the shows next month. Need to take her to handling class.

PASCAL and STEVEN (2016 Imports). We’re still figuring out who these little boys are, what they’re about, and where they’ll end up. More about them, in the weeks and months to come.

Other Barrett kids with honorable mentions:

BUG (2014 Torque x Friday). Owned and loved by Erin. Won the 2015 Western WCA Field Futurity and placed in her Show Futurity. Working on her “cover photo” in this year’s Weim Magazine. Currently at home with Erin in Boston on Spring Break. Reports to Summer Camp July 1st.

ZANIE (2014 Torque x Friday). Owned and loved by Louise. Has a Derby ribbon, finished her GCH, placed in her Show Futurity and polishing up her field work with sister Squeek on weekends with Craig.

STARK (2014 Torque x Friday). Owned and loved by Carlos and Jana. Finished his CH quickly. Placed in Show Futurity. Has his JH. Now working on his SH. Just completed his first hunting season.

ELLIEPHANT (2014 Torque x Friday). Owned and loved by Mara and David. This past year, finished her CH, GCH, and placed in her Show Futurity. Now working on some more fun things, like agility!

JAEGER (2014 Torque x Friday). Owned and loved by Alex. The dynamic duo currently live in Tennessee where Jaeger gets to come along to work with his dad everyday.

RILEY (2016 Royce x Seren). Owned and loved by Ric and Christopher. Expertly handled by Rob to his Show CH in about 27 seconds. Seriously. Look out for him again when he grows up!

SOOKIE (2016 Rossi x Mika). Owned and loved by Jason and Sasha. Girl’s got serious potential. Currently honing her natural “skillz” with Uncle Terry in NM. Are you a betting person?! Put your money on this little rocket. NOW.

RONIN (2016 Rossi x Mika). Owned and loved by Brian and Trinity. Hit the show ring as a baby and nailed his first appearance!!! Packing his bags to travel down to the Western next month. Can’t wait to see what kind of potential he’s got.

BAJA (2016 Rossi x Mika). Owned and loved by Charles, Kristy, and Anthony. Kid has serious size, a great nose, and a good attitude. He’s learning a lot with Craig, and no doubt will grow up to be a successful huntin’ dawg. We’ll also see him at the upcoming Western.

LEIBNIZ (2016 Boulder x Seren). Owned and loved by Michael and Amy. Loves to terrorize his siblings. Maaaaaybe he’ll have a start in the field?!?! (Just for fun, because he can!) We’ll see when it warms up a bit and the snow thaws out.

BARKLEY (2016 Boulder x Seren). Owned and loved by Tom and Kelly. Adored member of his family. Waiting to age into the shows so the rest of us can see what he’s got!

COWBOY (2016 Boulder x Seren). Owned and loved by Holly and John. Kid can do it all. Eagerly waiting for him to grow into a handsome Prince and watch him conquer whatever’s in front of him.

Other kiddos who have “moved on” this past year: Seren, Mika, Cali, and Hammer. The girls have retired from their professional careers and Hammer is livin’ it up in style on acreage as a hunting buddy.

For those of you who are wondering about 2017 breeding plans… The official answer is “sometime in future” with Bug and/or Gracie. Timing unknown. Until then, we have our hands FULL growin’ out the young ones and letting the kiddos just… Be kiddos. 😊

Finally, here’s a snapshot of what our sofa typically looks like at night. With love, from our house to yours. – Kim and the gang 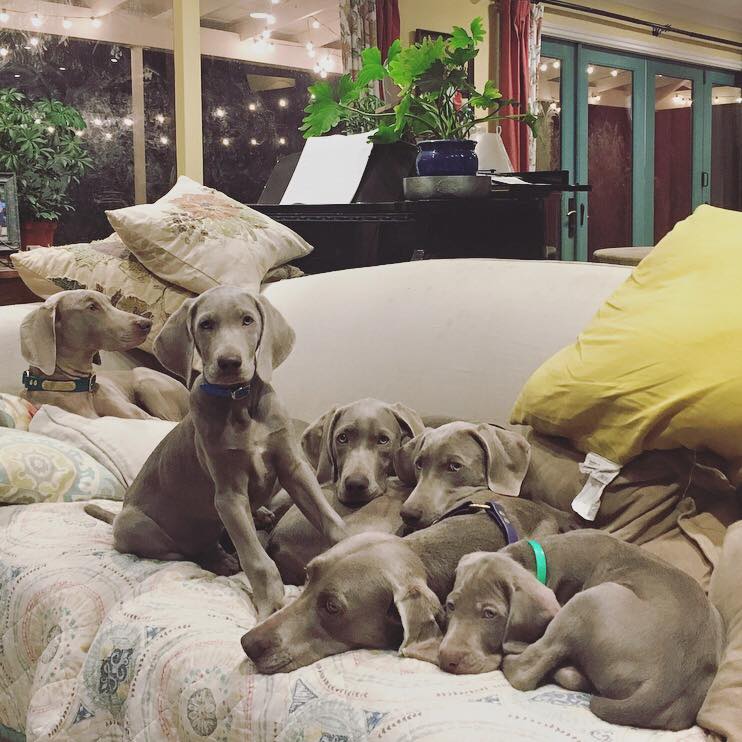