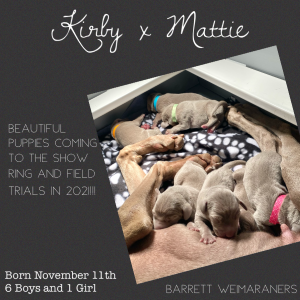 Barrett Weimaraners is pleased to announce the arrival of puppies out of CH Knight-N-Reiteralm’s Heartland Flyer, “Kirby,” and Smokey Topaz n’ Barrett’s Epic Matterhorn Adventure, “Mattie.” Six boys and one girl arrived on Veteran’s Day in Glendale, Arizona at the Feore Residence. All prospective owners have been notified. Mom and babies are doing great!!! No additional inquiries please, as all puppies are spoken for.

Note: On Thursday, December 3rd, I am departing for Oklahoma (Field Trial Nationals!!!), and won’t be back online again until mid-December. The next update will come when the puppies are about four weeks old. Photos will be uploaded here as they become available.

And now, some puppy photos: 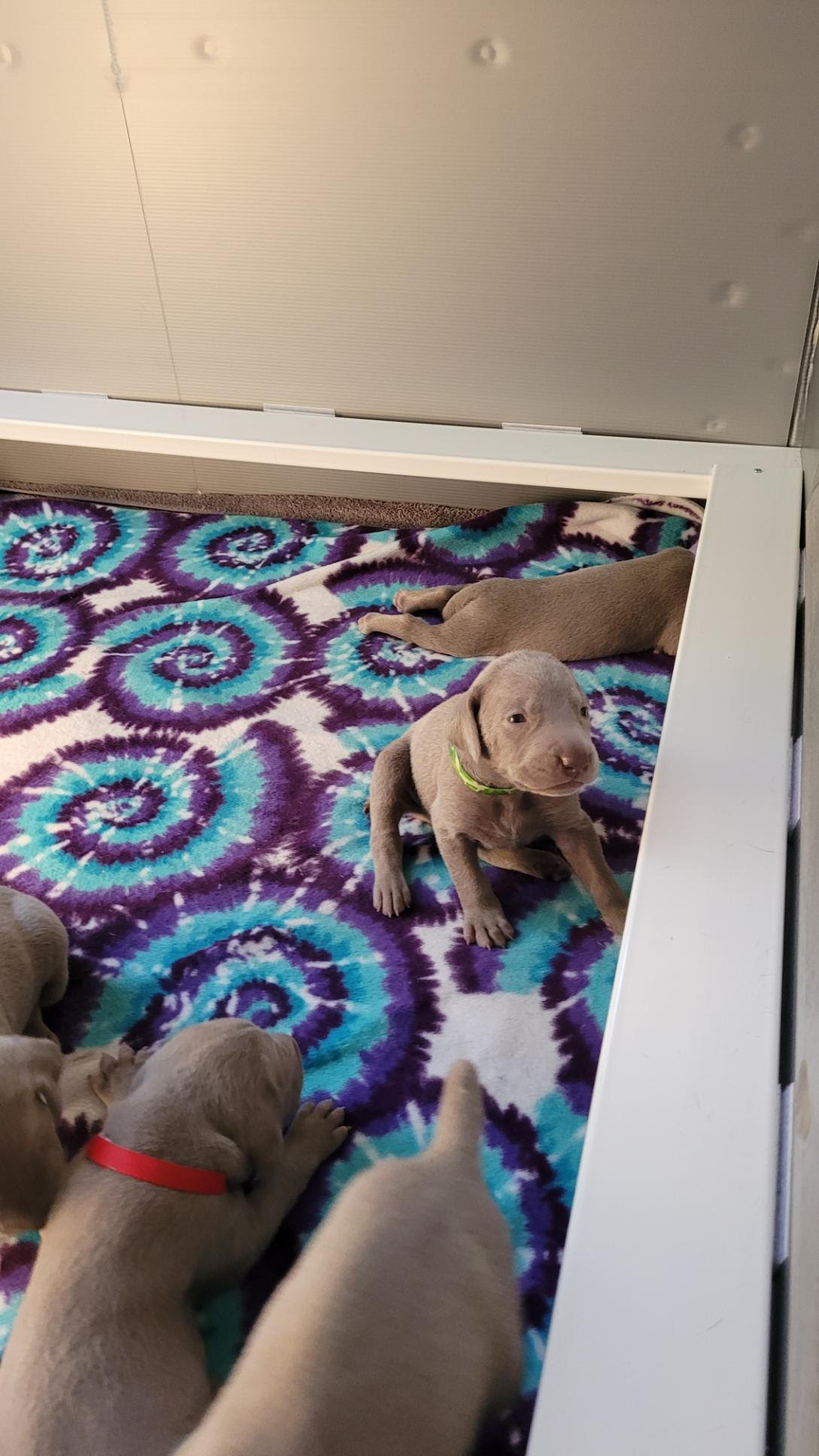 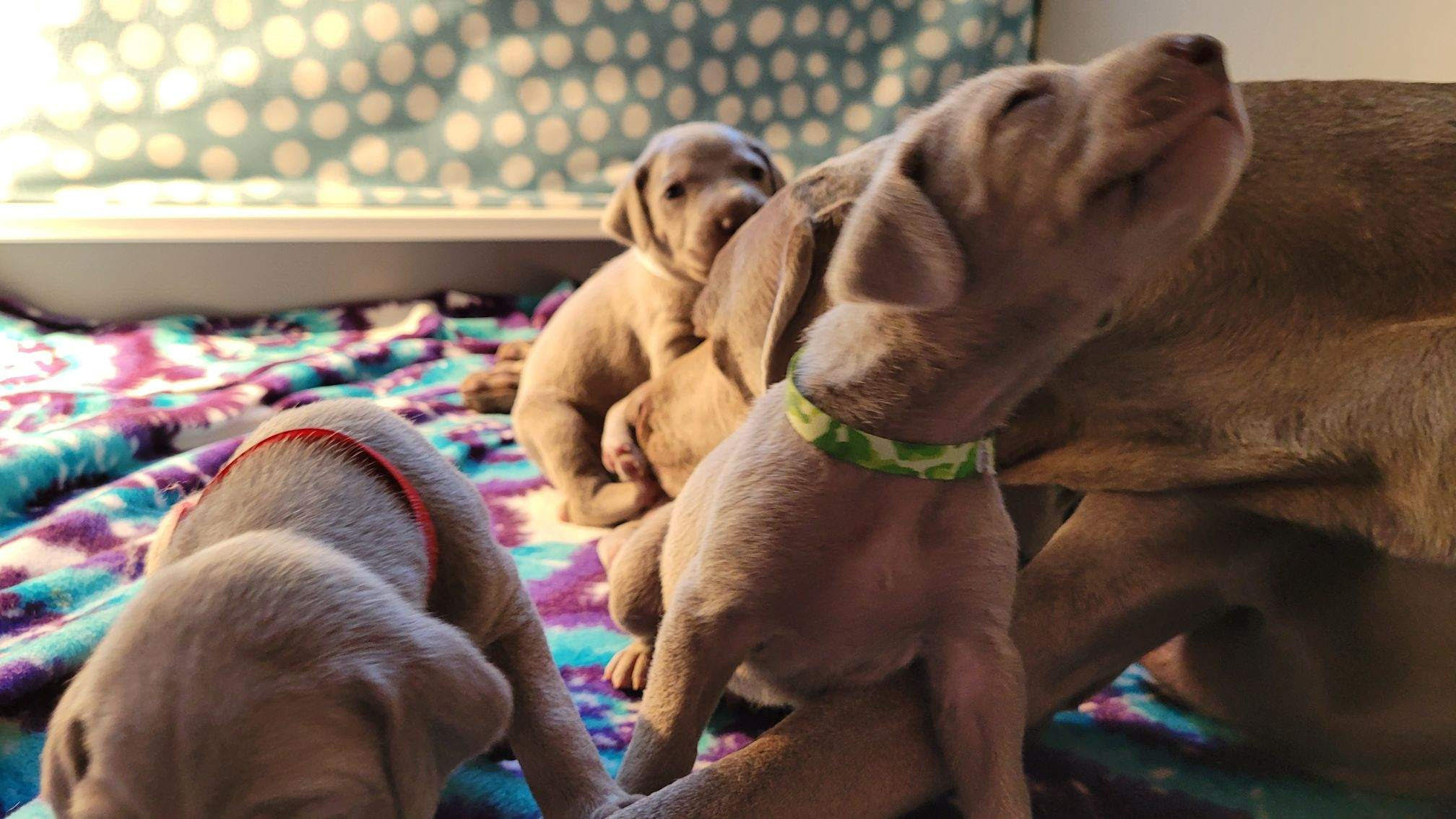 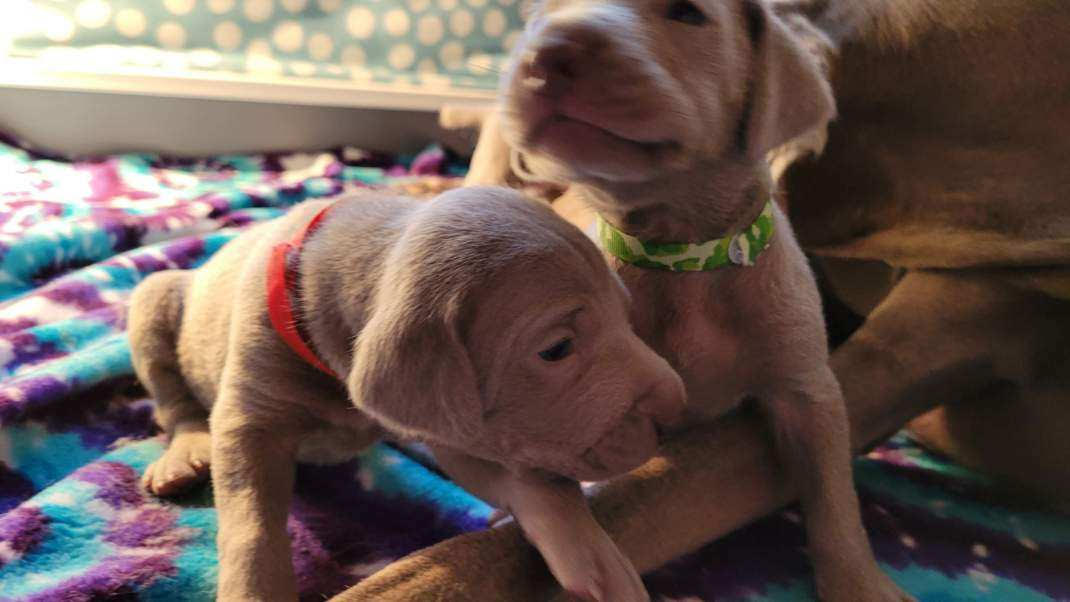 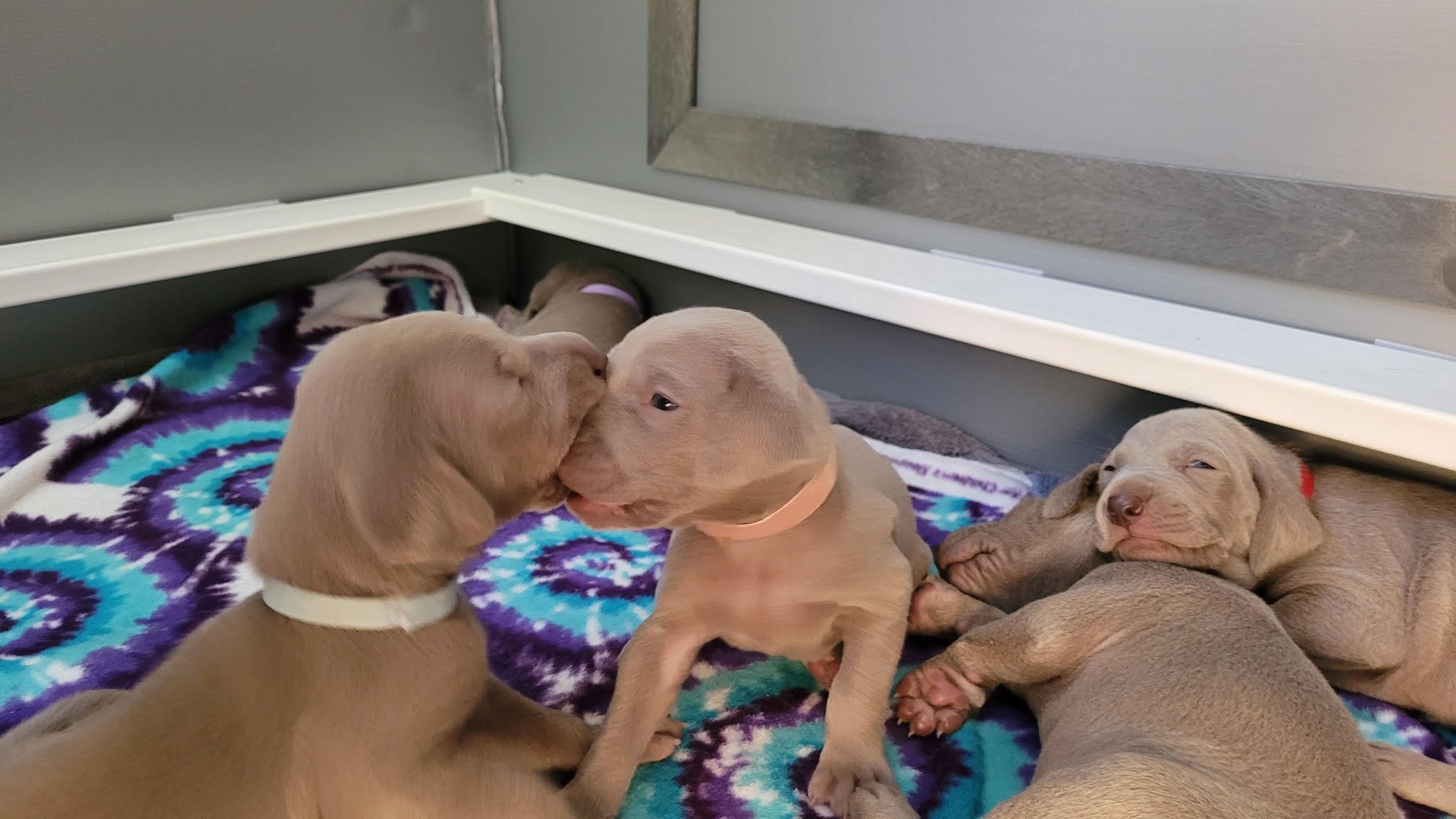 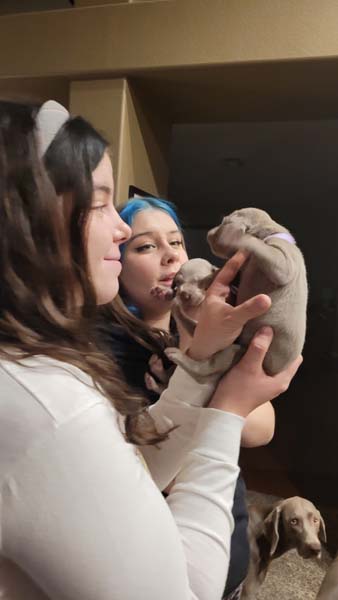 November 28th – A puppy with his human caretakers 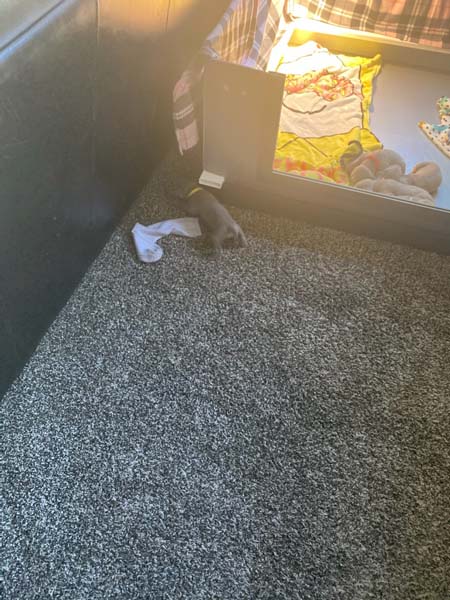 November 28th – Yellow Boy is the first one to get out of the whelping box. #nowtherealfunbegins 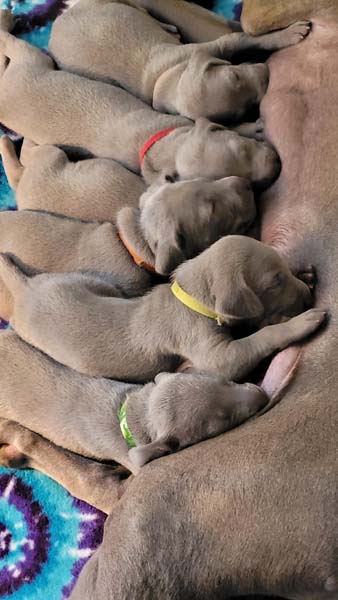 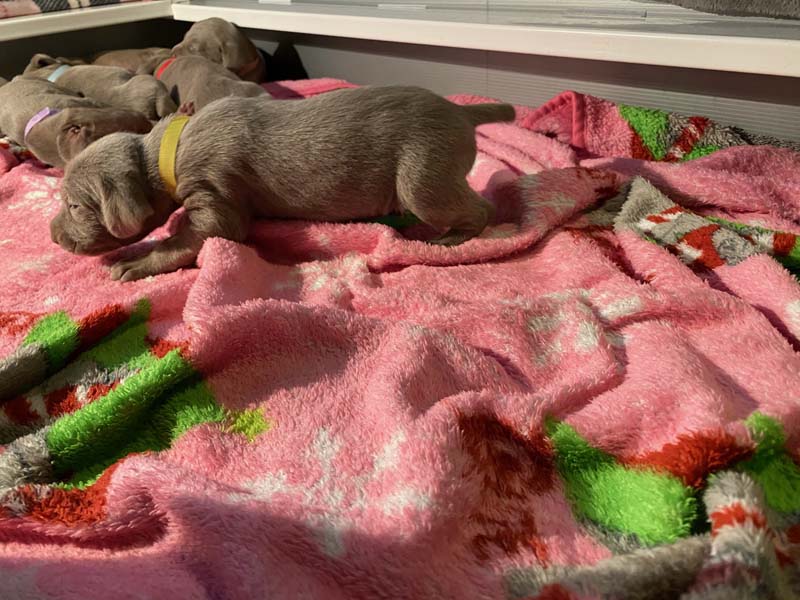 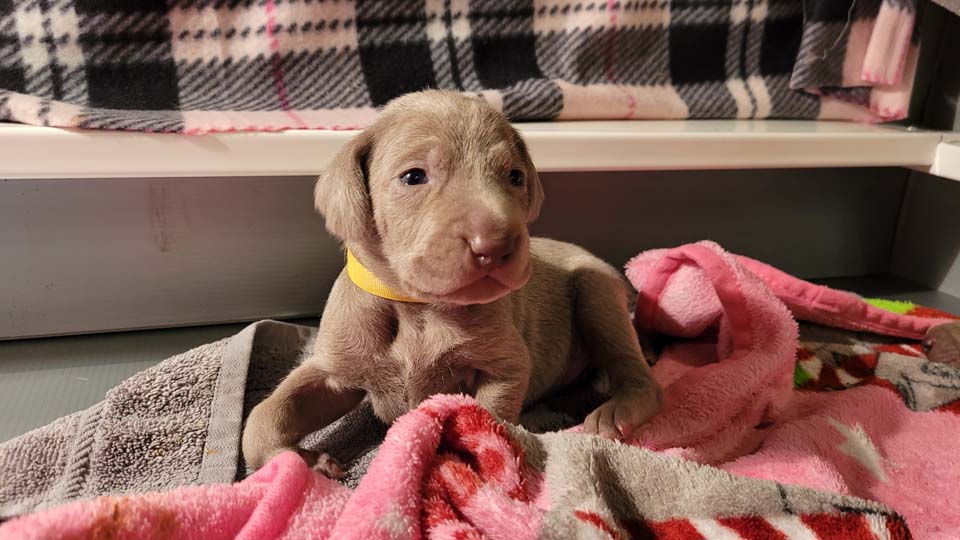 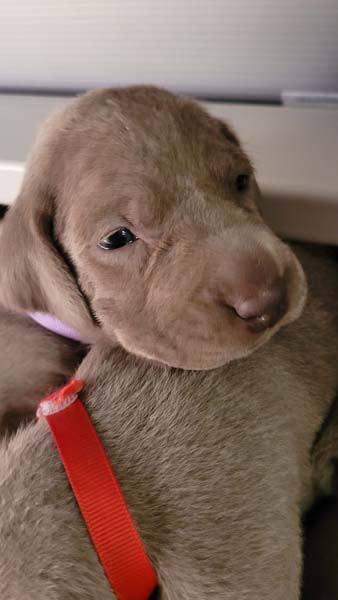 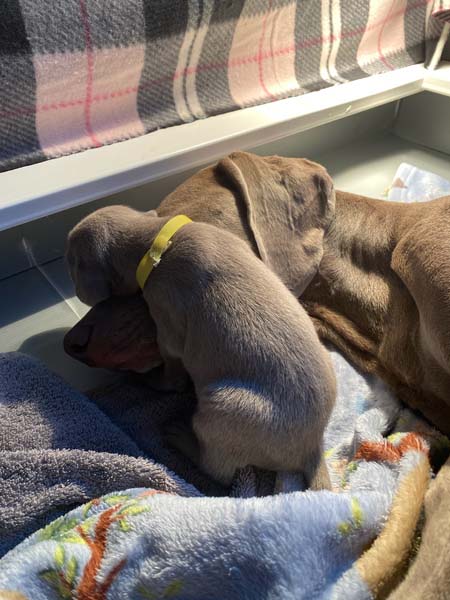 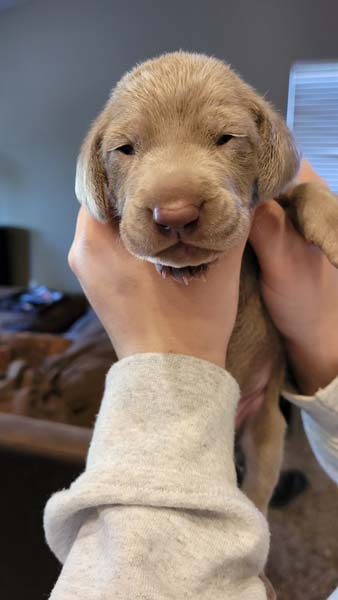 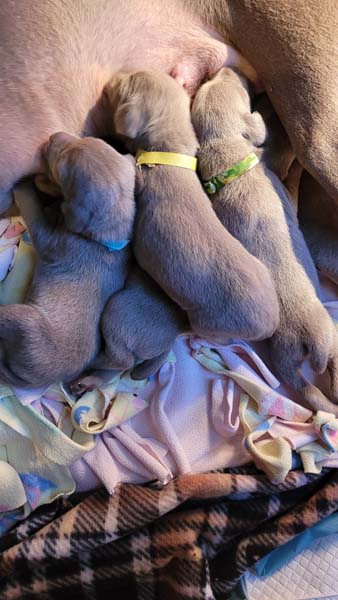 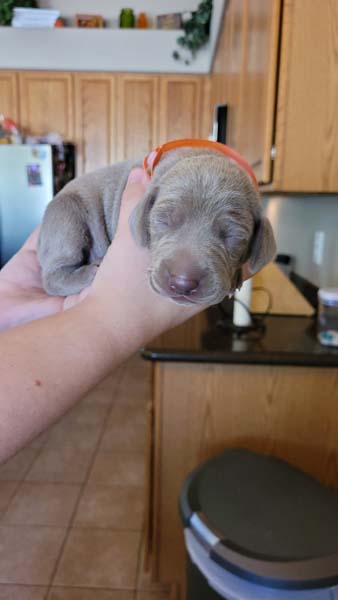 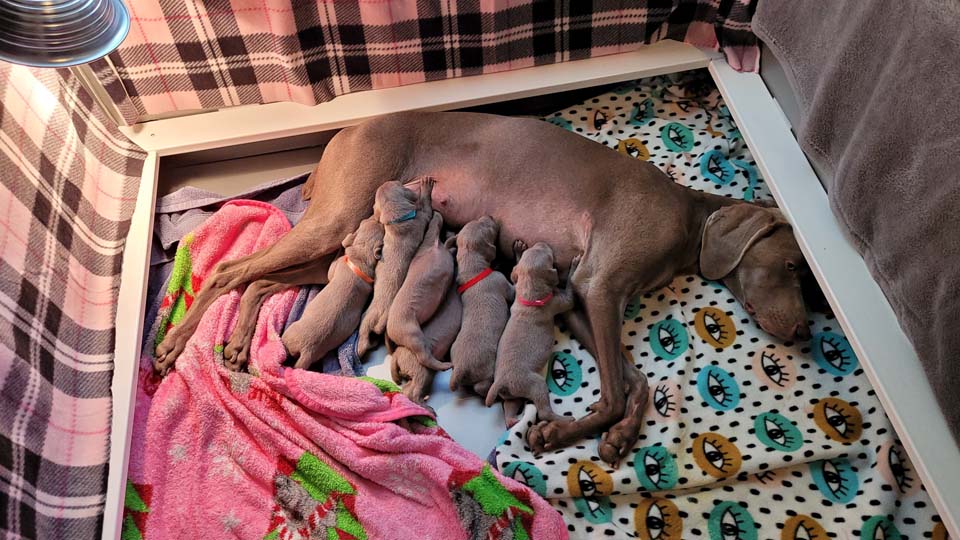 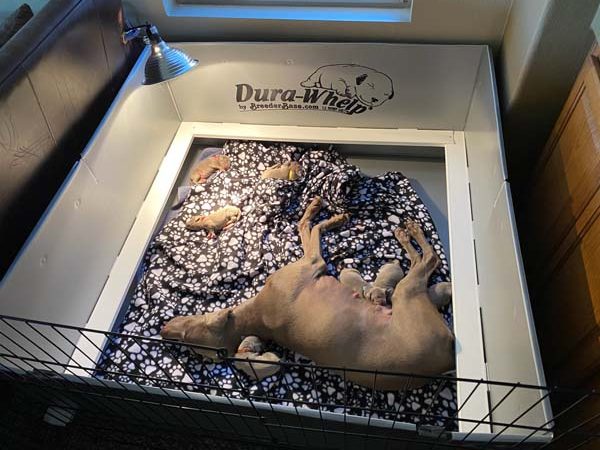 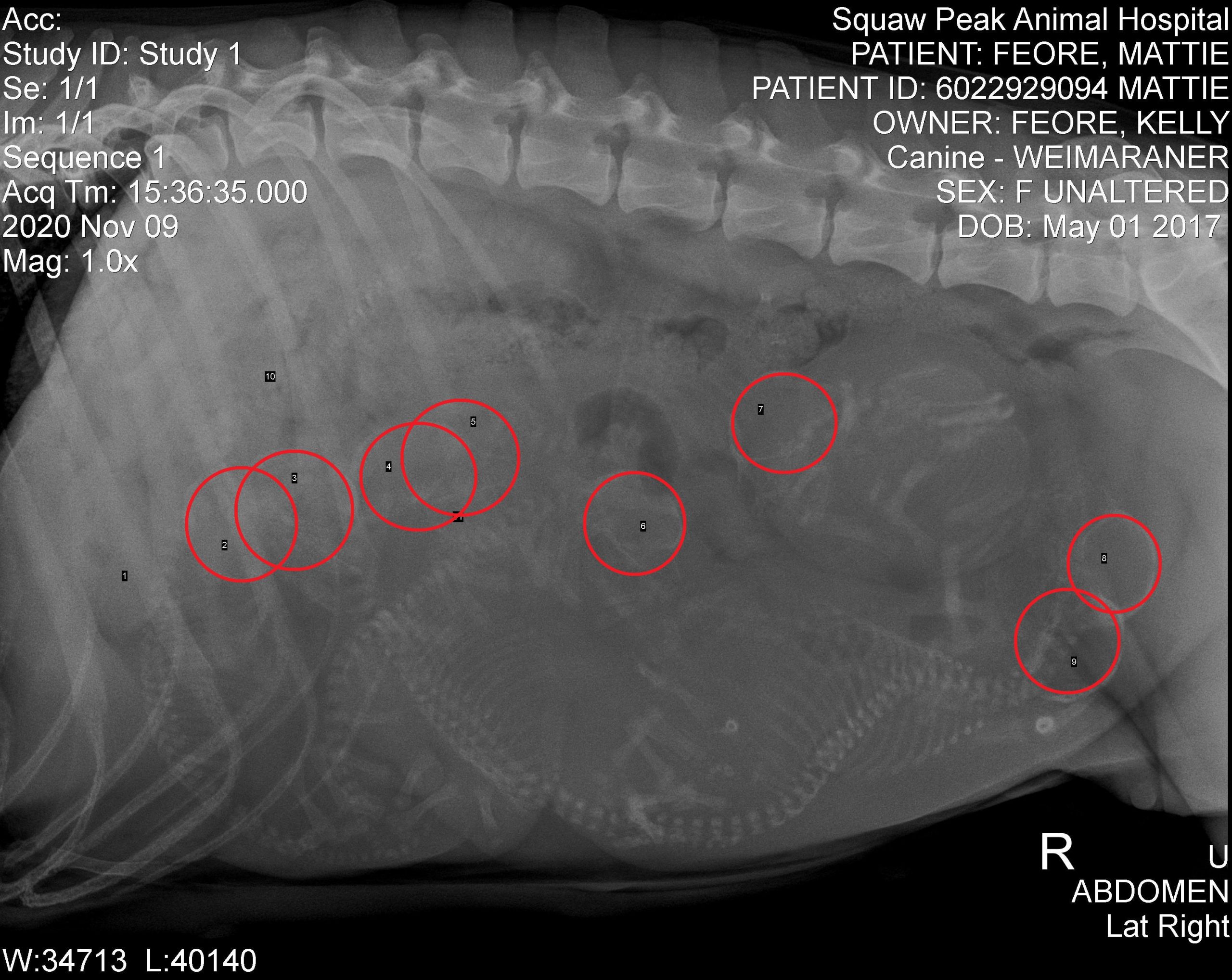 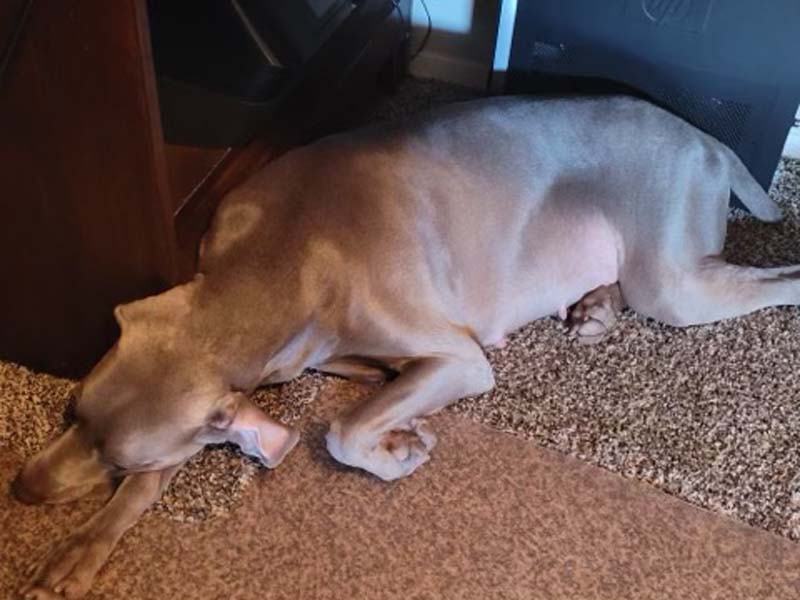 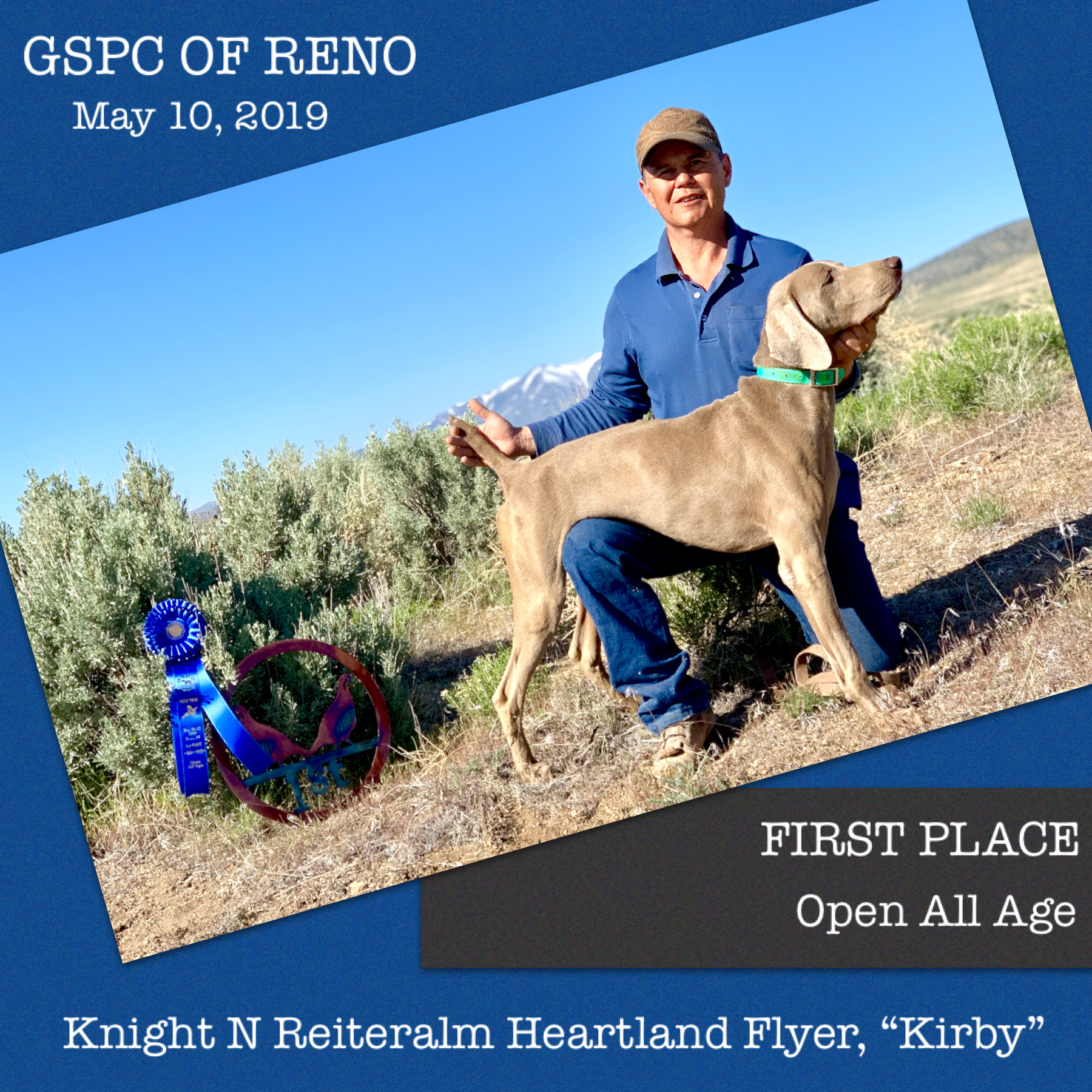 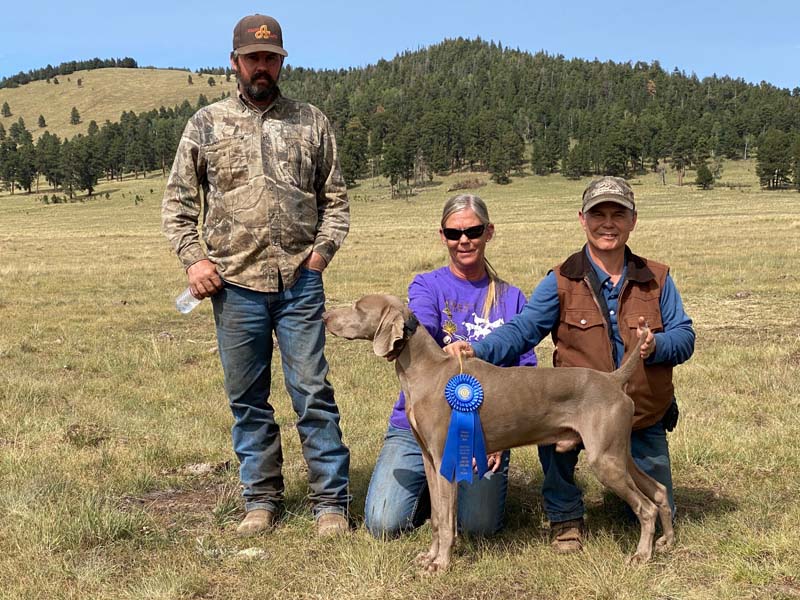 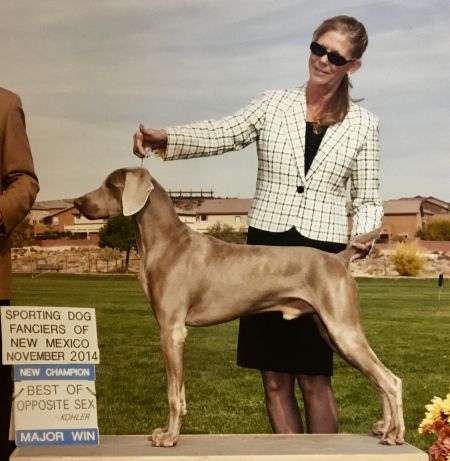 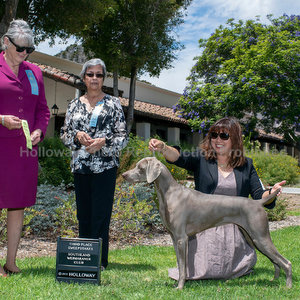 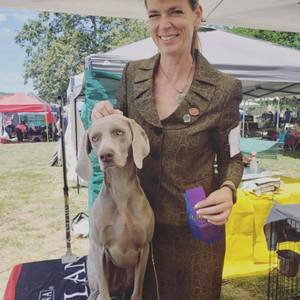 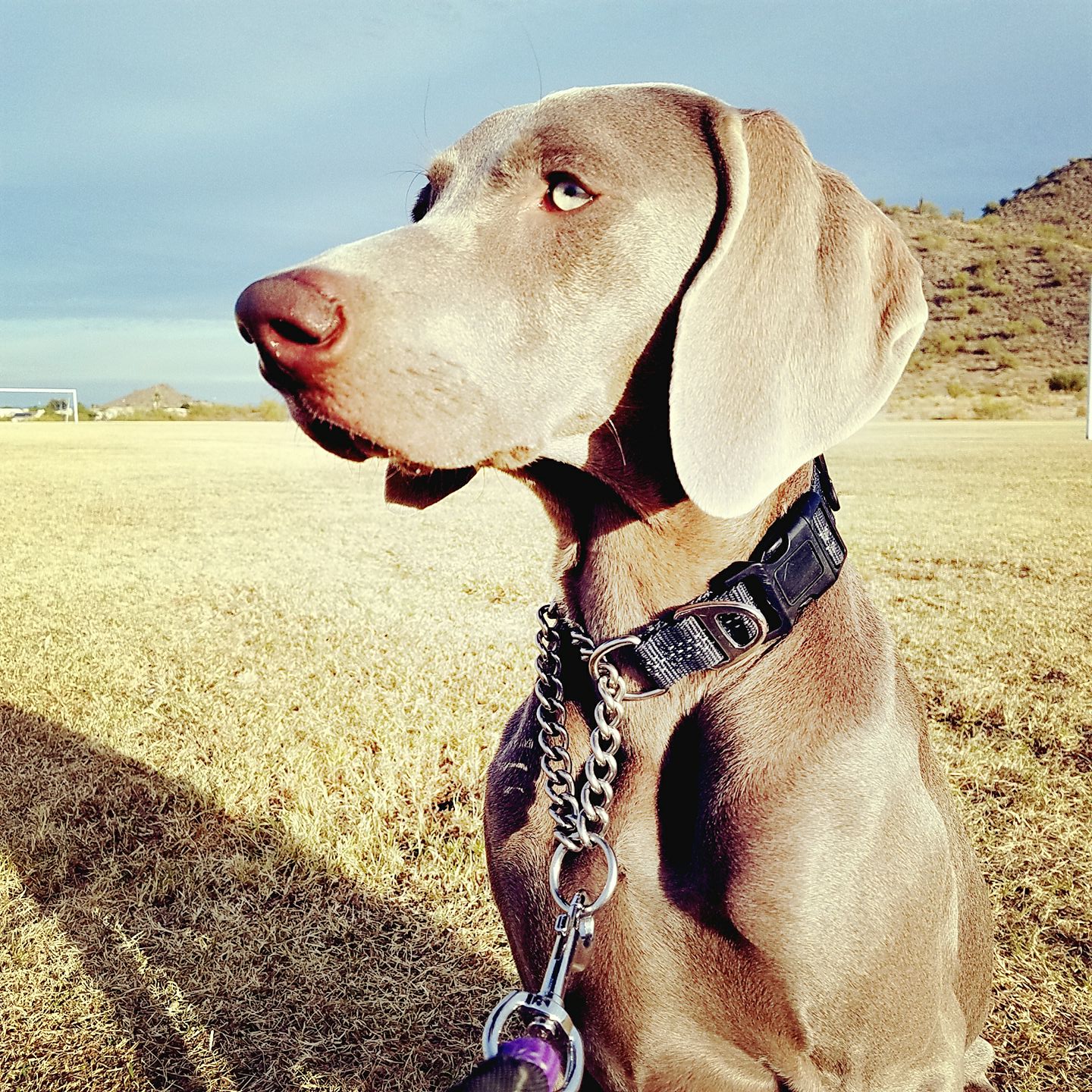 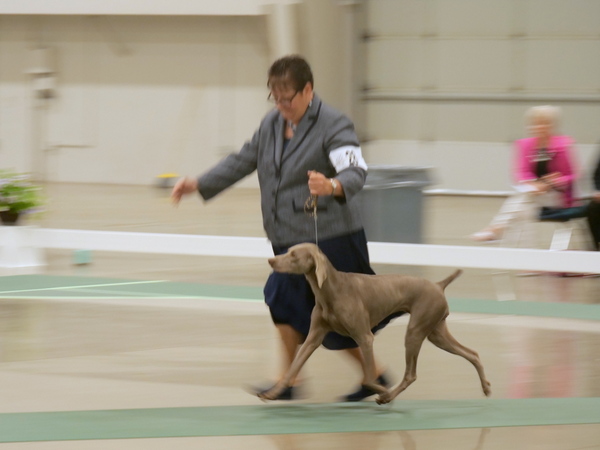 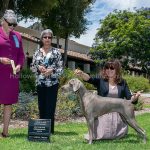 More about Mattie. Mattie’s grandmother is our foundation bitch, Friday. If you’ve been following Trailing Friday for any length of time now, you’ll know that our entire lives revolve around her, her kids, and her grandkids. We photo-journal the crap out of them. Mattie in particular is incredibly photogenic. She’s also smart, stubborn and mischievous (aren’t they all?). 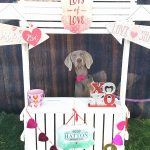 Mattie’s Story. Mattie (Lenka x Boulder) was bred by Jim and Deborah Ebert of Smokey Topaz Weimaraners in Arizona. She now lives with the Feore Family in Glendale, Arizona, with a human mom and dad and two human sisters. She also lives with her half-brother Barkley, who is also a Barrett Weimaraner. And a cat. Who she respects.

Mattie’s family will be raising the litter in Glendale, Arizona. Puppies are due in November 2020 and expected to go to their new families in January 2021.

The purpose of this breeding is to preserve a moderately sized hunting Weimaraner with a friendly disposition, beautiful headpiece, good substance, and excellent endurance.

The best puppies out of this litter are expected to do very well in AKC field trials and hunt tests. Some may even be competitve show dogs. As companion dogs, we expect them to be active, loyal, and family-oriented. 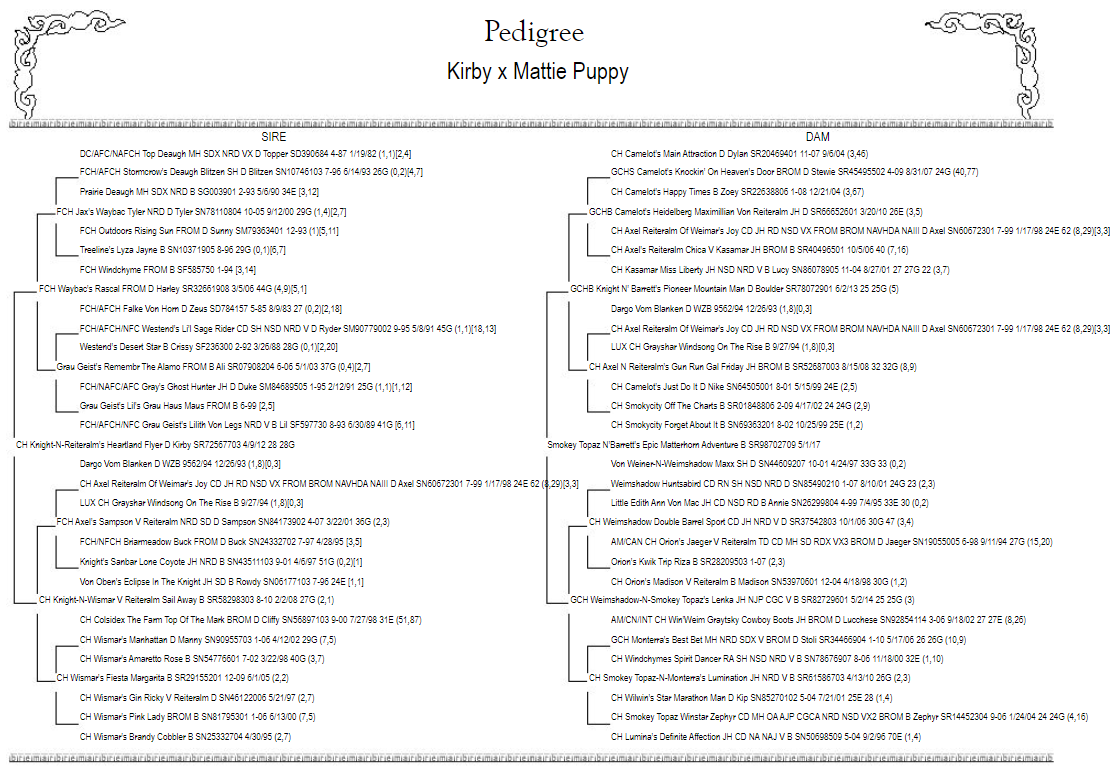 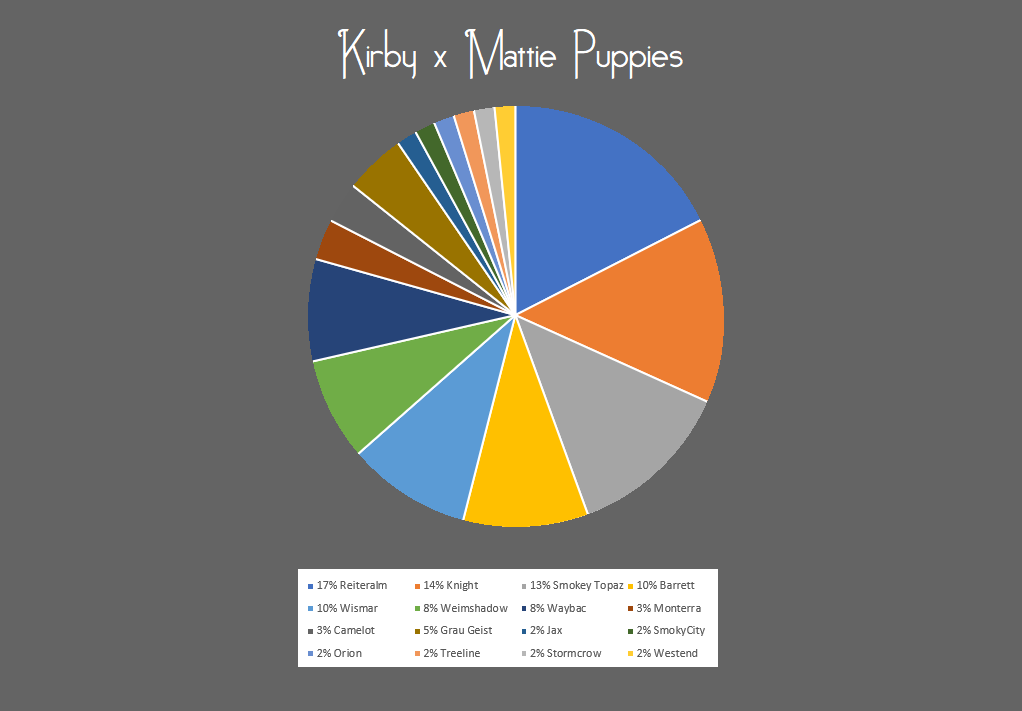 This is a four generation analysis of the dogs behind both Kirby and Mattie. In summary, it’s a varied pedigree (the COI over ten generations is only 4.77%) that’s loaded with excellent field trial and hunting dogs. Reiteralm, Knight, and Smokey Topaz make up 44% of this pedigree, followed by Barrett and Wismar contributing another 20%.