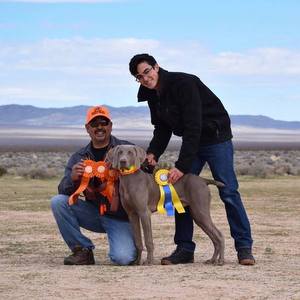 Hello, Barrett friends!!! Since our last entry of “Where Are They Now,” we’ve had the following developments:

February 2017: It was the month of the puppy. We spent some time getting to know our two Canadian imports: Trax Blaise Pascal and Trax Even Steven. Both boys spent a fair amount of time traveling and getting exposed to birds in California City. Blaise also attended his first show handling class (with good success!). We found a WONDERFUL home for “Navy Girl” out of our 2016 Boulder x Seren litter. Her name is now Barrett’s Primorial Princess, “Elleven.” We also packed up the family to spend almost two weeks in the desert, first to attend the 2017 WCA Western Classic Field Trial. More about that in another post. Cowboy (2016 Boulder x Seren Orange Boy) went to his first dog shows and earned some Winners Dog ribbons. Not to be outdone, Baja (2016 Rossi x Mika Orange Boy) and Zanie (2014 Torque x Friday BumbleBee) also earned their Junior Hunter titles, passing in four straight legs. Congratulations to all for your achievements!!

Baja and his dad, Charles! 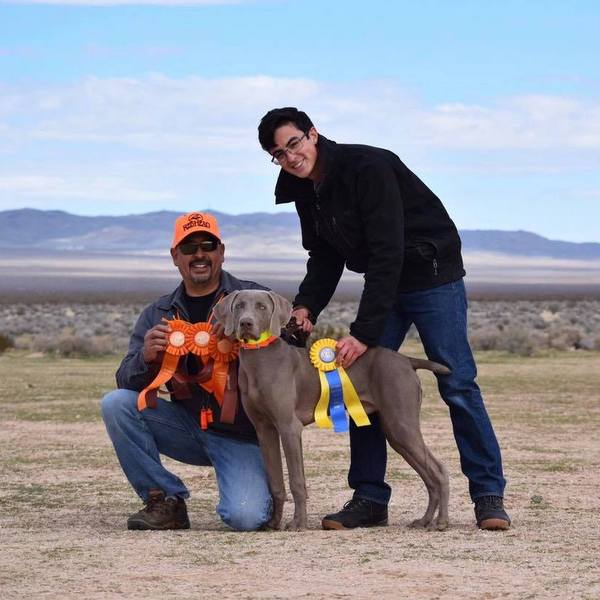 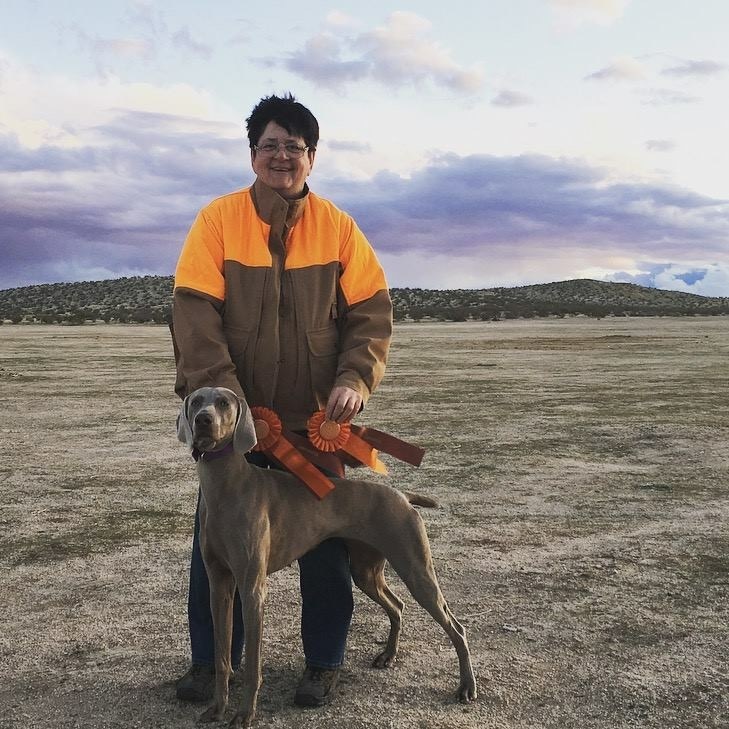 Zanie and her mom, Louise!!! 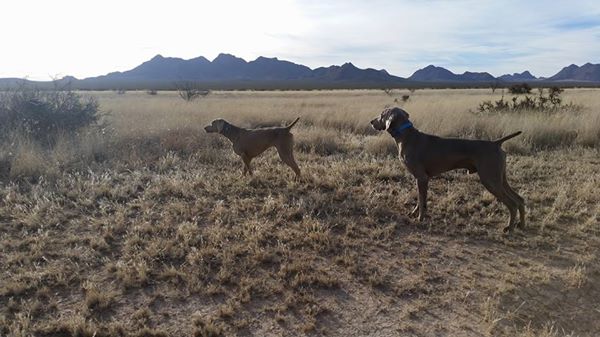 Terry Chandler sent in a postcard from BoulderMan in Las Cruces, NM, honoring his sister from another mister, Annie. 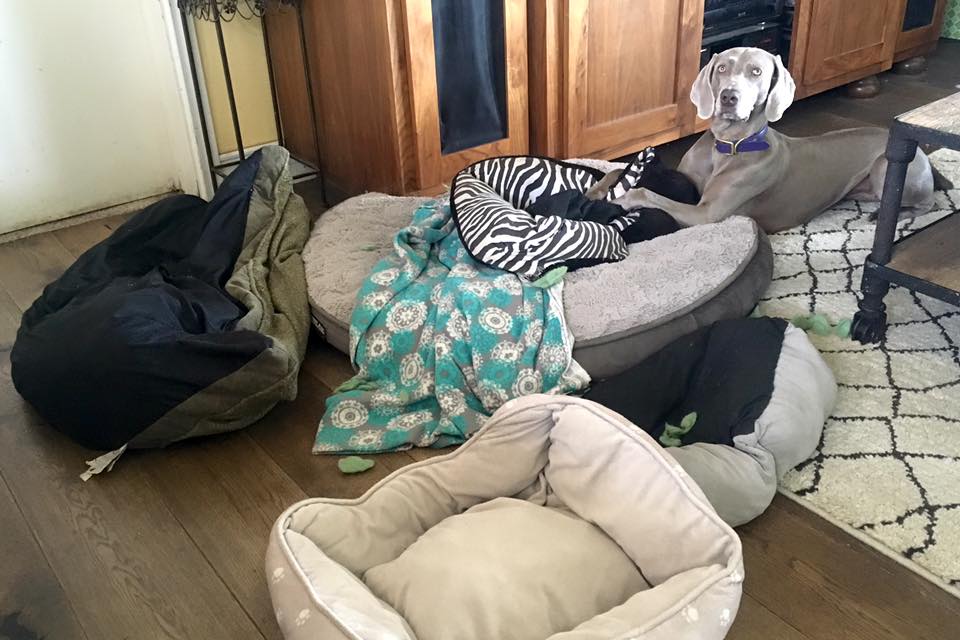 Back at Barrett HQ: There is no limit to the amount of beds and blankets Friday “needs” to get her nook on. She pulls them out of the crates every chance she gets to make her pile.

The first week of the month, we took Elleven and Blaise Pascal to Louise’s handling class! No time like the present to start practicing for their show careers. 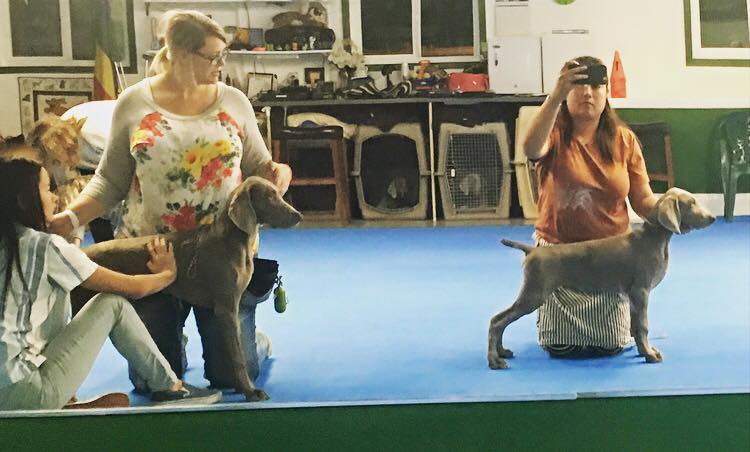 The second weekend of the month found us in McKittrick, California, to support LunaBot (2015 Bo x Mika Purple Girl) at the San Joaquin GSP trial. This was also the weekend husband Barry met our horse, “Newbie,” for the first time. Newbie is a 9-year-old Tennessee Walker. He loves to be scratched, likes apple cookies, moves like butter. (If you told me ten years ago that this city girl would be trading in her Jimmy Choo’s for a pair of spurs, I’d die laughing. Some days, I still don’t know how I got here. But I love every minute of it. 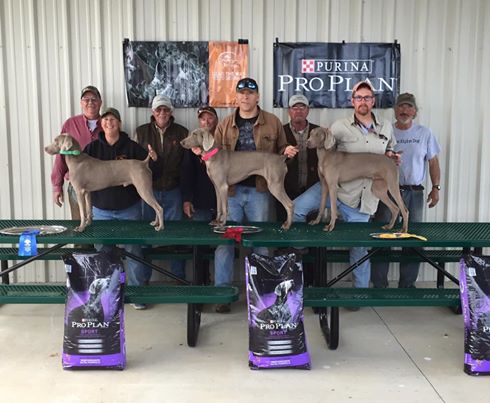 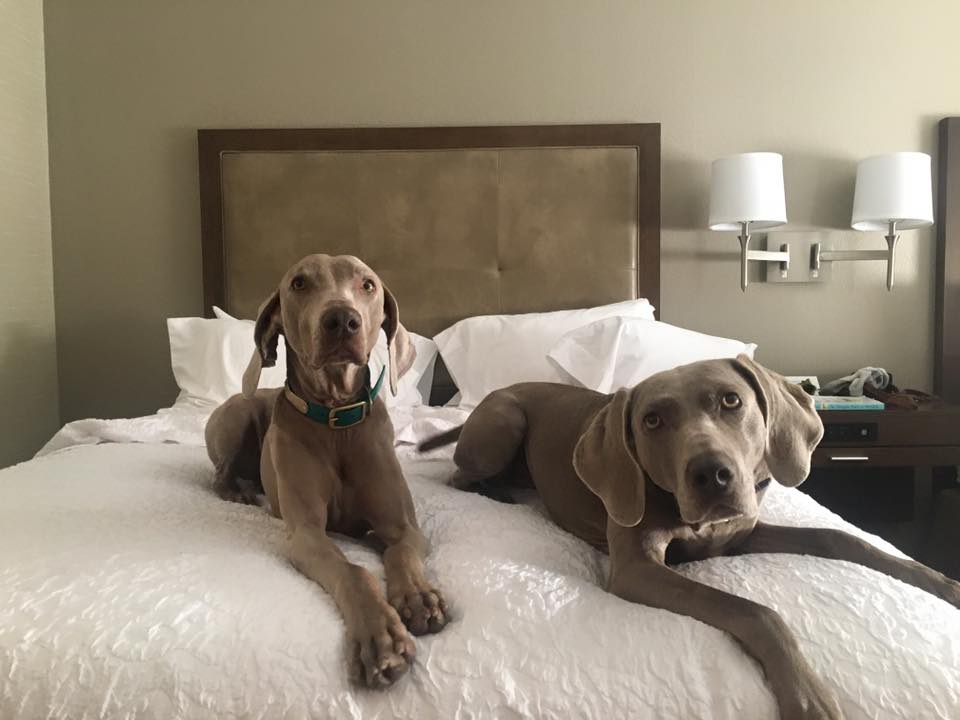 Towards the end of the month, I ended a job with a company I had been with for a couple years, and had ten days to kick around before starting the new job, so we took the dogs on a little adventure. Destination: UTAH!!! And then we popped up in Northern California for a weekend of dog shows for Bug (2014 Torque x Friday LadyBug), Tennessee (bred by Highpoint Weimaraners), and Graham (2016 Royce x Seren). Blaise Pascal (bred by Trax Weimaraners) came along for the ride to get a preview of what he could expect in his future when he’s old enough.

At the end of the weekend, Blaise Pascal flew home with Erin to Boston, and Bug stayed local. We’re now waiting for her to come into season. 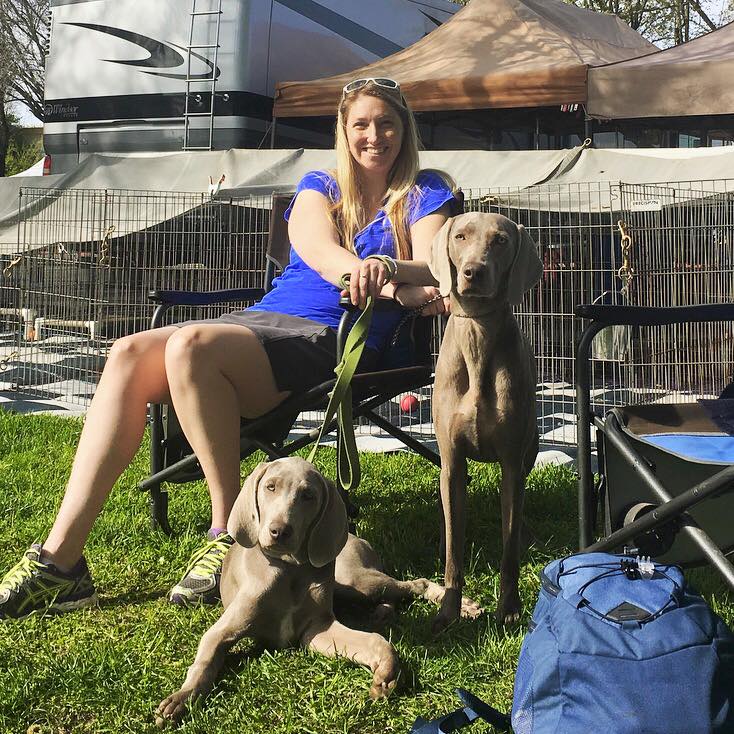 Finally, on the 30th, it was confirmed by Debbie Ebert of Smokey Topaz Weimaraners in Arizona that their girl, Lenka, was expecting a litter of puppies with BOULDERMAN (2013 Max x Friday Black Boy) as the sire. !!! Lenka is “CH Weimshadow-N-Smokey Topaz’s Lenka JH.” Her pedigree goes back to Reiteralm, Nani, Valmar, Wilwin, Outdoors, Bremar, and Windchymes!!! We’re very, very excited. 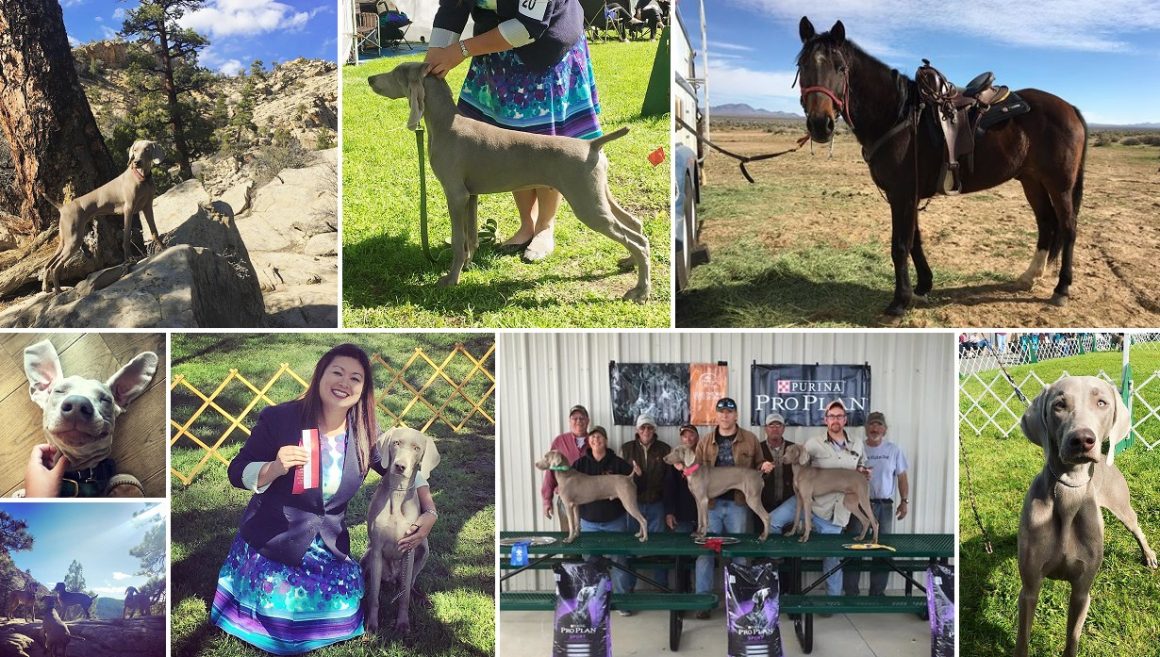 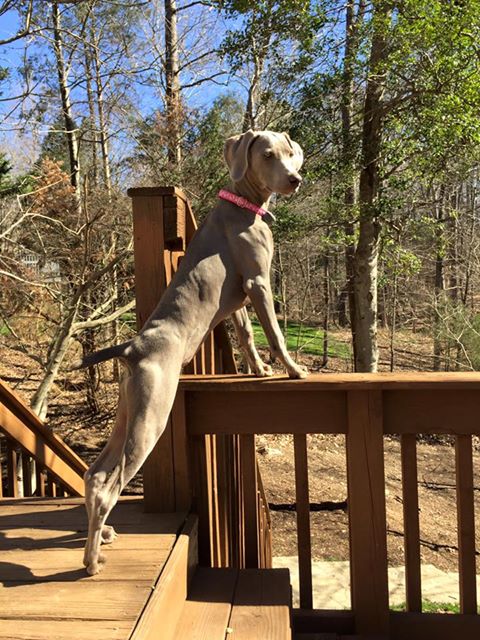 Postcard from Pebbles in North Carolina 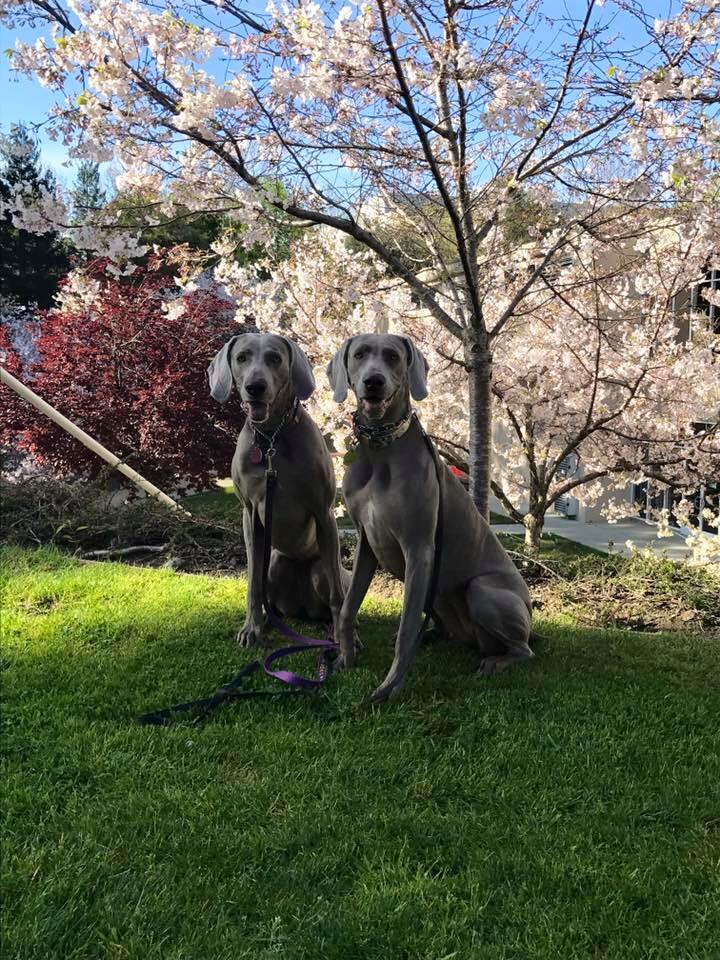 Postcard from Ellie and Tule in Northern California 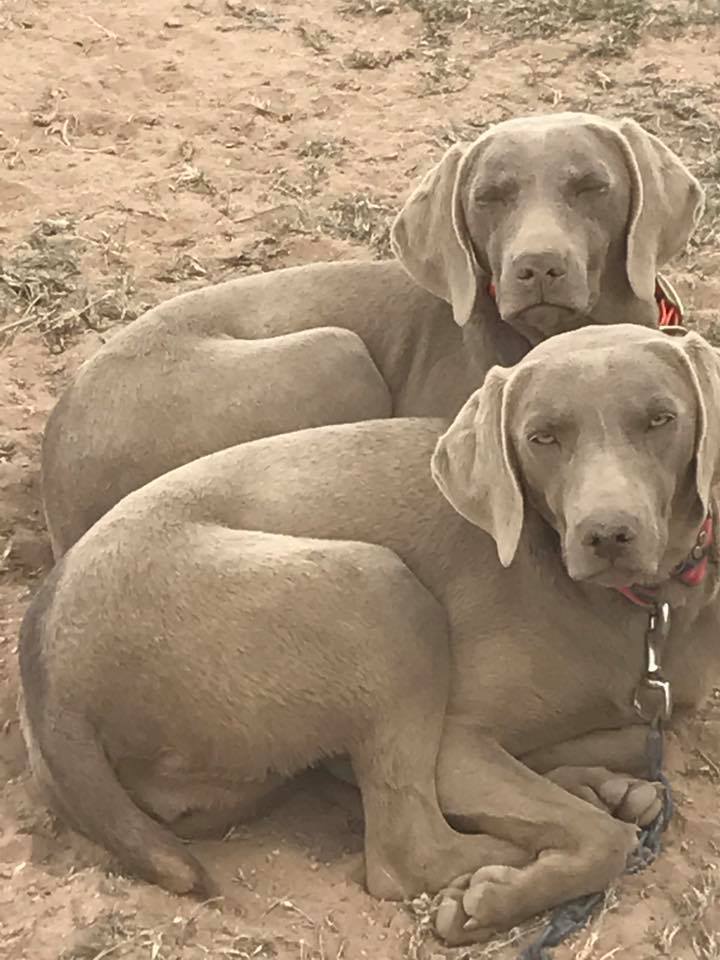 We also taught Steven (bred by Trax Weimaraners) how to swim! Actually, to be more accurate… he went into the water and taught himself how to swim. We also did a mini photo-shoot with Bug (2014 Torque x Friday) so we could submit her photo to the WCA; she gets to be on the front cover of one of the issues for this year as recognition for being a Dual Futurity Award Winner. Baja (2016 Rossi x Mika Orange Boy) participated in a NAVHDA Natural Ability Test. He received a PERFECT SCORE, with the exception of the fact that he did not point. With “no prize,” we’ll try again later in the year. Thank you Charles and Kristi for working with him! Jason brought Sookie (2016 Rossi x Mika Pink Girl) home from Winter Camp and started working with her. This one’s a pointing fool. 🙂 Back at home, Anne of Touchstone Weimaraners is crashing with us for the next couple of months so she could raise her litter of Mojo x Olivia puppies. 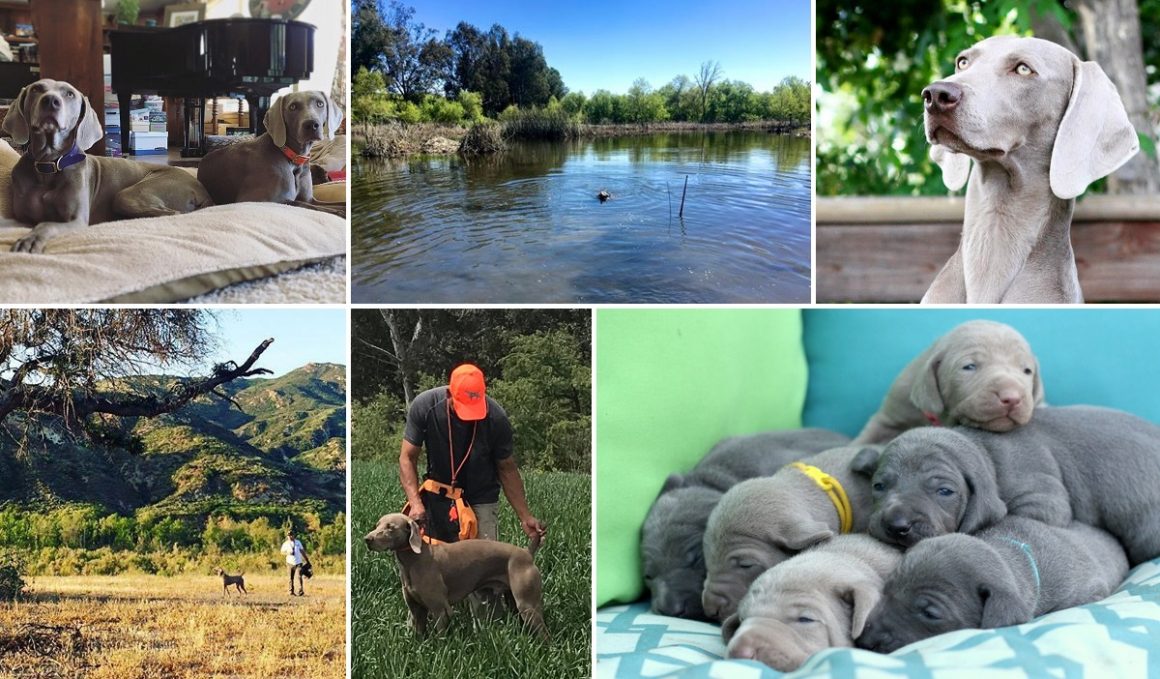 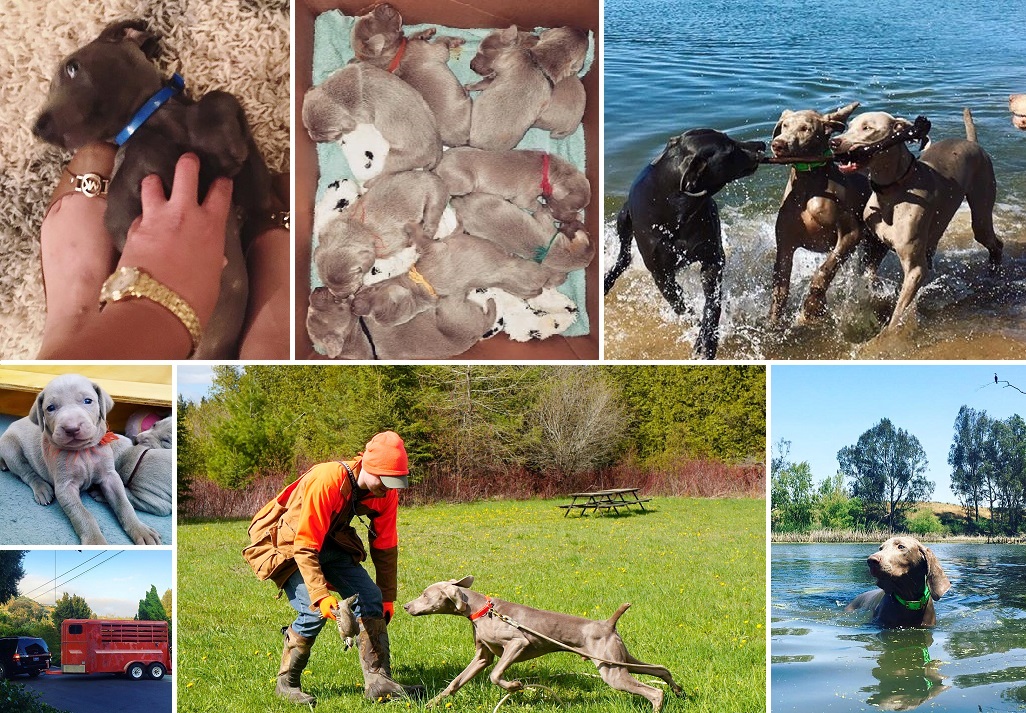 On May Day, Boulder (2013 Max x Friday Black Boy) and Lenka (Smokey Topaz Weimaraners) welcome their nine kids (5 boys and 4 girls) into the world! Steven continued his love for swimming with lots of local training days at Prado Regional Park, Anne’s puppies grew up and went home… except for a little blue girl named Zipper (!!!), we picked up a red trailer for Newbie from John and Holly (thank you!!!), and then we shuffled off to the Red Tank Field Trial in Arizona to support Boulder in his first run as a broke dog. A few days later, we made our way back to Utah and swam the dogs in the reservoir. They all had a great time. 🙂 Up in Canada, Michael and Amy met up with April and JR of NorthLink Weimaraners and took Leibniz (2016 Boulder x Seren Black Boy) out for a local fun day on birds. Thanks for the photos! 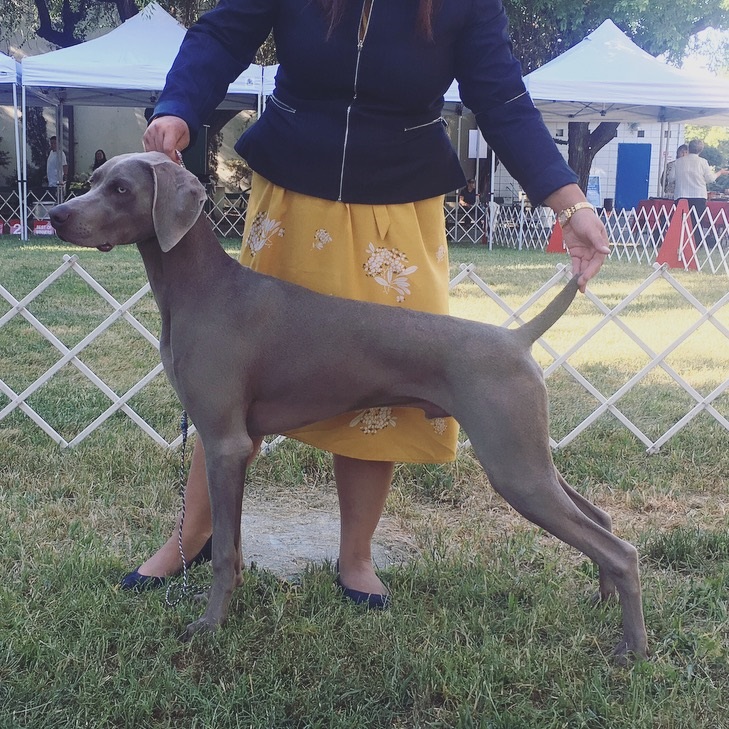 We also had a good showing at the Vallejo shows. Elleven came home with a Major, Cowboy earned some points, and Bug picked up FOUR NOHS Group ribbons! (Group 2, Group 4, Group 4, and Group 4). 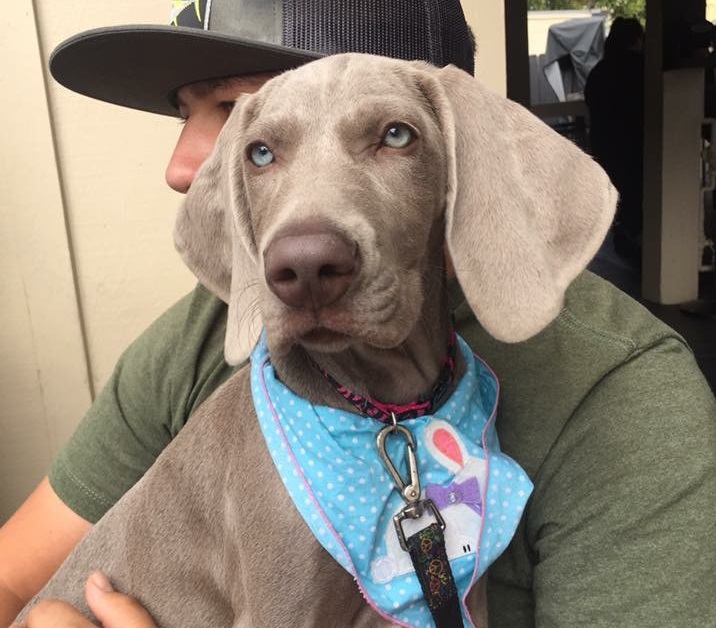 We also welcomed into “the Barrett family,” a little girl named Kelibek. She comes to the extended family as a gift from Dawna and Holly of PM and Knights Weimaraners. More on her, soon. 🙂

Oh yeah, we also put in an offer for ten acres of land in Boulder. (Consider this blip the official announcement that we’re moving to Utah.) 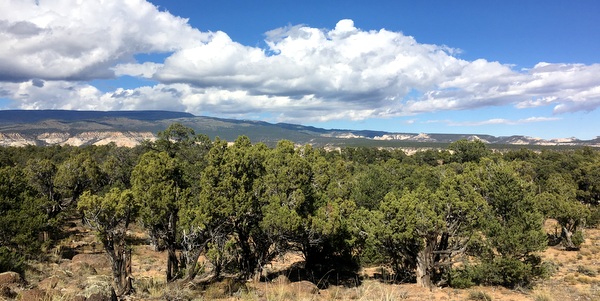 And finally, an update to the Barrett roster below in red:

BOULDER (2013 Max x Friday). Still lives in Las Cruces, New Mexico with his BFF Terry. Having the time of his life. Postcards say “love you mom, but ain’t coming home.”

TENNESSEE (2016 Logan x Story – import from WA).  Tennessee has moved back home and lives in the house with the rest of the Barrett pack.

SHILOH (2016 Rossi x Mika). Still in Las Cruces, NM with Pappa Terry and litter-mate sister Sookie. Learning how to be a field dog.

PEBBLES (2016 Boulder x Seren). Pebbles has found a home and is living it up in North Carolina now with two Weimie sisters!

MACY/RORY/THEORY (2016 Boulder x Seren). This baby girl is now “Elleven” and has found a home where her family has committed to showing her. She also picked up her first Major at the Vallejo shows in May!!!

PASCAL and STEVEN (2016 Imports).  They’re still babies, we’re still figuring out what to do with them.

KELIBEK (2017 Import). Kelibek comes to us as a gift from Dawna/PM Weimaraners and Holly/Knights Weimaraners. She’s currently still just a baby. We’re giving her some time to grow up before we decide if we want to start sticking her into the show ring.

ZIPPER (2017 Touchstone Weimaraners breeding). ZIPPER is one of the blue girls out of Anne’s Mojo x Olivia breeding. As of this writing, we’re “growing her out” to see what she’s capable of.

Other Barrett kids with honorable mentions:

BUG (2014 Torque x Friday). Owned and loved by Erin. Won the 2015 Western WCA Field Futurity and placed in her Show Futurity. Working on her “cover photo” in this year’s Weim Magazine. Bug has been leased out to Louise Brady of Star Weimaraners for a litter of puppies. She’s currently in season and will be reporting to Washington State for breeding!

ZANIE (2014 Torque x Friday). Owned and loved by Louise. Has a Derby ribbon, finished her GCH, placed in her Show Futurity and polishing up her field work with sister Squeek on weekends with Craig.

STARK (2014 Torque x Friday). Owned and loved by Carlos and Jana. Finished his CH quickly. Placed in Show Futurity. Has his JH. Now working on his SH. Just completed his first hunting season.

ELLIEPHANT (2014 Torque x Friday). Owned and loved by Mara and David. This past year, finished her CH, GCH, and placed in her Show Futurity. Now working on some more fun things, like agility!

TICON (2015 Bo x Mika). Owned and loved by Halit. Currently with Chuck and Diane wherever they are this season. First run with Diane in Ardmore resulted in a Third Place Derby ribbon! Second run with Diane in AZ resulted in a FIRST PLACE Derby ribbon. Kid’s ready for his Futurity run next month. Ticon placed in his Field Futurity at the WCA Western Classic and is now working towards being a broke dog.

RILEY (2016 Royce x Seren). Owned and loved by Ric and Christopher. Expertly handled by Rob to his Show CH in about 27 seconds. Seriously. Look out for him again when he grows up!

GRAHAM (2016 Royce x Seren). Owned and loved by Joel and Kamie. Loves his big sister Jordan. Graham went to the Vallejo shows in March 2017 and came home half-way finished! What a good boy. We’re waiting for the right opportunity to bring him back to the shows.

SOOKIE (2016 Rossi x Mika). Owned and loved by Jason and Sasha. Girl’s got serious potential. Currently honing her natural “skillz” with Uncle Terry in NM. Are you a betting person?! Put your money on this little rocket. NOW.

RONIN (2016 Rossi x Mika). Owned and loved by Brian and Trinity. Hit the show ring as a baby and nailed his first appearance!!!  Ronin came to the Western. He had a great time! Then he went home, earned his AKC Junior Hunter title and got into the ribbons at the local field trials!!

BAJA (2016 Rossi x Mika). Owned and loved by Charles, Kristy, and Anthony. Kid has serious size, a great nose, and a good attitude. He’s learning a lot with Craig, and no doubt will grow up to be a successful huntin’ dawg. . Baja went to the Western and had a great time! He also earned his AKC Junior Hunter title and is now working towards a NAVHDA Natural Ability prize.

LEIBNIZ (2016 Boulder x Seren). Owned and loved by Michael and Amy. Loves to terrorize his siblings. Maaaaaybe he’ll have a start in the field?!?! (Just for fun, because he can!) We’ll see when it warms up a bit and the snow thaws out.

BARKLEY (2016 Boulder x Seren). Owned and loved by Tom and Kelly. Adored member of his family. Waiting to age into the shows so the rest of us can see what he’s got!

COWBOY (2016 Boulder x Seren). Owned and loved by Holly and John. Kid can do it all. Eagerly waiting for him to grow into a handsome Prince and watch him conquer whatever’s in front of him. Cowboy went to the Vallejo shows in May and came home with a few extra points!

Other kiddos who have “moved on” this past year: Seren, Mika, Cali, and Hammer. The girls have retired from their professional careers and Hammer is livin’ it up in style on acreage as a hunting buddy. Pebbles has moved on, too.

For those of you who are wondering about 2017 breeding plans… The official answer is “sometime in future” with Bug and/or Gracie. Timing unknown. Until then, we have our hands FULL growin’ out the young ones and letting the kiddos just… Be kiddos. 😊 <– This is still mostly true. Bug has been leased out to Louise for a litter. Gracie’s still with Terry. We probably won’t have another litter until sometime in 2018.

Here’s to a fun summer! We plan to hit up the Southland Weimaraner Club’s Show Specialty, spend some time in Utah, and drop in to visit Terry about Boulder at Summer Camp. – Kim and the gang