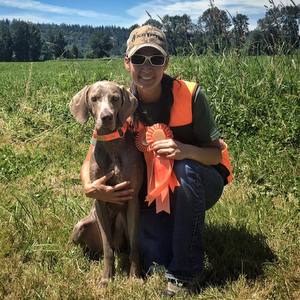 Hello, Barrett friends!!! Since our “Spring 2017 Update” we’ve had the following developments: 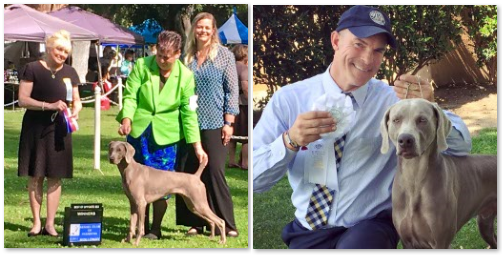 (What a way to start.) His half-sister, Elleven (2016 Boulder x Seren Navy Girl) also went WB/BOS. Congratulations to owners of Riley, Ric and Christopher, and owners of Elleven, Marchelle and Gracelyn. What a day. 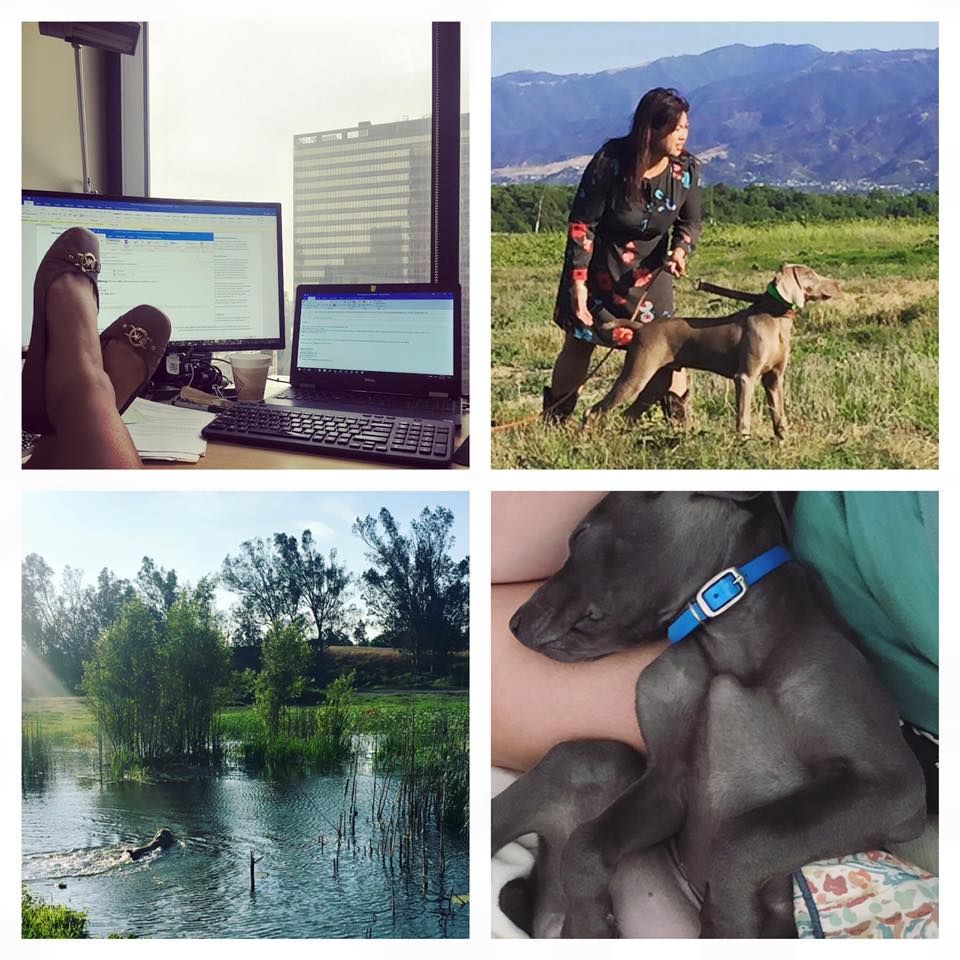 On the sixth, I celebrated by 36th birthday by going to Prado after work to meet with Barry, Garret, Carlos, and Jana to work with Britta, Friday, Steven, Tennessee, Blue, Stark, and Sage. (THANK YOU FOR SHARING YOUR DAY WITH ME!!!) At the lowest level, we built drive (ahem, Tenn), and at the highest level, we polished up our green broke dogs. Steven also took himself for a (self-assigned) swim in the pond. Then the group of us went out for Margaritas and Mexican Food.

On the 23rd, Ronin (2016 Rossi x Mika Blue Boy) ran in the Willamette Weimaraner Club Field Trials on Sauvie Island, OR and got a 4th place ribbon in Open Puppy! A couple of days later, he earned his 3rd and 4th legs of his Junior Hunter passes and finished his Junior Hunter title. Thank you Trinity for doing that with him!!! 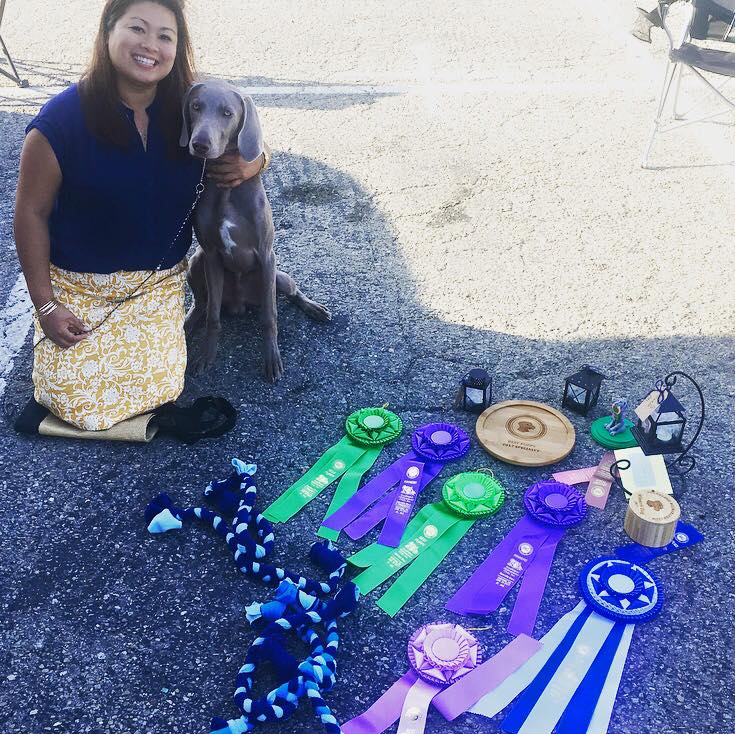 Over the last weekend in June, we took the kids to the Southland Weimaraner Club’s Specialty in Ventura, CA. Blaise Pascal (bred by Trax Weimaraners) had a good first weekend of being in the ring. He earned both of his Majors his first weekend out as a show dog, BOS in Puppy Sweepstakes, and also a couple of Best Puppy rosettes.

Tennessee also went to the show… but she scoffed at the second place ribbons she got. On a positive note, she’s also coming with us to Prado and is having a GREAT time looking for birds! 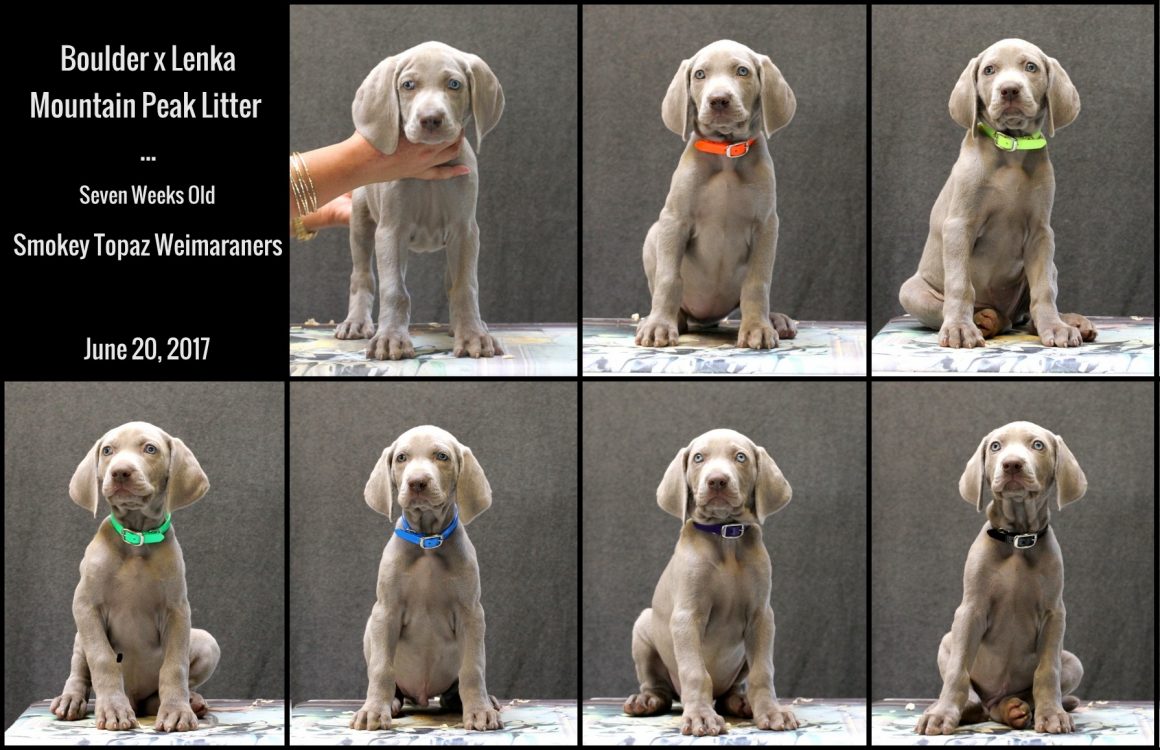 And… we spent some time playing with the sevenBoulder x Lenka puppies that made it to California.

We also road-tripped it to Arizona twice in the month of June to see and pick-up the Boulder x Lenka puppies! A full write-up of trip, is here.

July 2017: July started off pretty rough for us. We fostered an old Weimaraner named Libby for CalWEAR and unexpectedly lost her when she didn’t make it out of surgery for her soccer-sized tumor. On a brighter note, Ronin (2016 Rossi x Mika Blue Boy) participated in his first sweepstakes show and took home some loot! Because “Newbie” isn’t enough, we also picked up a new mare named “Bonnie” from Ohio. She now joins our pack as field trial horse # 2. (What have we gotten ourselves into?!) On a sunny Friday, I took the morning off of work to take Friday and Tennessee to a local studio. We shot an ad for Amazon’s new Alexa product. I have no idea when or where the girls will be featured, so be on the lookout for a couple of Weimaraners promoting Alexa. (Not sure I was supposed to share any of that. Oh well.) 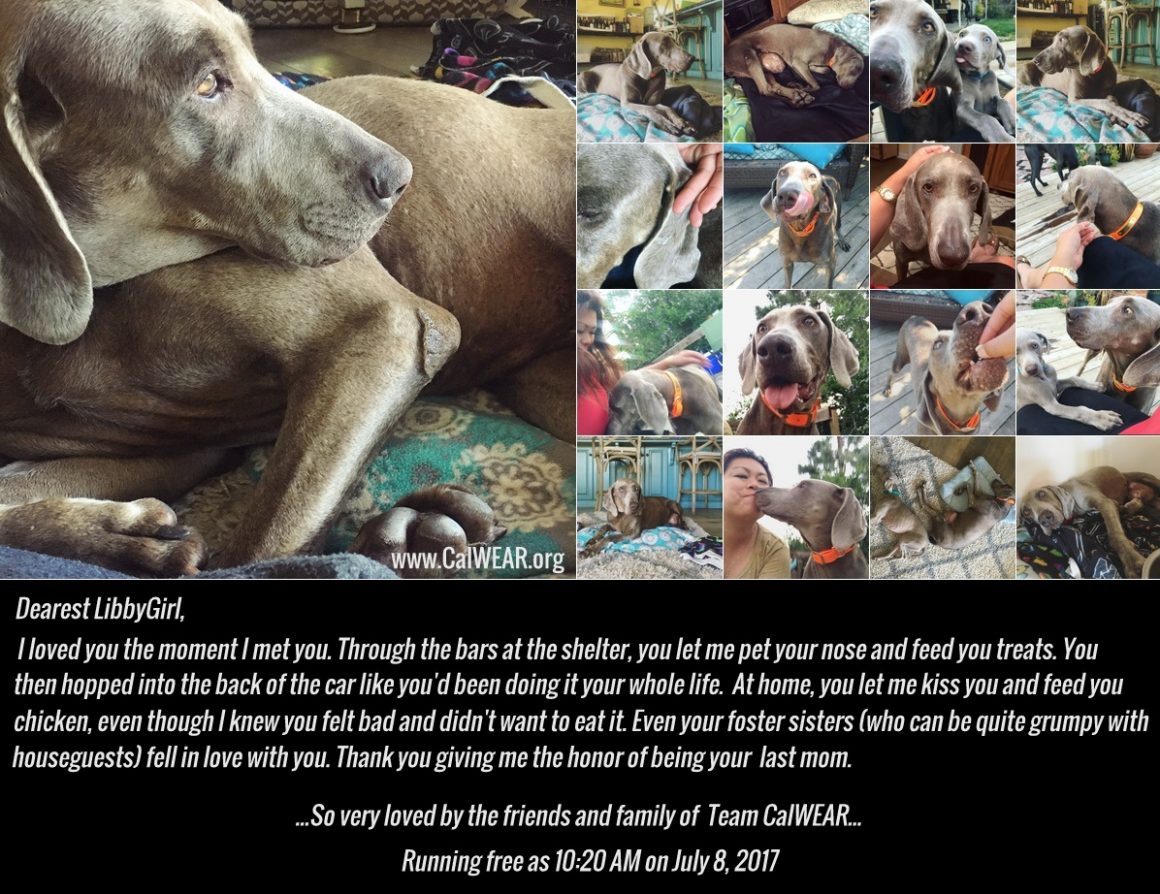 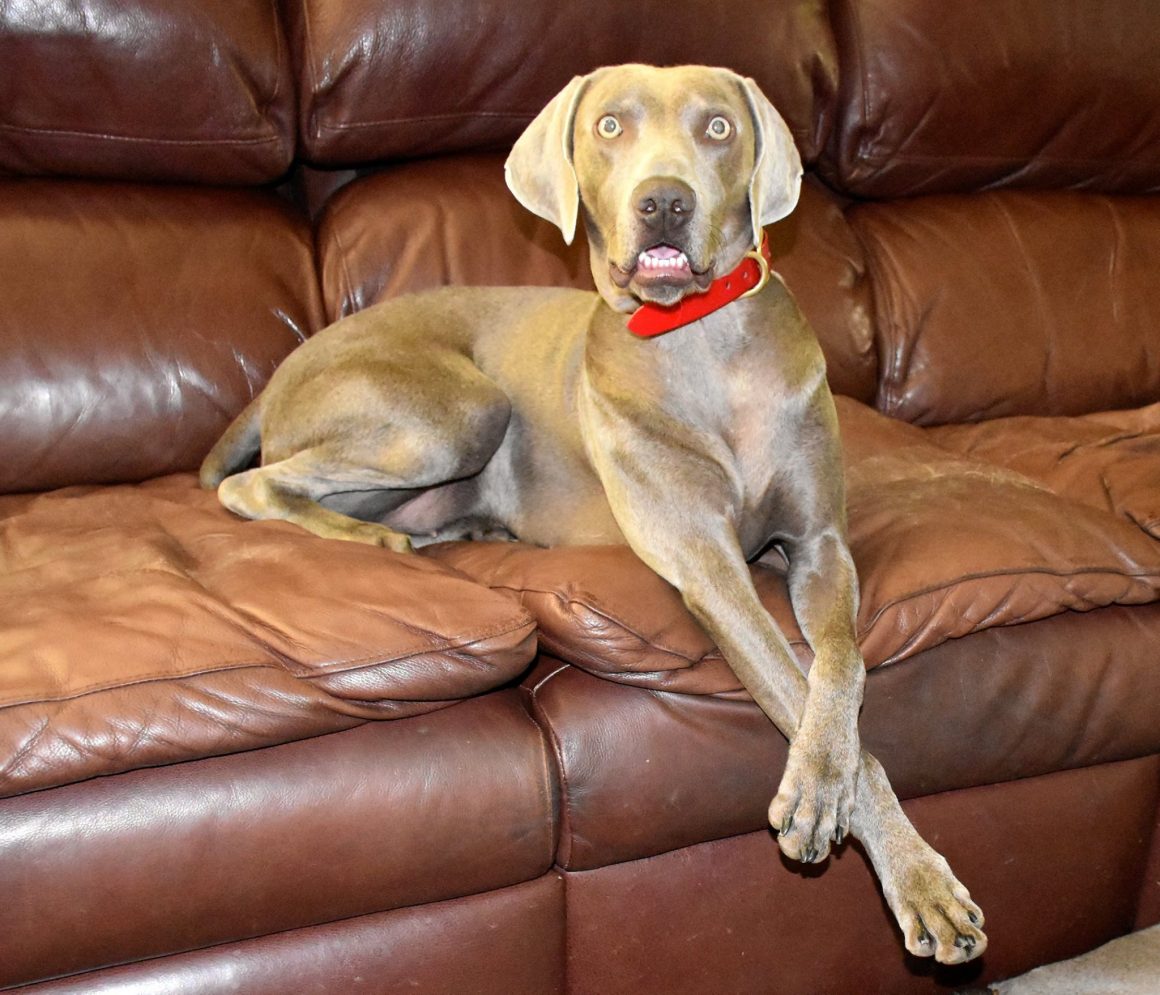 LunaBot came home to Carlos and Jana’s house for a little bit. She definitely wins the “nicest personality” award. 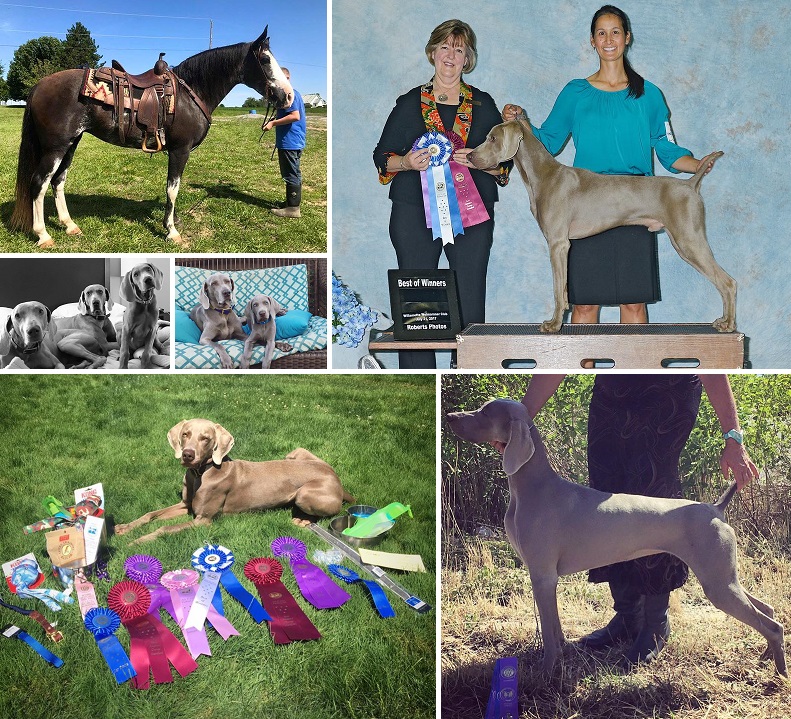 We also took a little trip to Flagstaff, Arizona and there, Tennessee earned her first two show points. Yay!!! From Flagstaff, we took a little side-trip back to Boulder to check-in on our new-to-us ten acres, traveled with a little puppy that didn’t get placed from the Boulder x Lenka litter… and came home with a new “permanent” addition to the household. WELCOME BABY MANGO!!! 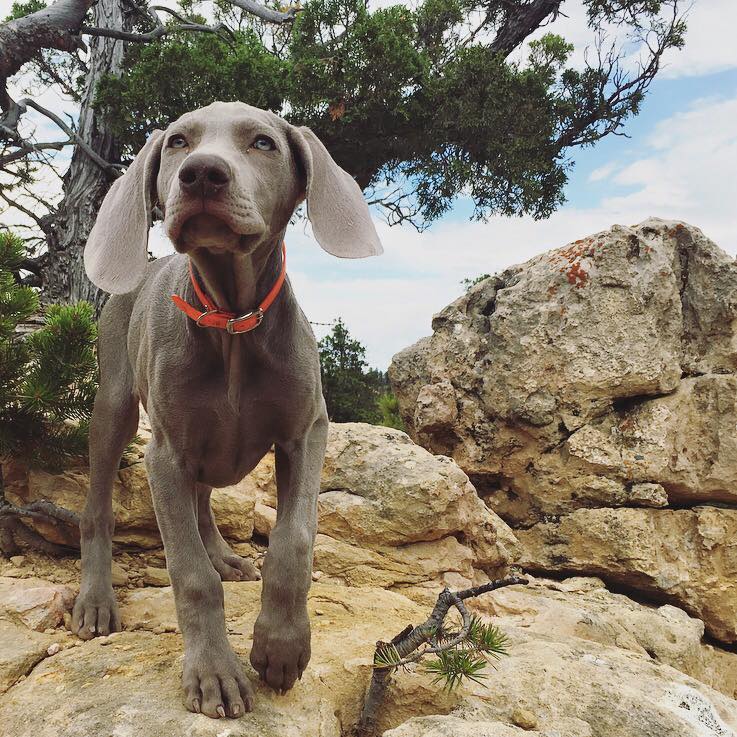 Little Mango finally earned herself a name on our 11th (

) Trailing Friday Road Trip when she decided to finish off the last of her (human) dad’s famous Mango Margarita. Her (biological) grandmother Friday turned away in disgust. [See also: Miss Friday is too sophisticated for that kind of nonsense.] Thank you Jim and DebE of Smokey Topaz Weimaraners for this little gem. And welcome to the gang, Little Mango.

August 2017: On the 15th, we wished MISS FRIDAY a Happy Ninth Birthday. 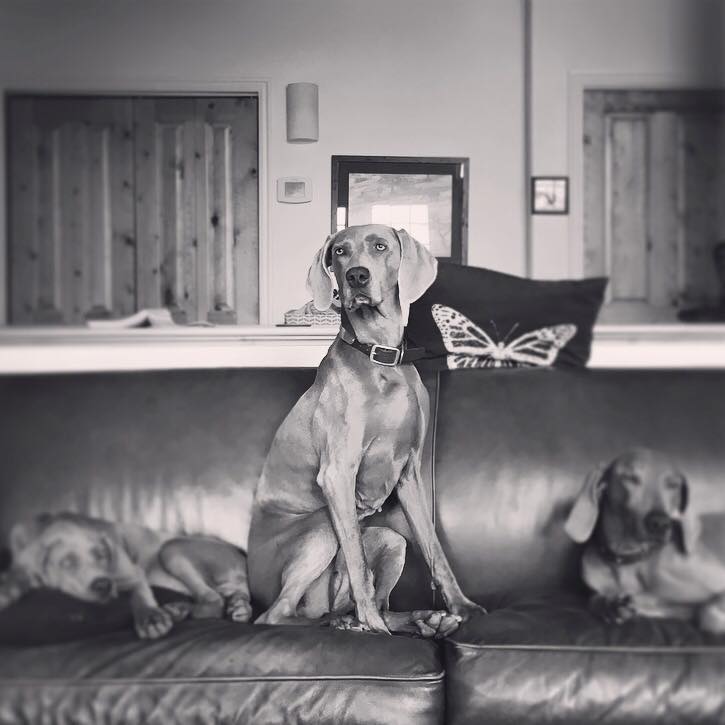 Nothing has given me greater joy than to be trailing you for these past few years. Thank you for being the best mom, grandmother, and SNUGGLE BUG. On behalf of your 23 kids and 18 grandkids, I’m wishing you a marvelous day of love, bunnies, lizards, and sunshine. Tell your Pappa to let you into my side of the bed tonight and to hold you tight. I’ll be home from work tomorrow and keep the party going. Love you to the moon and back, your mamma. Xo 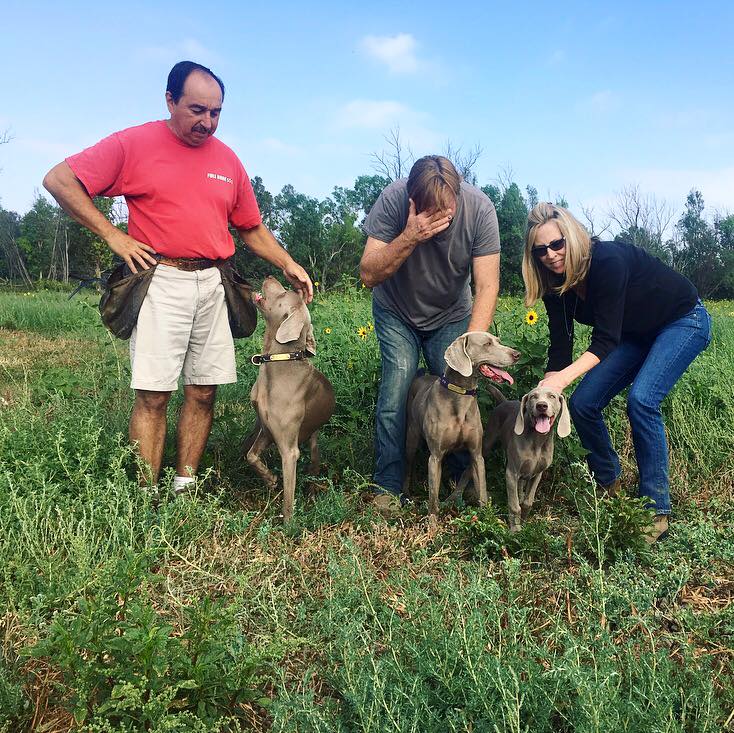 On the 21st, we had a little meetup at Prado and tried to take a Barrett Fun Day Family Photo. I thought it was pretty hysterical. 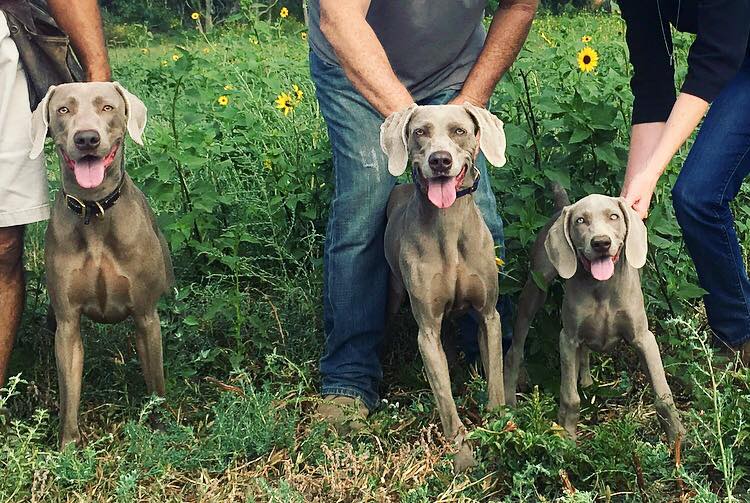 We also made our inaugural appearance at Terry Chandler’s Camp Snoopy! A full write-up of our time there, is here.

And finally, a current status on the Barrett dogs, here. Here’s to a fun Autumn! We plan to spend some more time in Utah and drop in at a few shows. – Kim and the gang